I suppose it’s only proper to note that the author of this book is a friend of mine, but I did purchase it on my own at full price for what that’s worth. So, there’s probably no way I’m going to say that this book is garbage, even if it is garbage. Fortunately for us all, it is not garbage. 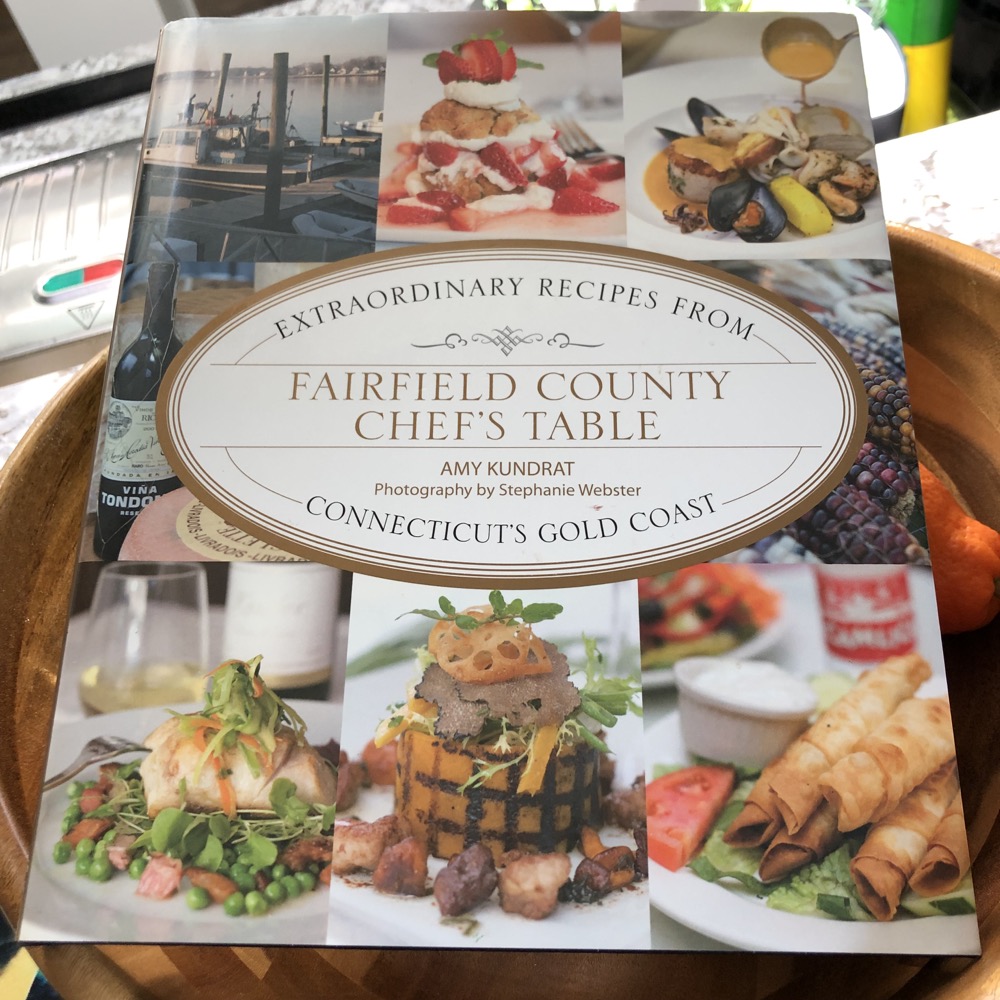 In fact, it is a very good book. And I say this not as a friend, but as a critic. This is a cookbook, sure, but it is very well written, eminently readable, and Stephanie Webster’s photos are beautiful.

I’m proud of Amy. While she’s infinitely cooler than me (and you), what with her cross-county road trips with her husband on their Ducatis, her penchant for mid-century modern furnishings, and her fancy job as Director of New Media for Yale University, she and I have faced some of the same annoyances and struggles in this often doofy world of “new media.”

Amy was executive editor of CTBites (and might be still in some emeritus capacity) which was founded by Webster. At one point, she and I simultaneously went pretty deep into the idea of podcasting and bounced some ideas off of each other while lamenting the medium the whole time. She was told “you should write a book” probably more than I have been, but she actually went and did it. 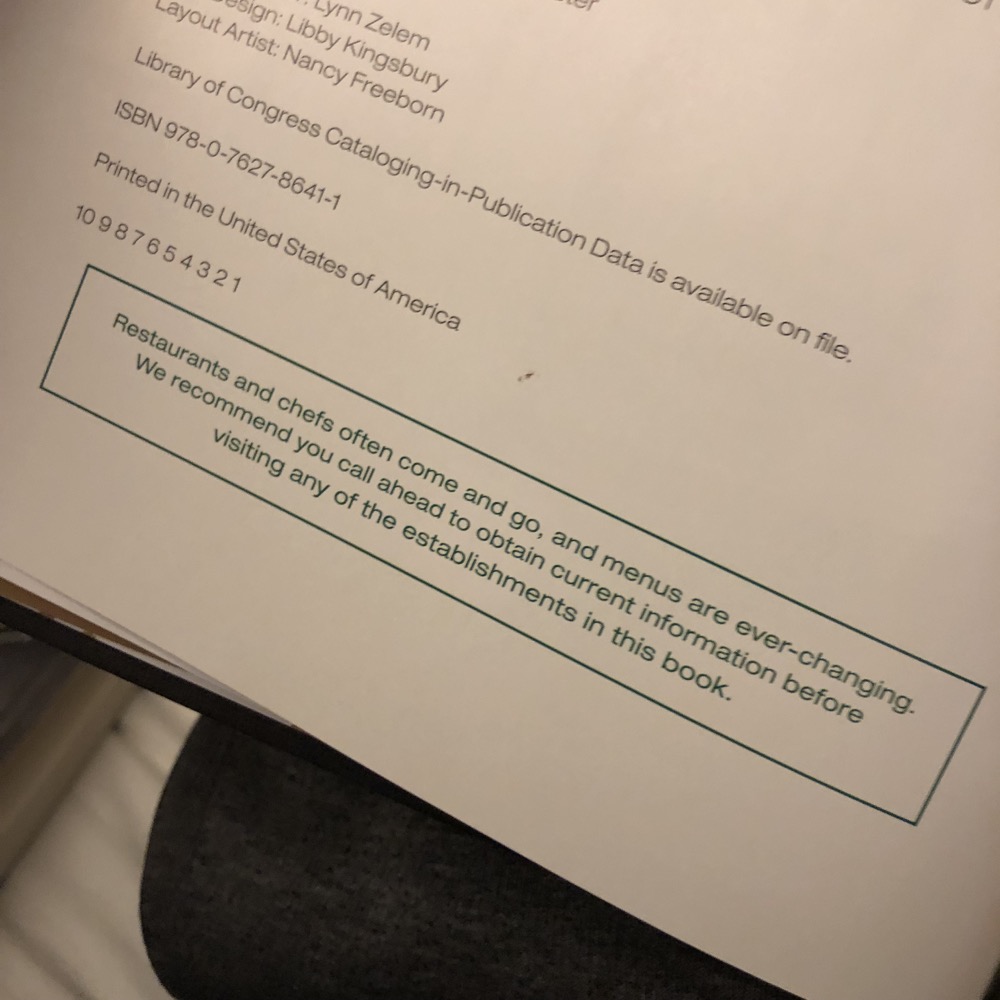 You see this? This is smart.

And in doing so she imparted some wisdom on me: relying on so many people makes writing a book like this really, really hard. All the photoshoots with chefs and their food, getting recipes from them that make sense – and all within a deadline? Impossible. Yet, she succeeded on all fronts.

Fairfield County stakes a claim to some of Connecticut’s most diverse terrain, an enviable proximity to New York City, and a discerning community of food lovers driving the demand for a vibrant dining scene. The Gold Coast boasts some of the country’s toniest neighborhoods, such as Greenwich and Southport, as well as the state’s largest cities, including the historic port city of Norwalk, the corporate-minded Stamford, and the diverse Bridgeport.

I’m glad Bridgeport made it into a book that references “The Gold Coast” and features a lot of expensive restaurants in the towns mentioned above, but since the large majority of people that will be interested in this book live and work in those tony towns, I wish there was more from the BPT (and Danbury for that matter). We all know most Fairfield County residents want to jettison the state’s largest city to the moon, but I can’t think of a better way to get them to come to appreciate Bridgeport than through its ethnic restaurants. 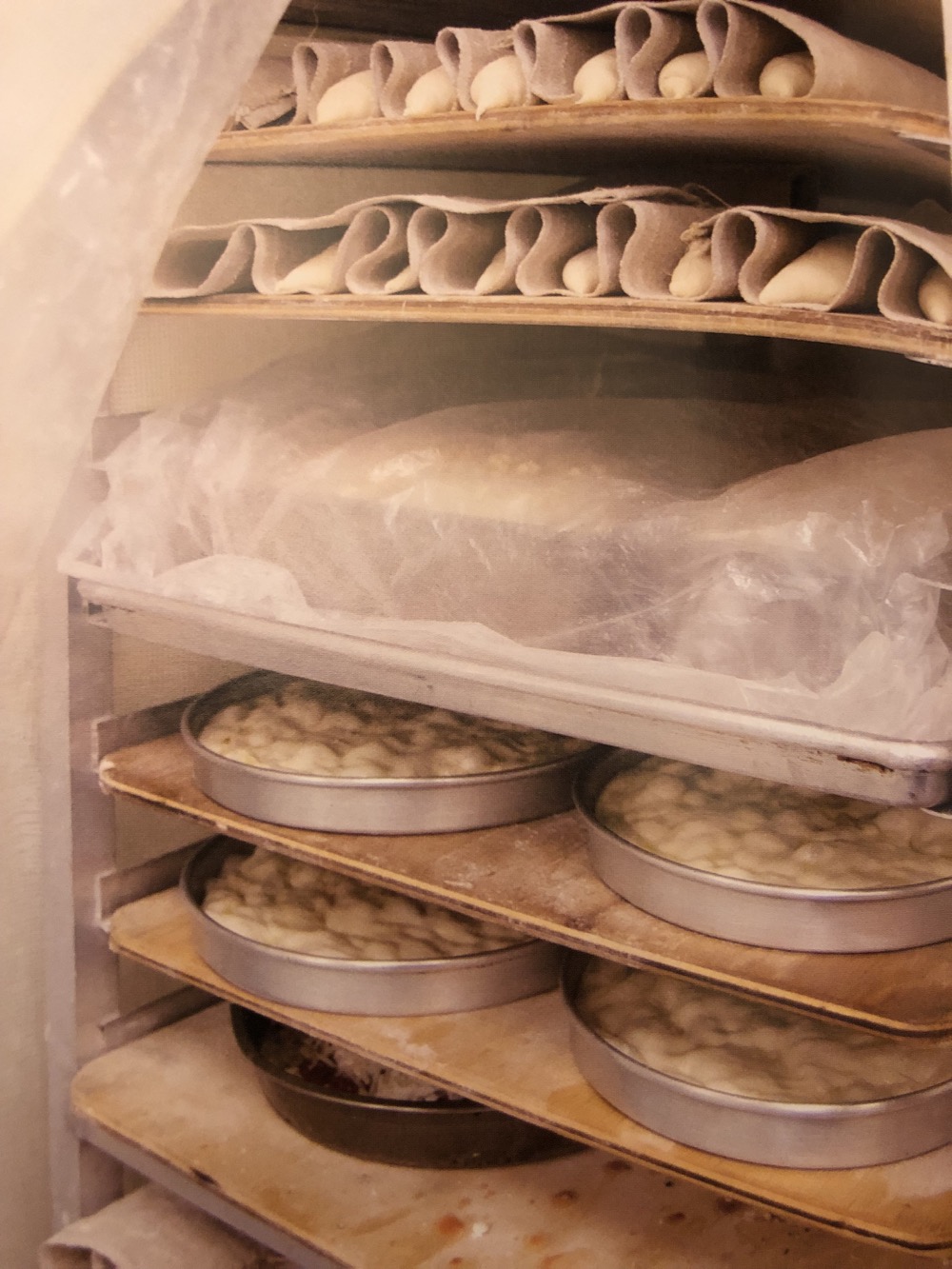 This? This right here is heaven to me, at SoNo Baking Company

The book gives feature billing to 46 restaurants. One is in Bridgeport: Bereket, one of the state’s best Turkish restaurants. (Casa Villa features too, which had a space in the city at the time of publication as well. It no longer does.)

I should note that I’m confident Amy doesn’t want to jettison Bridgeport to the moon, but that’s because she’s cool. As I’ve established.

One interesting tidbit for me came on the pages where pho restaurants are highlighted through shorter asides – two of which are in Bridgeport and one in Danbury called Pho Vietnam owned and operated by a guy named Tony Pham.

Pham had just opened his first Mecha Noodle Bar in Fairfield when the book was written, and Kundrat mentions what Pham’s vision for it was. She also mentions the KFC Bao which we get every single time we go/get take out at Mecha. In West Hartford. 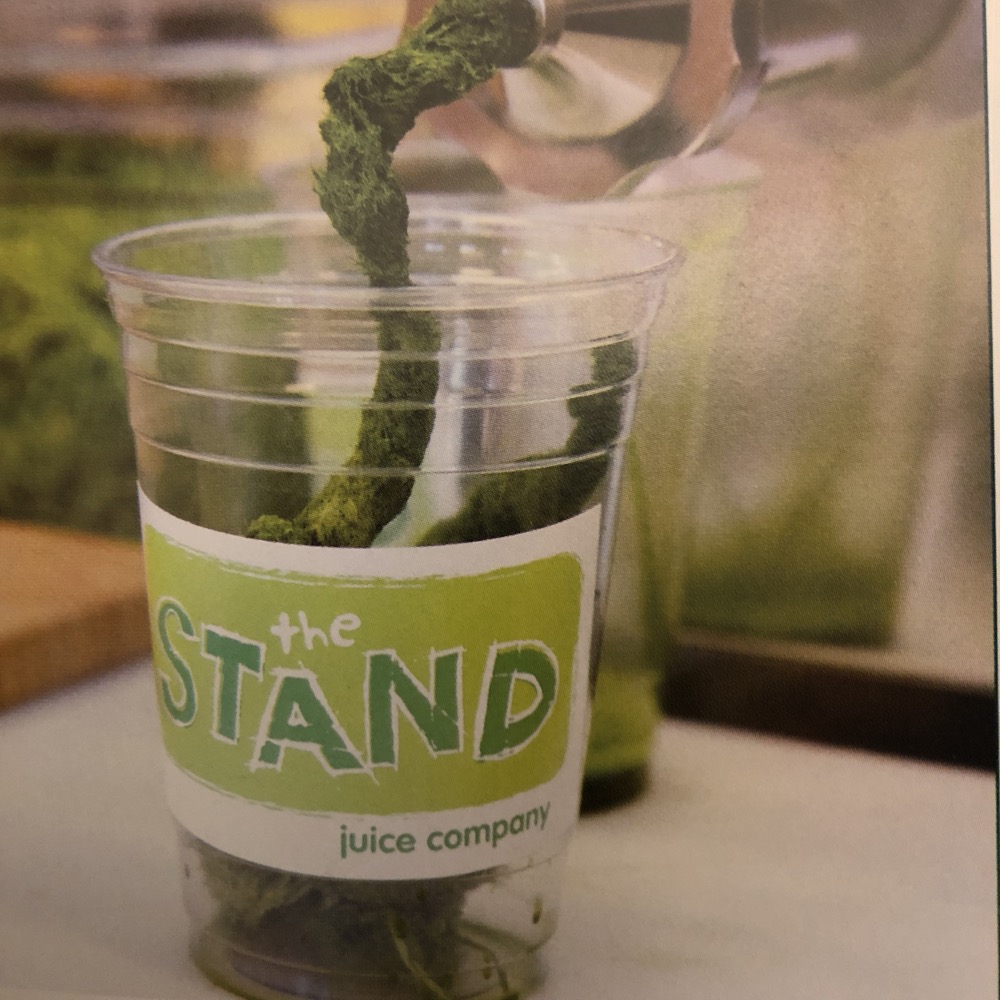 Um, perhaps not all of Webster’s photos are appetizing… at Catch a Healthy Habit in Fairfield

That’s right, Mecha Noodle Bar now has five locations all over Connecticut in 2022. Side note: Mecha is a play on the Vietnamese words for mom (Me) and dad (Cha) and it’s not pronounced anything like how you’ve been saying it. But that’s okay.

While Pham is a post publication success story, I was curious about the featured restaurants so I checked. The book was published in 2014 and I know it was a couple years in the making. How many of the 46 featured places do you think made it through 2021 and into 2022? We all have heard about the high failure rate of restaurants and how the COVID pandemic ratcheted that up. Only 12 have since closed, and three of them are still restaurants under different ownership. That’s not bad, actually, and shows that Amy has a good feel for what will last.

And to be fair, Westport’s duo of The Dressing Room and leFarm should never have closed, ever. There’s no point in pointing out the others, none of which I’d been to other than Community Table in Washington which closed… but reopened in 2018. I point that out because Hoang and I went there on Amy’s recommendation and because the chef came from Noma in Copenhagen. (Chef Viehland is now at Ore Hill & Swyft in Kent now if you’re curious.)

With recipes for the home cook from over fifty of the area’s most celebrated restaurants and showcasing over 200 full-color photos featuring mouth-watering dishes, famous chefs, and lots of local flavor, Fairfield County Chef’s Table is the ultimate gift and keepsake cookbook for both tourists and locals.

Fair enough. The two blurbs on the cover are from Michael Stern of Roadfood and Patricia Brooks who wrote Food Lovers’ Guide to Connecticut. I only mention this because I can link to stuff on my own site.

How’s that for “New Media” awesomeness? 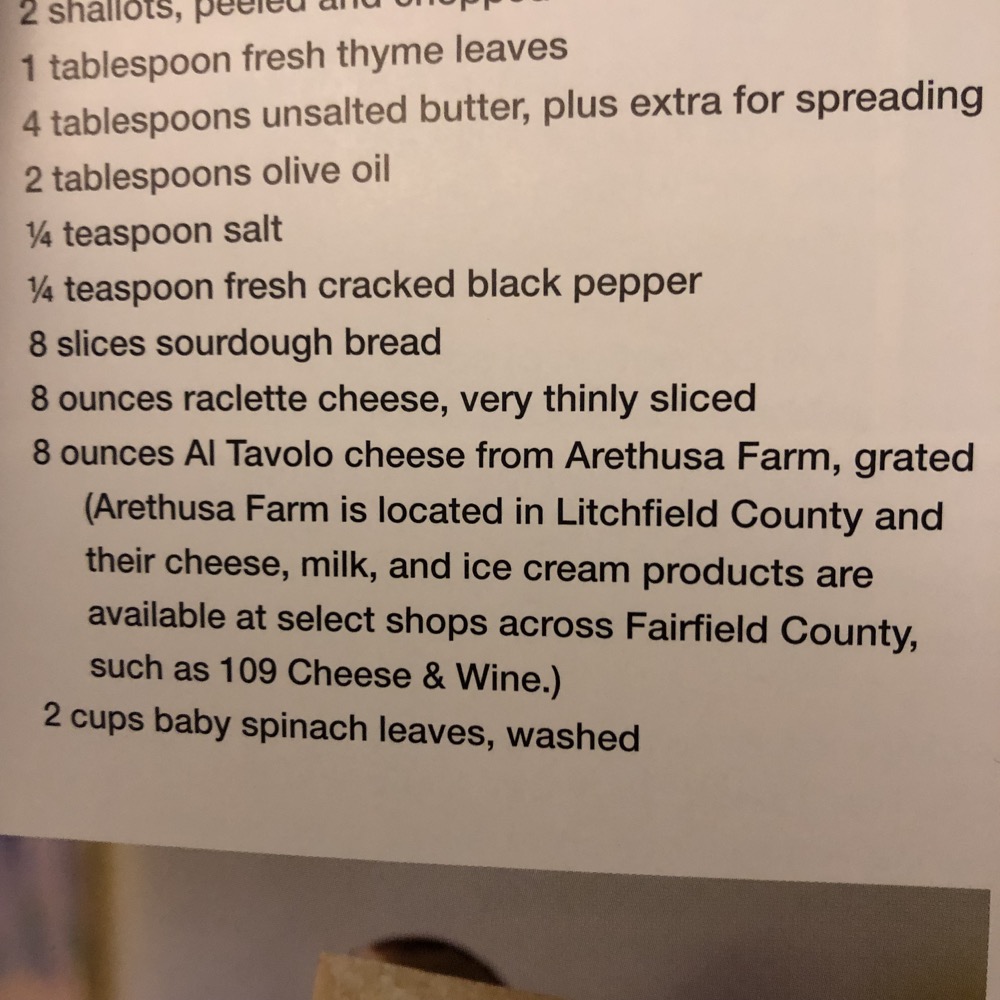 That’s right, suckers, that cheese is from Litchfield County! Slummin’ it.

I didn’t expect to actually read and absorb as much of this book as I did. As noted, Kundrat introduces each restaurant by providing background on the chef and owner as warranted. Each story is different. Retirement aged Italian grandmothers, fresh-faced young guns aiming to take down the establishment, high-end maestros and proud chefs bringing the flavors of their homeland to Fairfield County.

Or at least the flavors of their mentors. One example is Chef Michael Young, the chef and co-owner of Valencia Luncheria who brought “Venezuelan beach food” to Norwalk in 2008 and the restaurant has been a favorite of many ever since. If you want arepas in Connecticut, this is where you go.

And this is where we went to have dinner with the Kundrats (among others) in 2013. 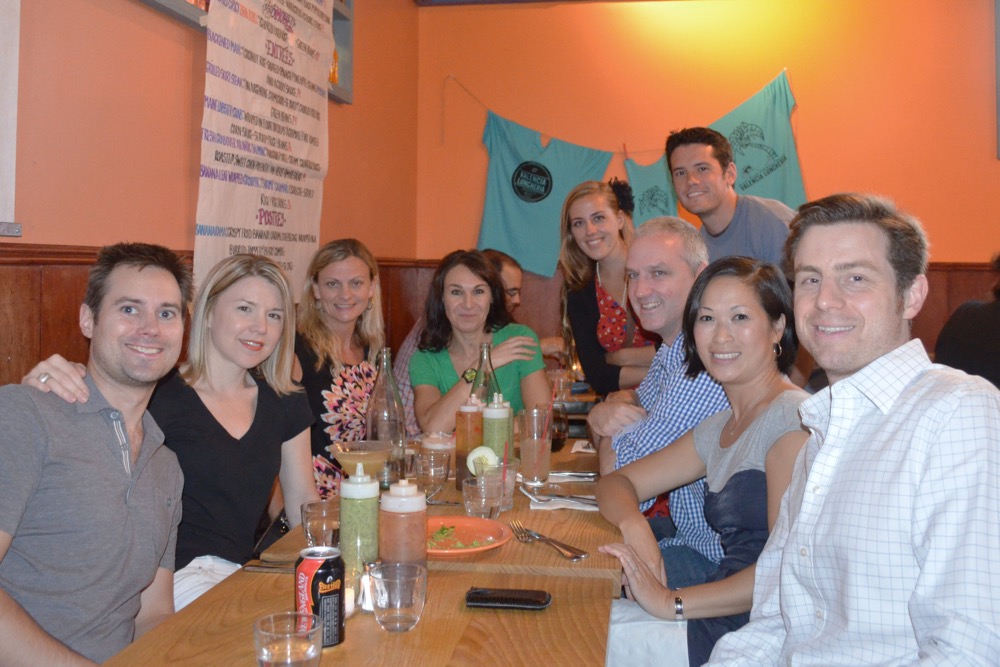 That’s Amy and Ryan front left and you see me hiding back there behind Hoang in the blue-checked shirt. I don’t know how Ryan and I convinced these women to marry us.

The book focuses a little more on higher end restaurants like New Canaan’s elm, Greenwich’s L’Escale and Bernard’s in Ridgefield – where my family happened to celebrate my 300th Connecticut Museum. But – and credit to Amy here – there are plenty of taco joints, diners, and burger places featured as well.

The full title of the book is Fairfield County Chef’s Table: Featuring Extraordinary Recipes from Connecticut’s Gold Coast and I can assure you that’s the wordiest part of the book. Kundrat writes in an accessible, yet erudite and descriptive way that makes me jealous.

The only thing missing? New Haven pizza. Because that’s in New Haven county. And even though the Kundrats live in Fairfield County, Amy works at Yale. But she can’t possibly know enough about the New Haven food scene to appear in a documentary about New Haven apizza, so I don’t even know why I’m writing this paragraph, and – 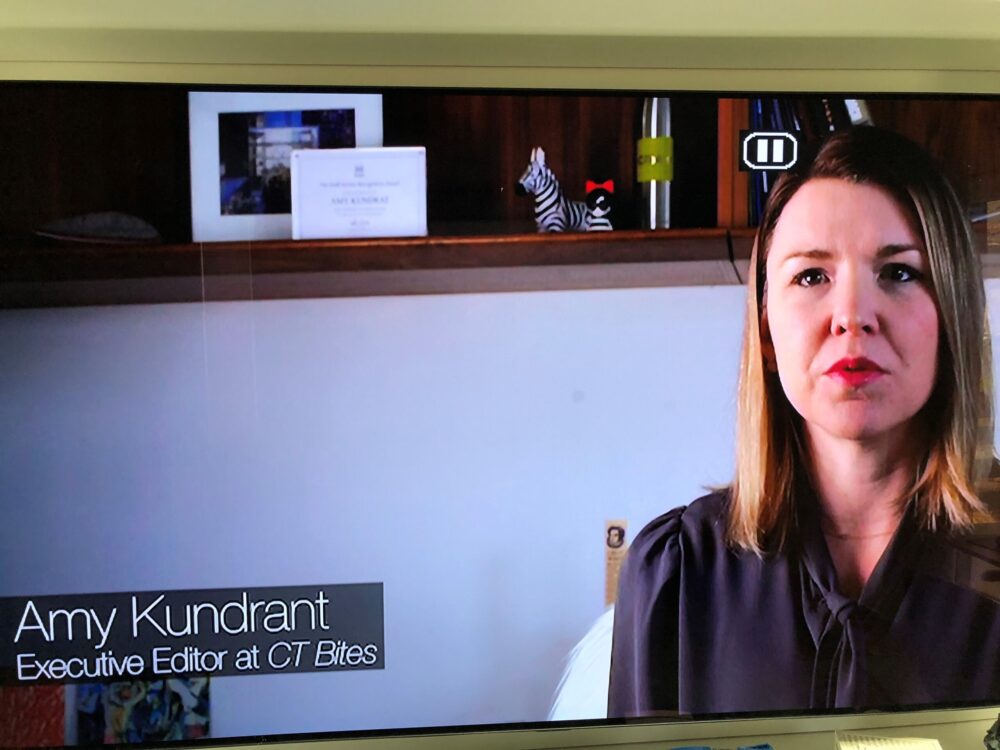 You see? That’s Amy Kundrant, someone else entirely

That somewhat unflattering picture (sorry Amy!) is a screen shot from Pizza, a Love Story which yes, is a feature length documentary about New Haven’s world famous pies.

I was very impressed with this book. There is a whole series of books cut from the same cloth for cities and areas all over the country. But I’ll go on record as saying that this is the best one. And I’m also sure that none of the other ones were written by a Ducati riding Yale mom with a keen eye from mid-century treasures whose house I’ve been to. So there. 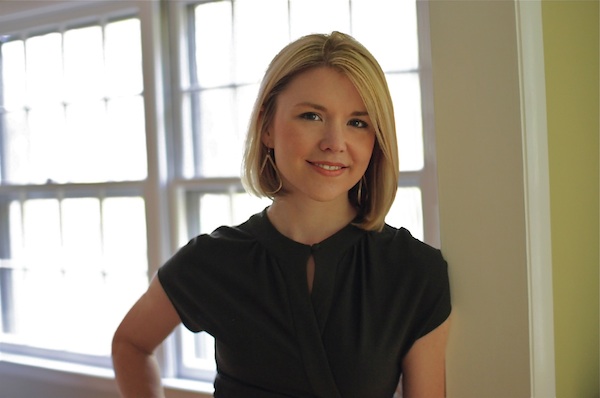