Please understand that everything below is a singular review, written by me. And by me, I mean the weirdo who has been compiling and writing about the most comprehensive “passport and guide to exploring Connecticut” for 14 years. 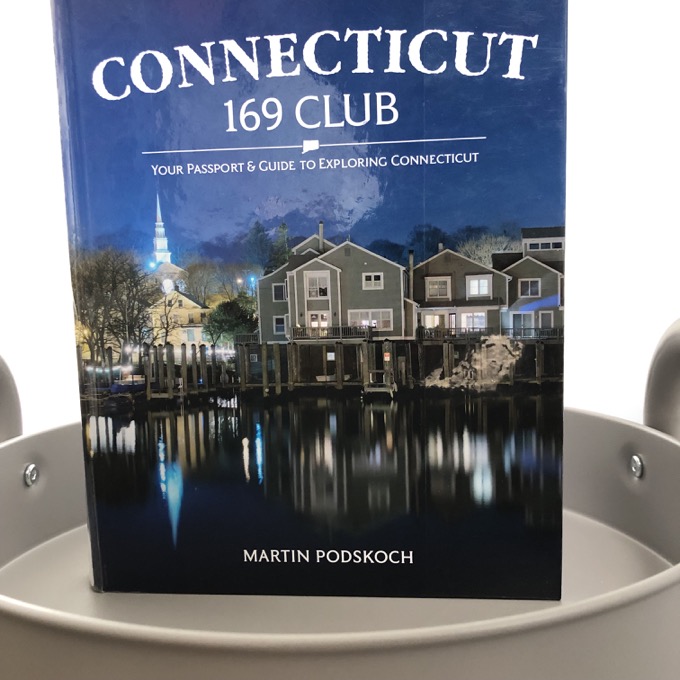 Creating what Podskoch has created is impressive and I applaud him for doing so. He was greatly limited, of course, by the constrained book format so it would be absurd for me to complain about all that is missing. And even if I were to do so, it’s not like it would be Podskoch’s fault.

For Podskoch, bless him, didn’t actually write 95% of this book. Nope. These 183 other people did: 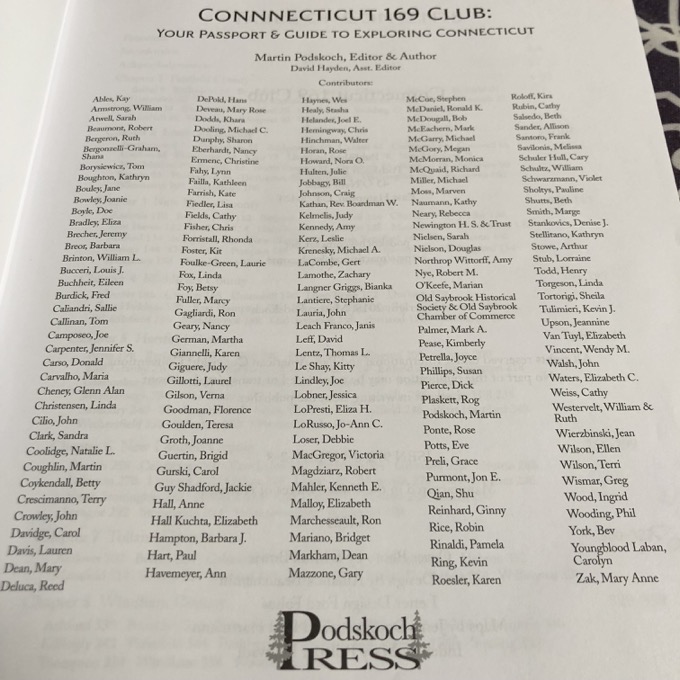 Neat trick, eh? I know a few of these folks and know that several follow me on social media. I know a few other folks who were approached by Podskoch (or a proxy) to contribute to this book – which, as I understand it, was a volunteer effort. (I could be wrong.)

And my man Jerry Dougherty provided most of the pictures in the book – a true pre-169 Club pioneer. Walter Woodward was on board as well, so right there are two guys I look up to when it comes to “everything Connecticut.”

Corralling 183 people to contribute cohesively for a book is no easy task. There was a relatively huge local media push when the book was published and Podskoch did a book tour and everything. Articles appeared in several newspapers and he’s created a whole thing called the “Connecticut 169 Club.”

A list of all 169 towns appears at the end of the book with check boxes. You, intrepid local traveler, are to check off each town you visit. I think the idea also includes (included?) a place in each town to receive a stamp or signature for your efforts. You are also invited to an annual dinner to celebrate the hardy souls who are able to check off all 169 boxes at which point they can receive Podskoch’s “Leatherman Award!” It’s a patch. It’s all very exciting.

I actually don’t know if the pandemic of 2020 would have increased patch recipients or decreased them. I’d guess the latter, but people were itching for stuff to do, so maybe I’m wrong.

Before we get into some of the details, I should make clear that Martin Podskoch has written books previously and is fully capable of writing them himself. Prior to the 169 Club, he’d written books about the fire towers of the Catskills and Adirondacks; how to access them, their history, and the stories as told to him by those who staffed the towers.

He’s written other books about the Adirondack region and wrote one about visiting towns, checking boxes, stamping stamps, and getting a patch or doing so. (Patches are a big thing in the peakbagging world and there are a whole bunch of peakbagging patches available in the Adirondacks – so the whole idea comes from that world. A world which I love.) 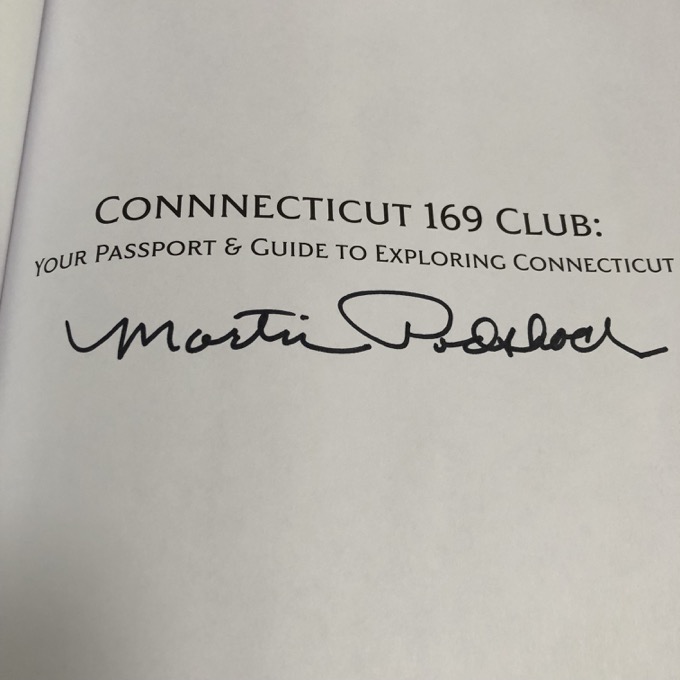 He’s retired from teaching in New York and lives in East Hampton, CT now. Which brings us to the book at hand… Podskoch compiled, edited, and promoted it. And good for him! I’m way too lazy to do anything similar. I approached the book as you’d expect – like the 169 Snob I am:

“No way is this book going to tell me anything I didn’t already know. What a lark.”

Well, I’m happy to report that I was wrong and there are a handful of places and things that are mentioned in the book that I added to my CTMQ lists. Tiny things, sure, but that’s fine. And really, for a novice Nutmegger, this book is a fun way to explore Connecticut. It’s just very limited in scope as compared to this website – which only makes sense.

Podskoch is no slouch when it comes to local travel. He wrote another book about our state’s old CCC camps and in doing so, criss-crossed the state. He read about the Vermont 251 Club and apparently liked the (also apparently) untrademarked idea enough to create the same thing in the Adirondacks and then for Connecticut.

Each town gets up to two pages of text to show itself off. This puts behemoths like New Haven and Hartford on equal footing with the Voluntowns and Hartlands of the world – something I try to do as well. Greenwich isn’t put on a pedestal above Union and I like that.

Let’s check out some entries… 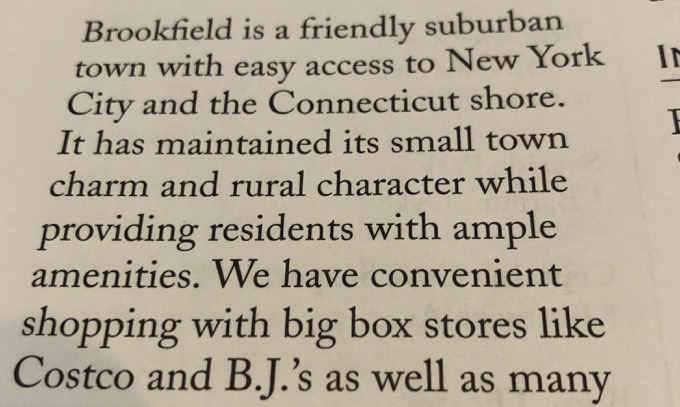 Hm. Okay. A few things: No one of sound mind would consider the Brookfield to New York City commute “easy” and why did this writer highlight its “big box stores?!” Brookfield is beautiful! I thought the idea here is to incite travelers to visit these towns, not run away from them! C’mon, Podskoch!

The next town in the book (the order is regional) is Canaan. Or should I say… “Cannan?” 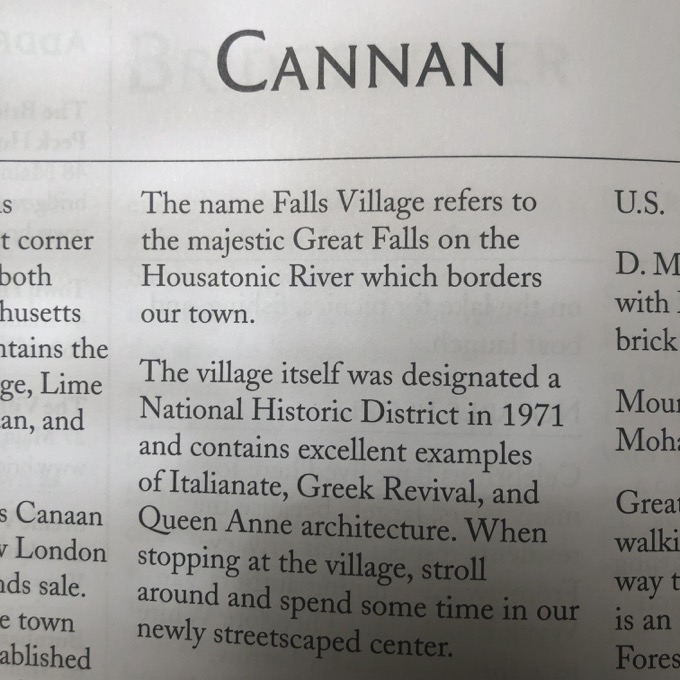 We were off to an inauspicious start. Let’s skip around a bit… remember how I said the book levels the playing field between New Haven and our other cities and towns? 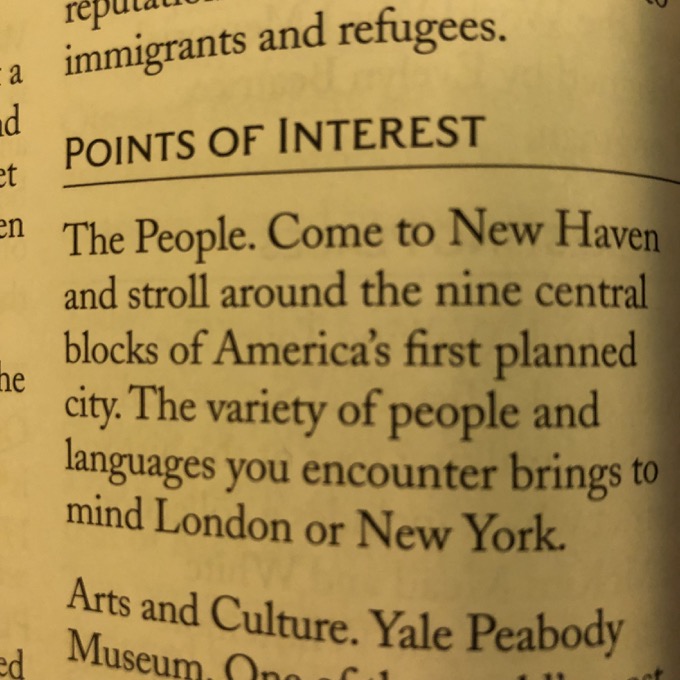 Whoa! I love New Haven, but… no. Nothing about it reminds me of London or New York, two cities I’ve spent extensive time in for work over the years. That is just a bonkers comparison. Truly bonkers.

Props to the Southbury contributor for noting Southbury’s unique stance in 1937 as the only town in America to block a Nazi camp.

Some bits I learned: Lewis Waterman invented the fountain pen in New York in 1884 and had the Day Rubber Pen Company of Seymour to manufacture it. Campbell Avenue in West Haven is named for a British Soldier killed on American soil. This is not a common thing. The 1958 movie “It Happened to Jane,” starring Jack Lemmon and Doris Day was filmed in Chester. The Saglio Brothers in Glastonbury formed Arbor Acres, one of the first producers of genetically engineered chickens – and by 1958, 50% of all the chickens eaten in the world were from Arbor Acres. (Really?!)

Another bit I never knew because it’s just not true: 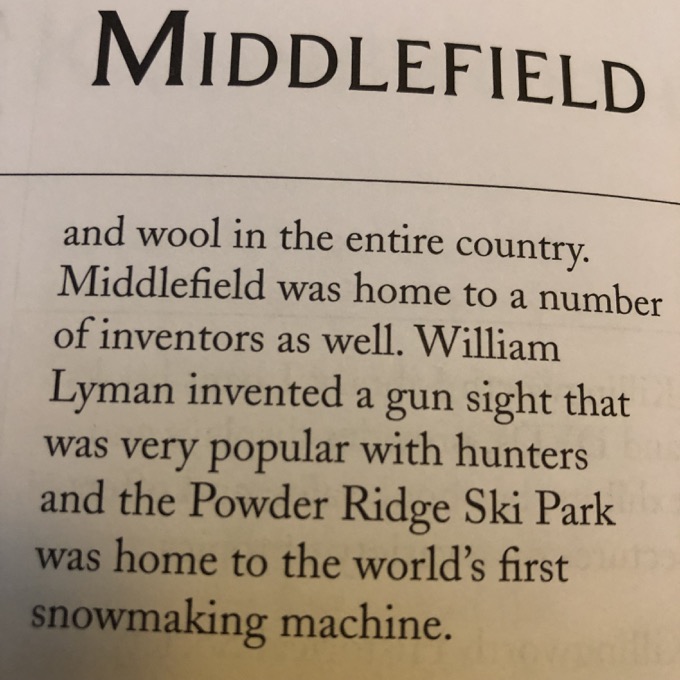 Okay, maybe it’s true? Like, maybe it was invented there but used first at Mohawk Mountain in Cornwall because that’s the place the world knows as the first ski hill with artificial snow?

I found the following particularly galling… West Hartford is my hometown and there’s plenty to highlight here. So why in the world did my town’s writer use up valuable column space on The Governor’s Mansion, which is in Hartford? 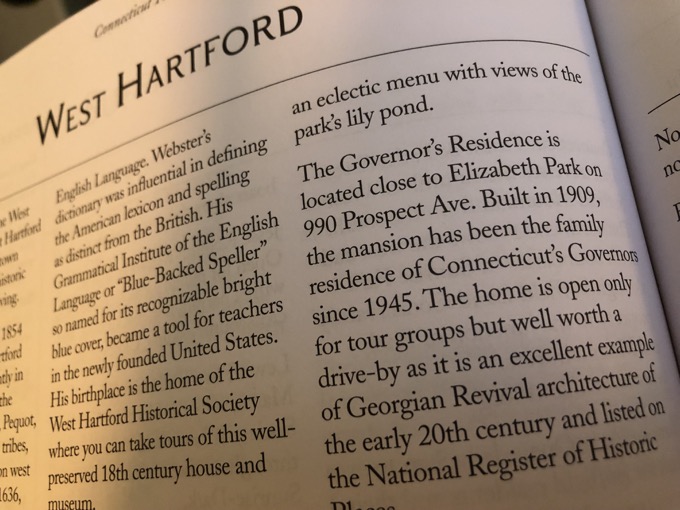 Also near my home is the incessant battle between Windsor and Wethersfield as to which is the oldest town in Connecticut. This plays out in the pages of The 169 Club in a sort of passive-aggressive way. Here’s Wethersfield, “Connecticut’s most ancient town:” 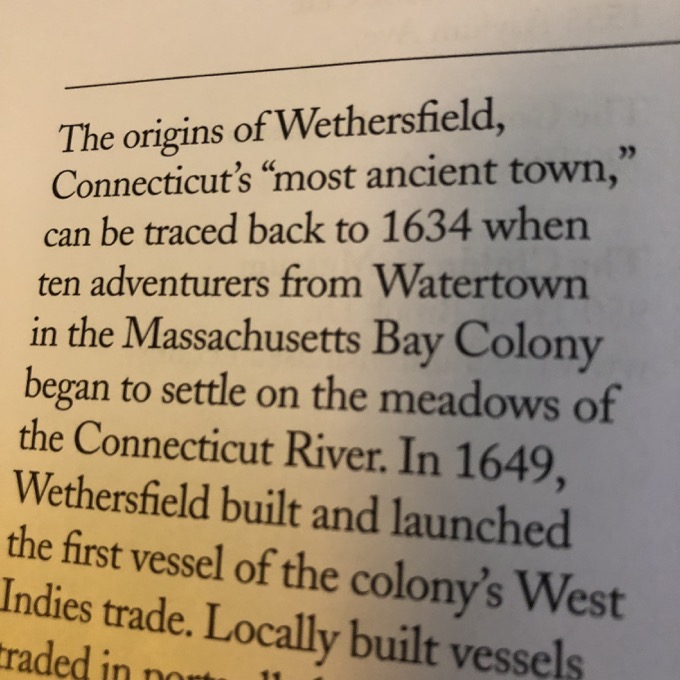 Followed right after by Windsor, “Connecticut’s oldest English settlement.” These towns will never stop, will they? 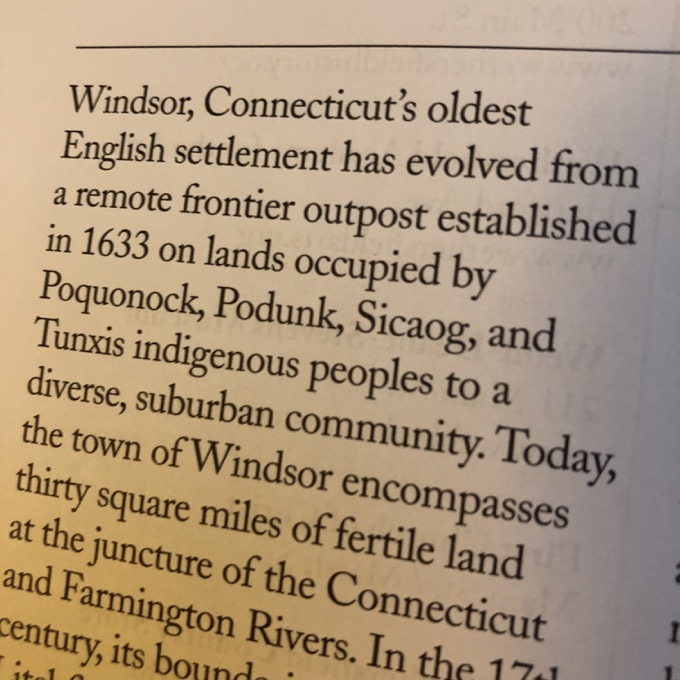 I think they call that shade. Or, as they say in Olde English, “Shayde.” Speaking of shade, let’s talk Bozrah. A town which I’ve called my favorite Connecticut town simply because there’s nothing there meaning I can say whatever I want about it and no one will care because no one lives there and those that do, don’t have the internet.

But the Bozrah entry included something I didn’t know! Check it out: 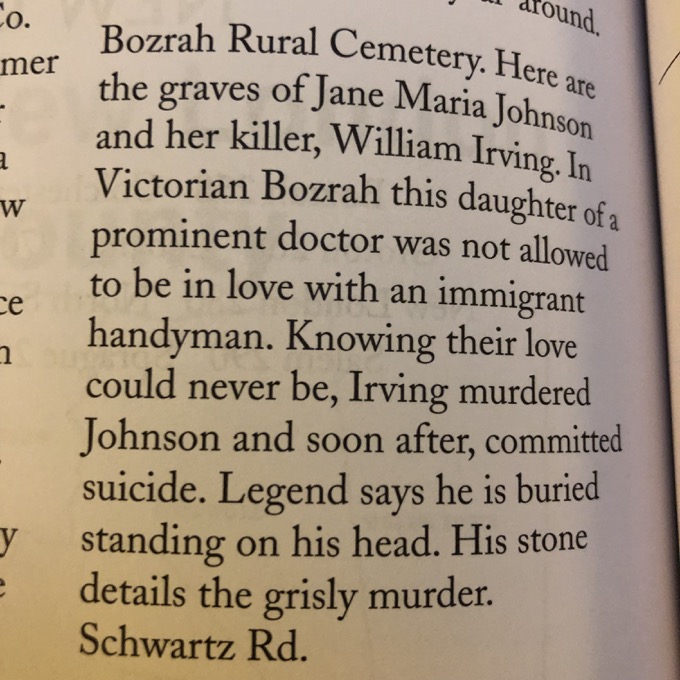 Yes friends, a highlight of Bozrah is a murderer’s gravesite. I’ll never not love Bozrah. Right next door to Bozrah is Salem. The Salem entry taught me something I didn’t know: Fairy Lake Farm was the first electrified farm in the United States! And in fact, Googling the guy who owned it, Frederick Rawolle, led me down a most fascinating rabbit hole that I’ll write about someday.

Another interesting character that had never heard of is Elmore Bitgood from Voluntown. He was apparently one of the strongest men in the world and put on shows lifting cows and such. The Voluntown historical society, which doesn’t have a museum space, does own stone barbells that Bitgood made for himself.

Okay, that’s not super exciting, but this is Voluntown and I’ll take it. But you know what I won’t take, Voluntown? This nonsense: 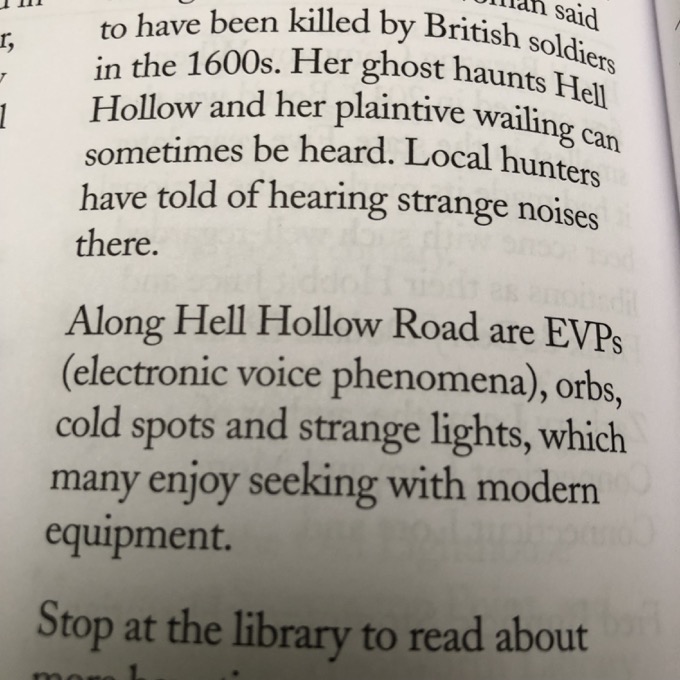 Get out of here with that. You’re telling me you are literally inviting the ghost hunting clowns to Hell Hollow with their phony machinery to chase something that doesn’t exist? For shame.

Here’s something we can enjoy a bit more… I personally can’t stand how the village of Versailles in Sprague is pronounced “Ver-sales” but I found the explanation! 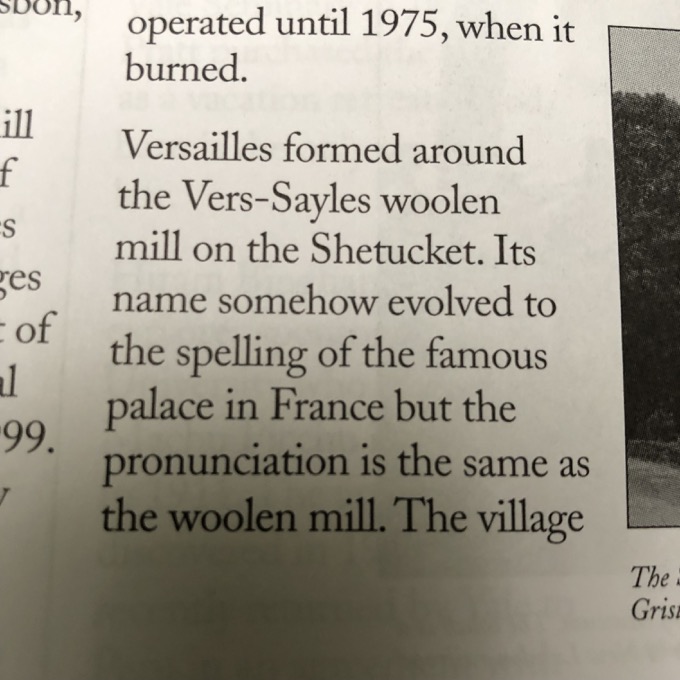 Moving on to Columbia, the listing for “amenities” includes 7-11, Dunkin Donuts, and… the Thunderbird Cafe? There’s apparently a coffee shop serving breakfast and lunch inside a Ford/Kia dealership there. Is this a normal thing? I must investigate. Willington’s entry contained a surprise museum – the Gardiner Hall, Jr. Museum and schooled me on the Macinda Ocean Pearl Button Company which, since the book’s publication, has decided to also become a museum. It’s clear I haven’t been keeping up with the doings in Willington. Shame on me.

Thompson’s entry is full of excitement. Yes. Excitement! Up in the corner of the Quiet Corner! It mentions the Tourtellotte Memorial Room and how it is the “largest public school museum in the country.” I questioned that claim when I visited, I questioned it when I wrote about it, and I question it now. 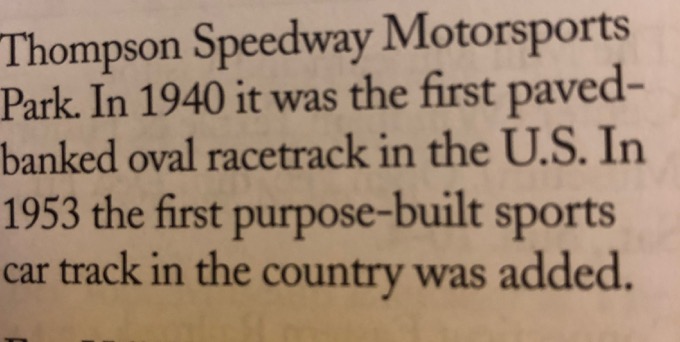 Excitement! I have no basis with which to confirm or deny these claims, but I have spoken with the owner of the track and he’s opening a brewery near me in 2020 or 2021 so I’ll have a chat someday.

There were other tidbits here and there that I used to add to my lists. From a random trail here to a fancy pile of old quarry scraps there. I thought that I would quickly skim the book, see that there was nothing for me to gain from reading it, and call it a day.

I’m happy to report that that wasn’t the case and several town entries were written by people who are very passionate about where they live. I’m a bit curious as to how many people bought this book and have been popping around the towns to get their stamps and/or signatures to become members of the 169 Club and getting their Leatherman Patches.

It’s a neat idea, and I’m all for old school pen and paper over apps, but I think it may be a bit optimistic. But you all should prove me wrong! Go for it! 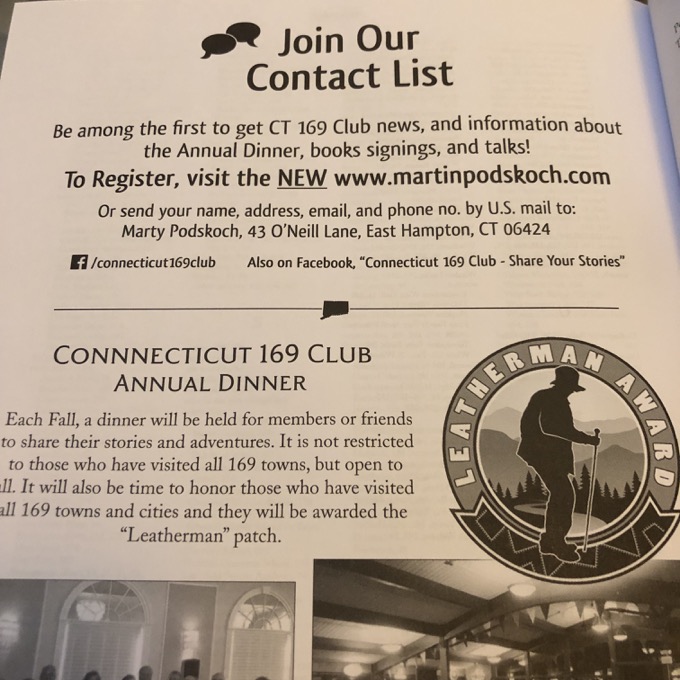