When I begin a new longer-distance trail, I often think about the people who rush to rip through certain hiking challenges. Surely there are Blue Trails Challenge hikers who try to get through the CFPA’s nearly 1,000 miles of trails in just a year. And hats off to them. 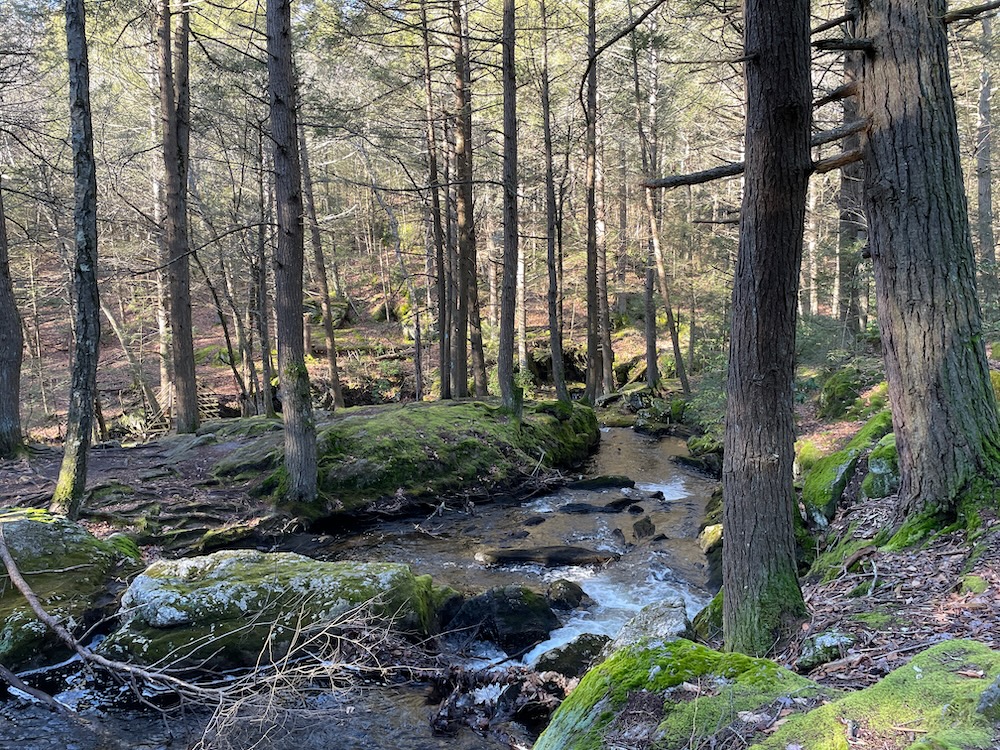 As for me, I enjoy taking my time. I like the serenity and – just kidding. I just have too much other stuff to do, both in life and for this website. I love completing lists more than anything! I wish I’d begun the Mattatuck Trail years ago! Alas, here we are in the surprisingly beautiful Peterson Park in Wolcott, beginning the 42-mile trek west and north, ultimately ending at the Mohawk Trail in Cornwall.

Peterson Park is a gem. Beyond all the usual town park stuff, there’s also a skate park right next to the trailhead for the Mattatuck. I was joined for my hike by my longtime friend Kevin, a.k.a. KO. As a nearby Cheshire resident, KO was a Peterson Park veteran and is familiar with every nook and cranny of the place. 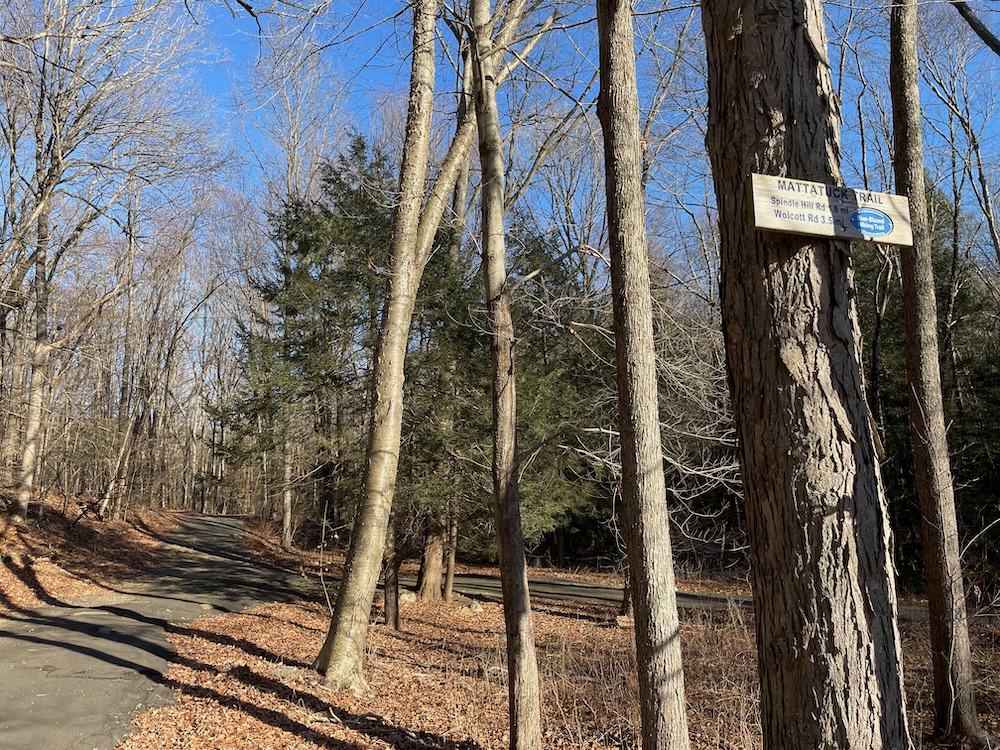 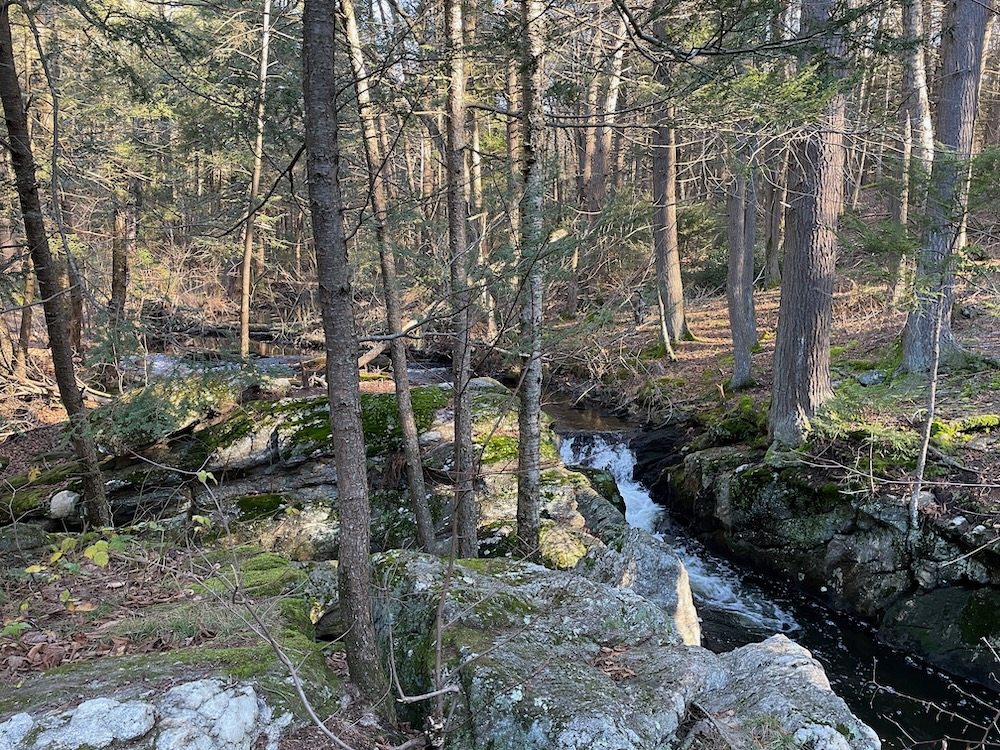 I’d actually visited the park before once myself, as there is a beautiful series of cascades along the Mad River here that I checked out for CTMQ purposes. It was fun to hike past them again nearly 18 months later. Still beautiful.

As we crossed the “Hobbit Bridge” as I deemed it, KO told me he randomly met the guy who built it while walking around here once. I expected some cool story but no, Kev just deadpanned, “He said he was bored and just felt like making it.” Well, shout out to that guy I guess. 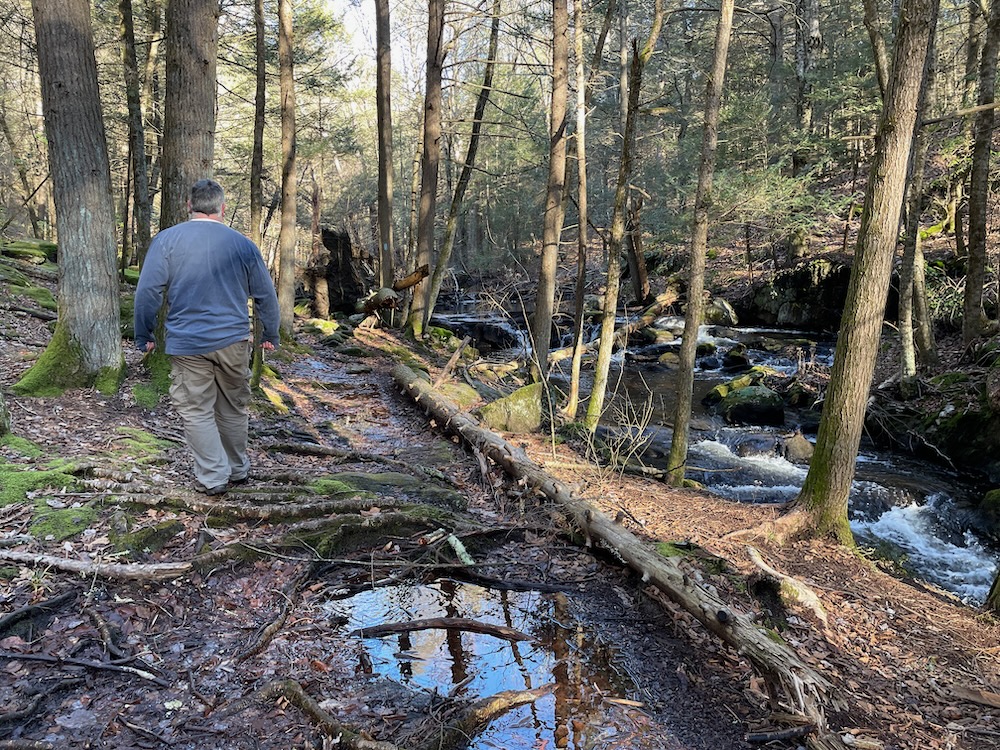 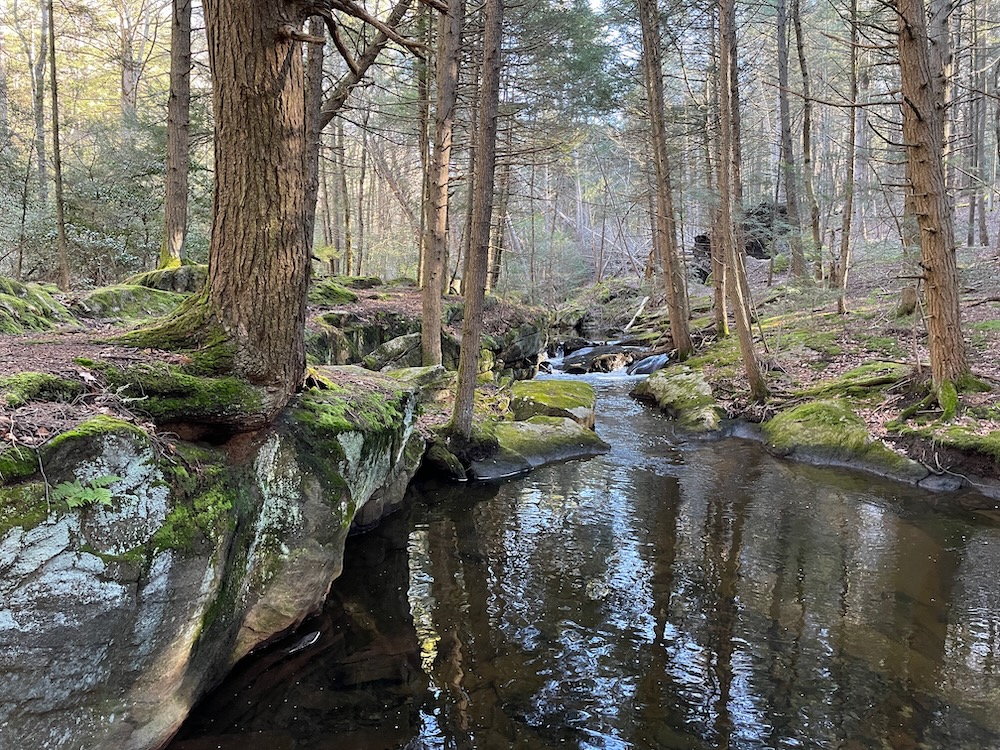 Just past the cascades, we crossed into new-to-me woods. Majestic pines and hemlock frame the Mad River in scenes right out of postcards. Yes, this is Wolcott. Kev showed me a deep pool that is a popular swimming hole in the summer. The water looked clear and clean and the little chasms along the way would certainly provide some shade and secret hidey holes if necessary.

After some large boulders and the remains of an old dam, the trail leaves the Mad River and heads west towards Plymouth after a while. The forest changes over to northern hardwood and we walked through some wet open areas for a bit. There’s an old powerline/road section that is also a creek. Which is weird. I will say that the trail does an incredible job avoiding some of the ugliness that surrounds it here in western Wolcott. It passes very near an open sand pit (I’m guessing) and a truck and bus junkyard. Even in winter we couldn’t really see much of these places on either side of us.

More amazing is that the little brook we crossed was as clear as an Alaskan stream. Crystal clear water. Almost disturbingly clear for this part of the world. This picture is dumb, as it’s not really giving you the idea that it’s part of a stream, but the idea here is that it’s super clear water: 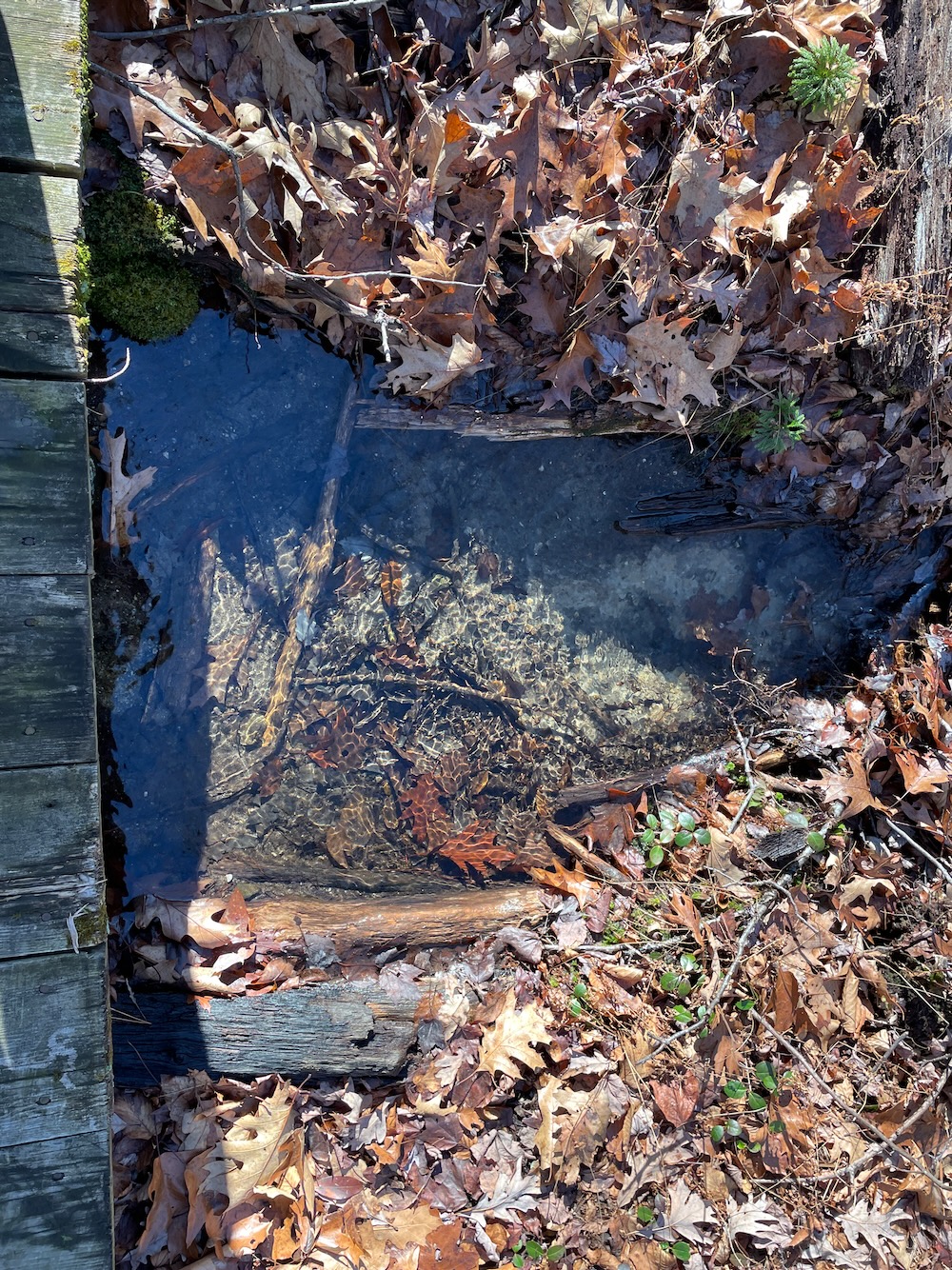 As we crested a hill and looked down at Spindle Hill Road, Kevin told me that he was about to cross into unchartered territory for him. This was his turnaround point on his frequent walks around here. Deep breath, buddy, let’s go. 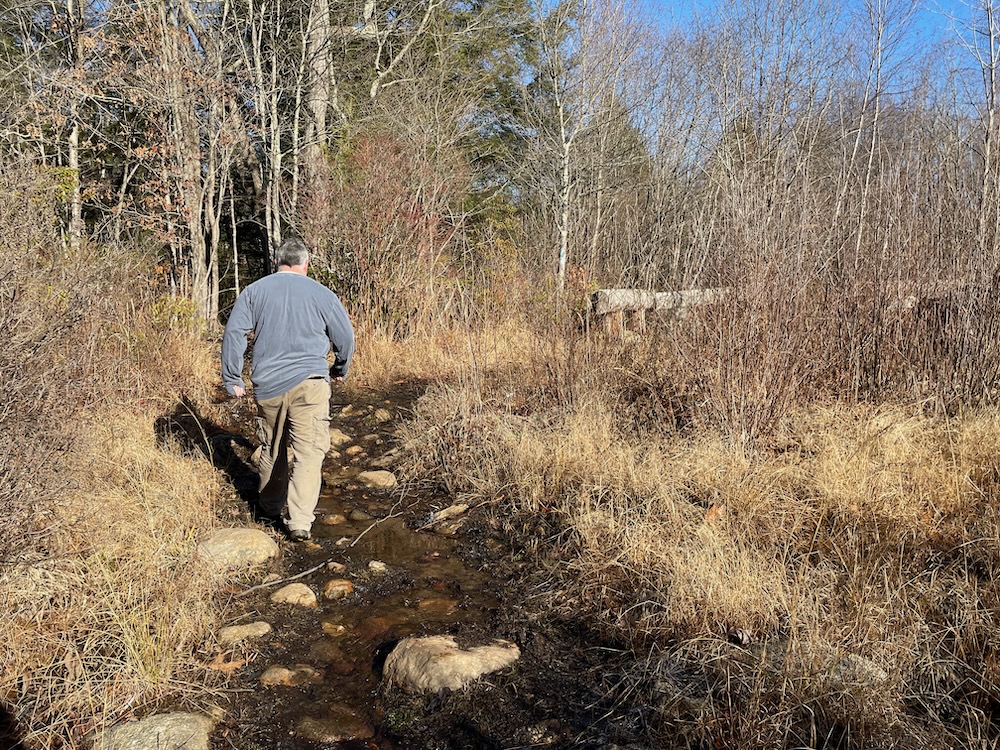 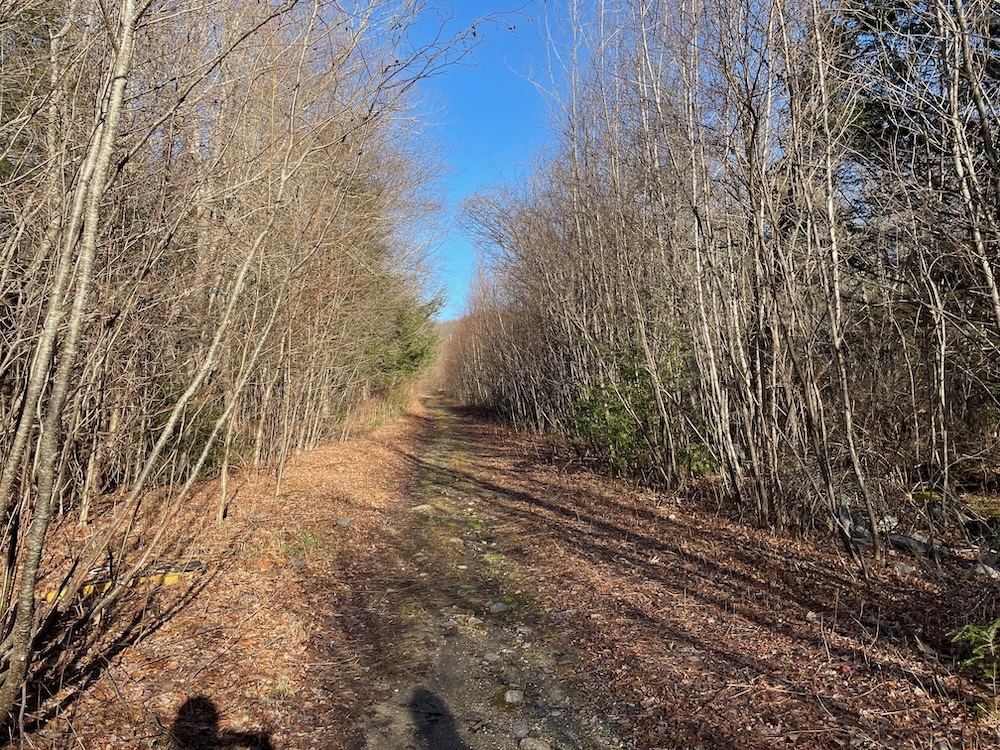 Especially since I knew there was some really cool stuff coming up. We crossed Spindle Hill Road and made our way up and down some small hills through the woods into Plymouth and therefore Litchfield County. Plymouth is one of those towns that gets lost in Nutmeggers’ collective conscious for whatever reason.

But here’s the thing. The Mattatuck Trail in Plymouth will take you to some really, really cool stuff. Certainly one of the state’s best waterfalls as well as a cool cave-like Connecticut “cave”. 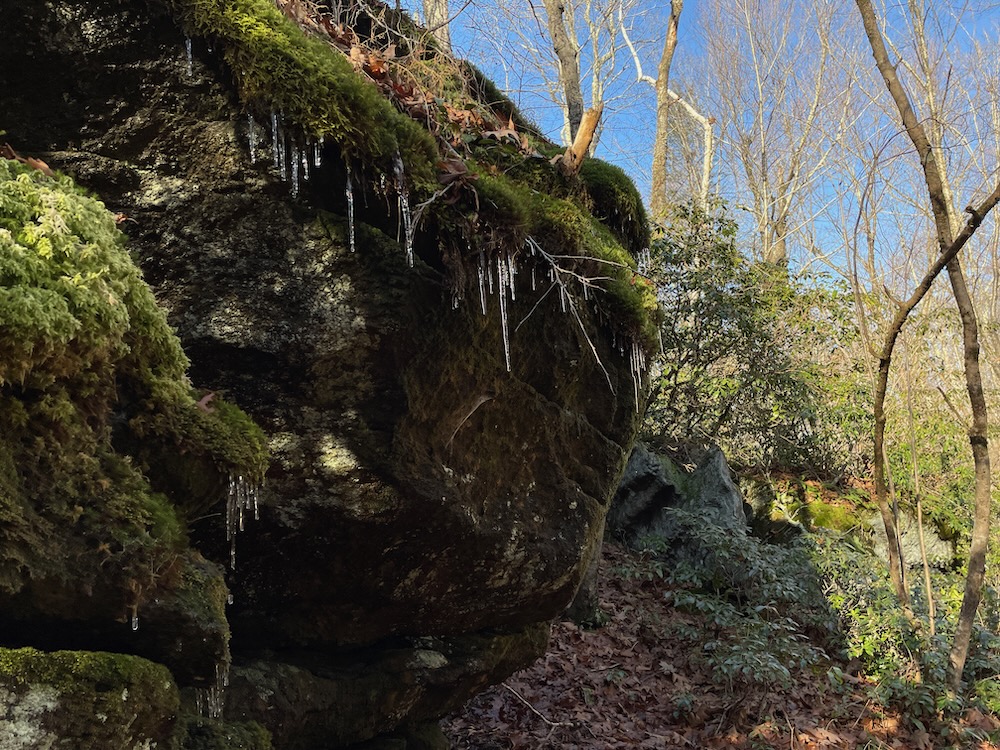 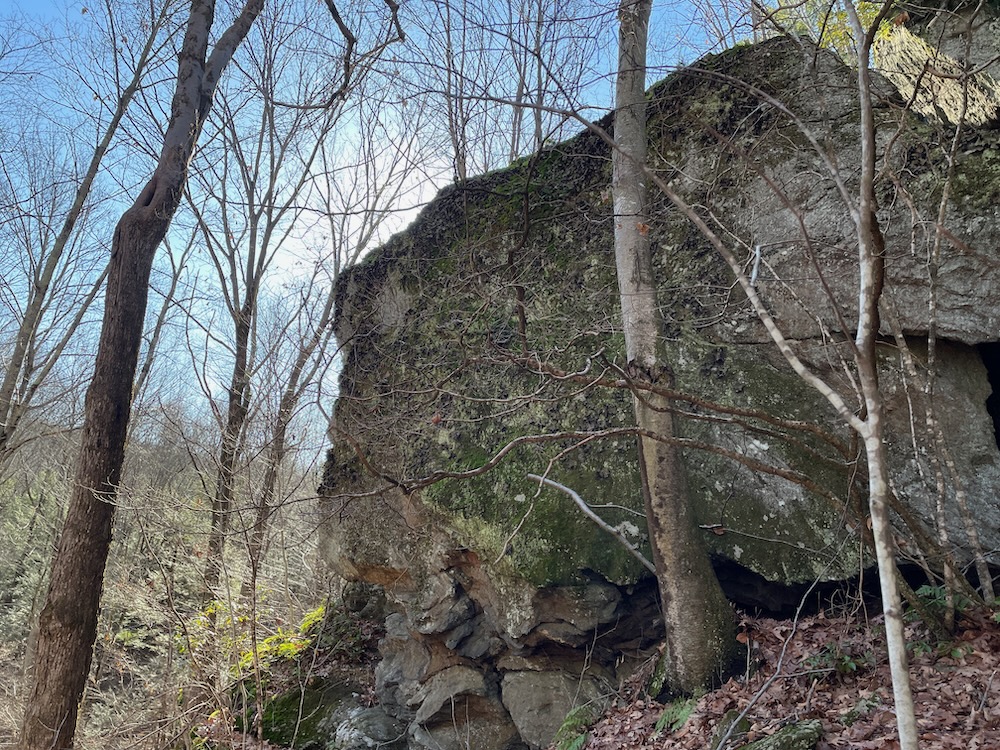 I had noted that we’d be passing near Charlie Krug and Indian Jack Caves just across the town line. (Note that in the middle of the woods, it’s pretty rare when you know you’ve crossed a town border, but sometimes a town/county border will have a little stone marker of some sort.) I was getting excited for these caves.

Then we passed Charlie Krug Cave, right alongside the trail. This rock feature is so not a cave that I wasn’t sure it was the supposed cave. Look, we all know Connecticut doesn’t have real caves, but naming this thing a cave does everyone a disservice, especially ol’ Charlie Krug whoever he was. 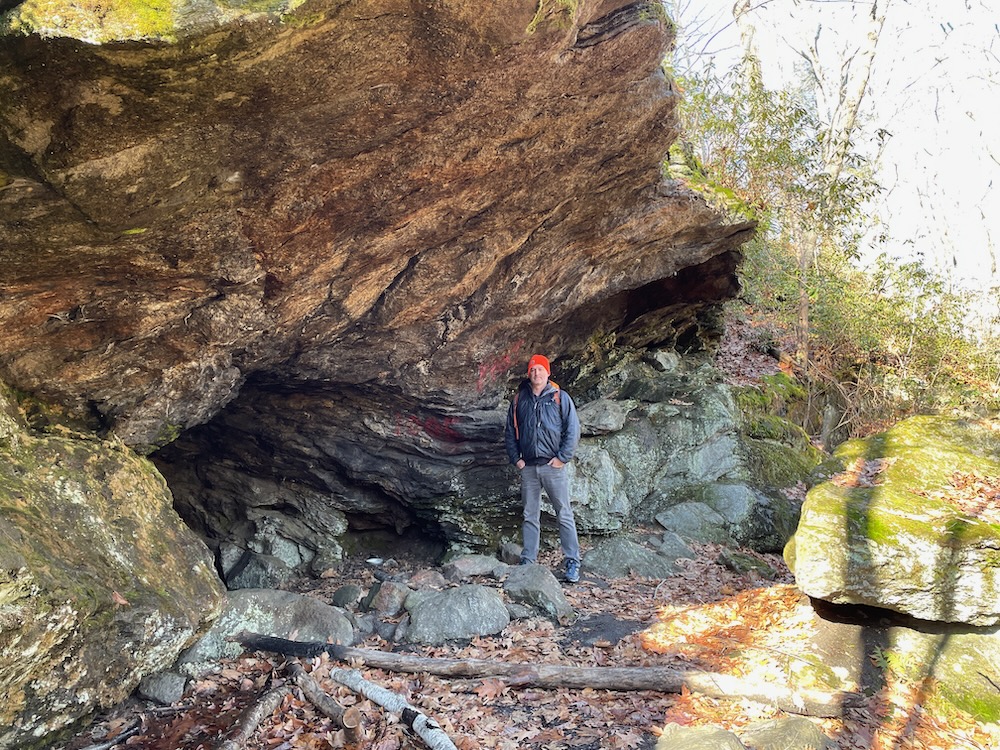 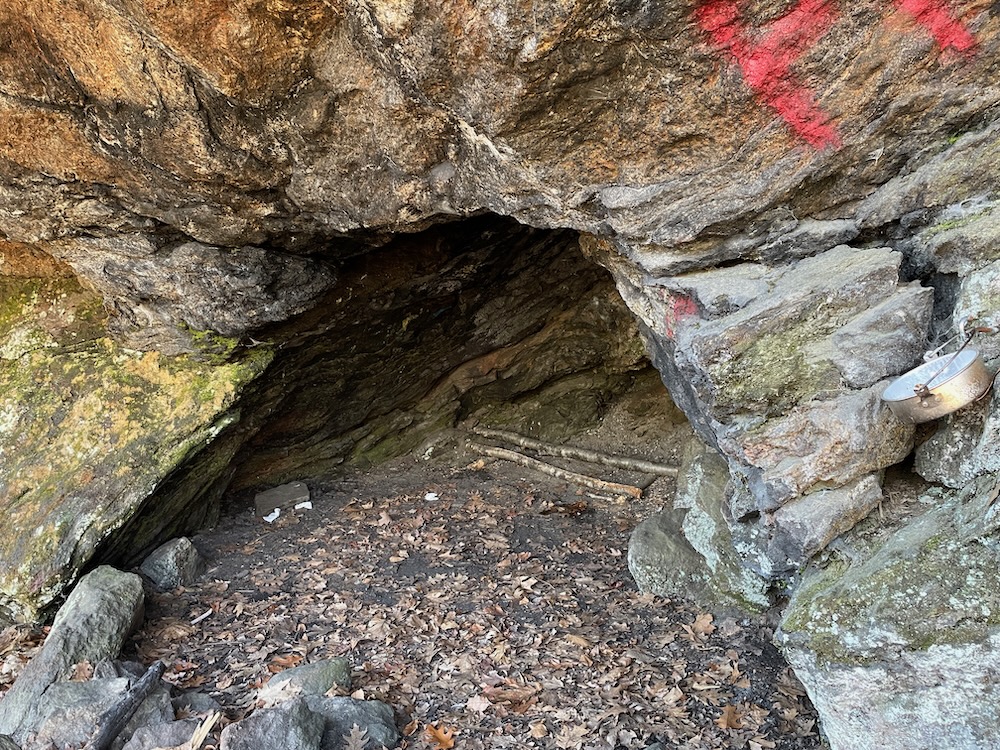 But then, after we made a few more turns through a laurel forest, we saw it: a massive rock wall up on a hill and what was surely Indian Jack Cave. Nice.

KO and I scurried up the blue-blazed path towards the gaping opening, giddy with excitement. (Okay, that was just me. Kev was thinking about putting this hike behind him at this point due to some knee pain.)

Indian Jack Cave is different from most fake Connecticut caves. First, it really looks like a cave from anywhere outside of it. Of course, once in it, you realize it’s just a rocky overhang like all the rest, but it’s a pretty darn deep rocky overhang with a nice flat bottom. Locals have fashioned a cooking fire ring here and installed a few kitchen implements. 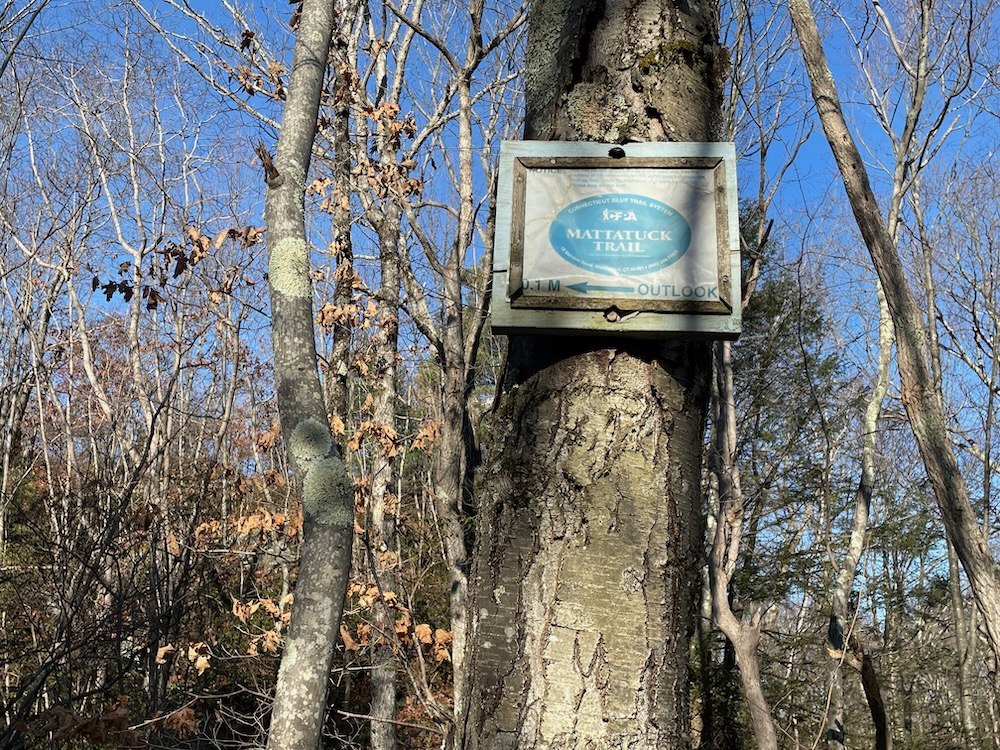 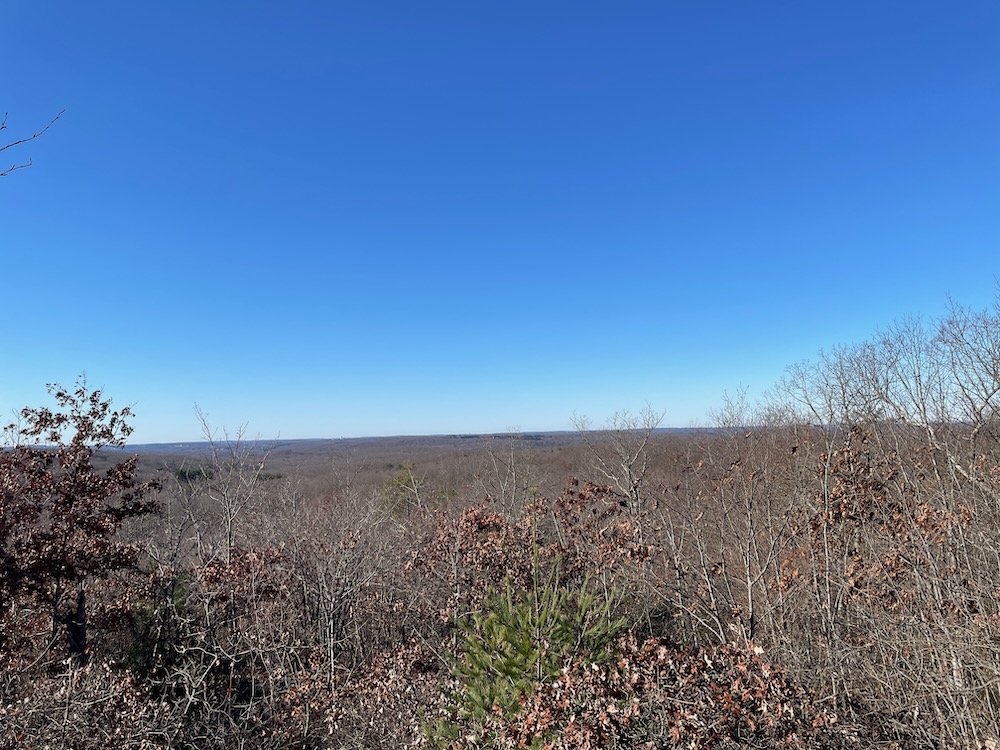 Just to the west of Indian Jack, there’s another huge rock cliff with some neat non-cave features to explore. Since we were two old guys, we skipped the danger and went up a spur trail to a take in a western view across to Black Rock State Park and beyond. I’m sure it’s quite stunning during peak fall foliage. In December? Eh, it was still pretty nice.

As we made our way further west, I kept thinking about something Kevin had told me on our drive to the starting point. We had passed a beaver pond and he nonchalantly mentioned that the pond is trailed and that it was another place he liked to hike. I didn’t want to let on that I was privately freaking out about this. I wasn’t sure if the pond was in Wolcott or Plymouth (Plymouth, as it turns out) and if it was in Wolcott, then my confidence that this was the last bit of trail for me to walk – ever – in that town would be incorrect. 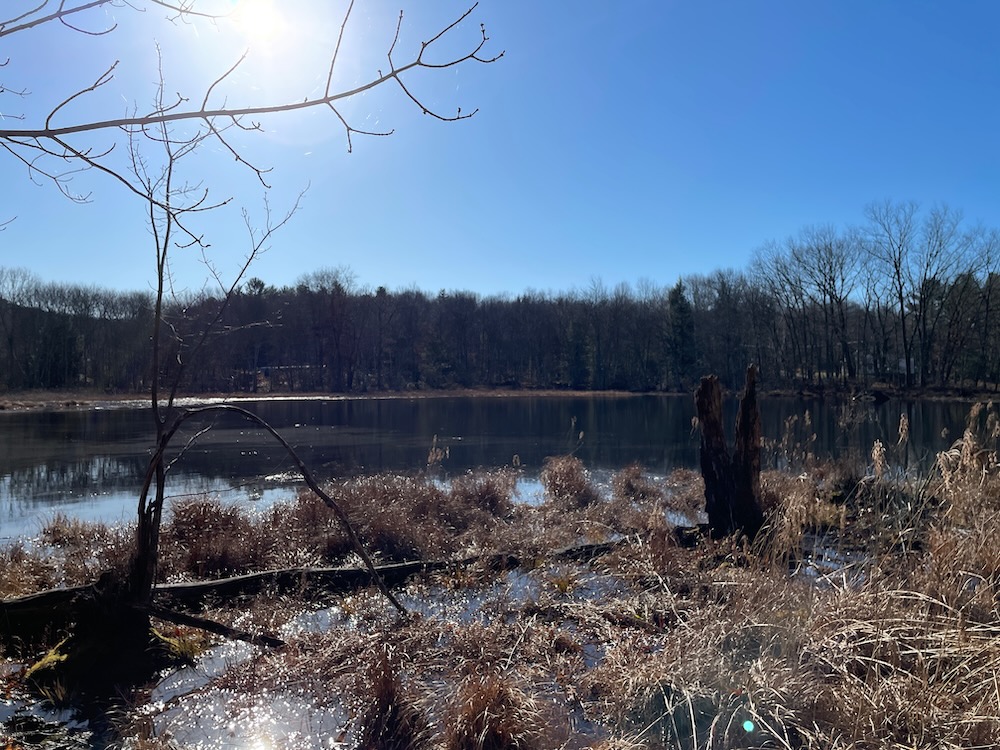 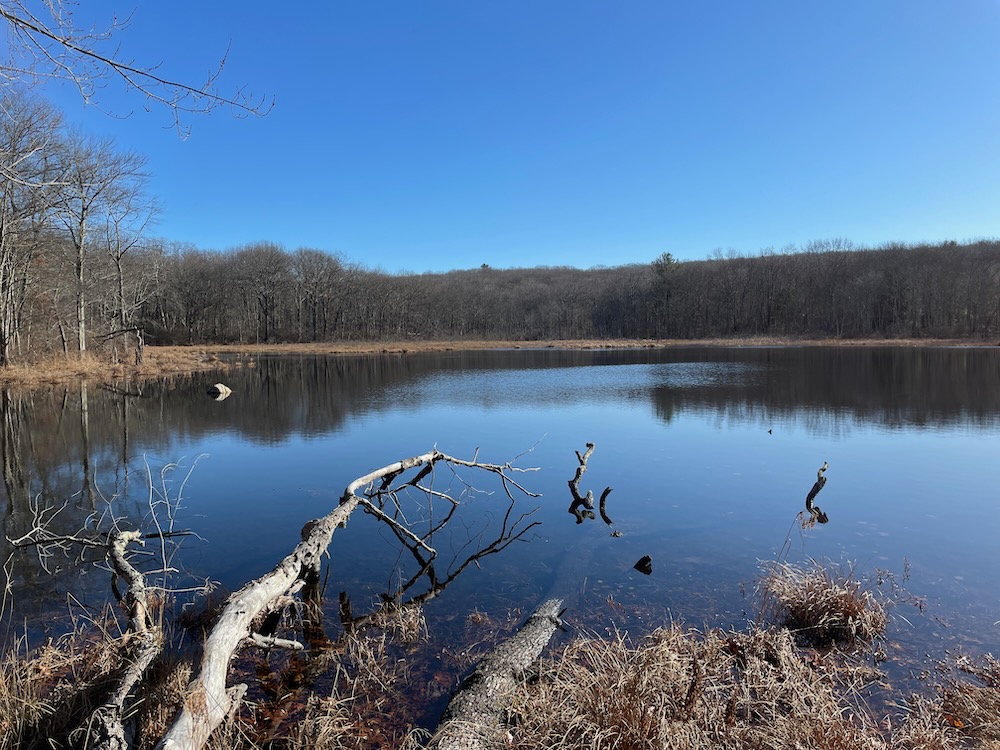 As we approached the pond from the back, Kev nonchalantly mentioned that the pond and the Mattatuck Trail is what he was talking about earlier. Phew. (KO is not a CFPA trail veteran, so the blue blazes didn’t mean anything to him… which took me some getting used to.)

Roadwalk! But it’s largely on a sidewalk past some suburban houses. It’s kind of nice here, in a weird way. It could be blazed a little better, as we had to make a turn onto another road, but I realize that’s tough to do in what is essentially a neighborhood. 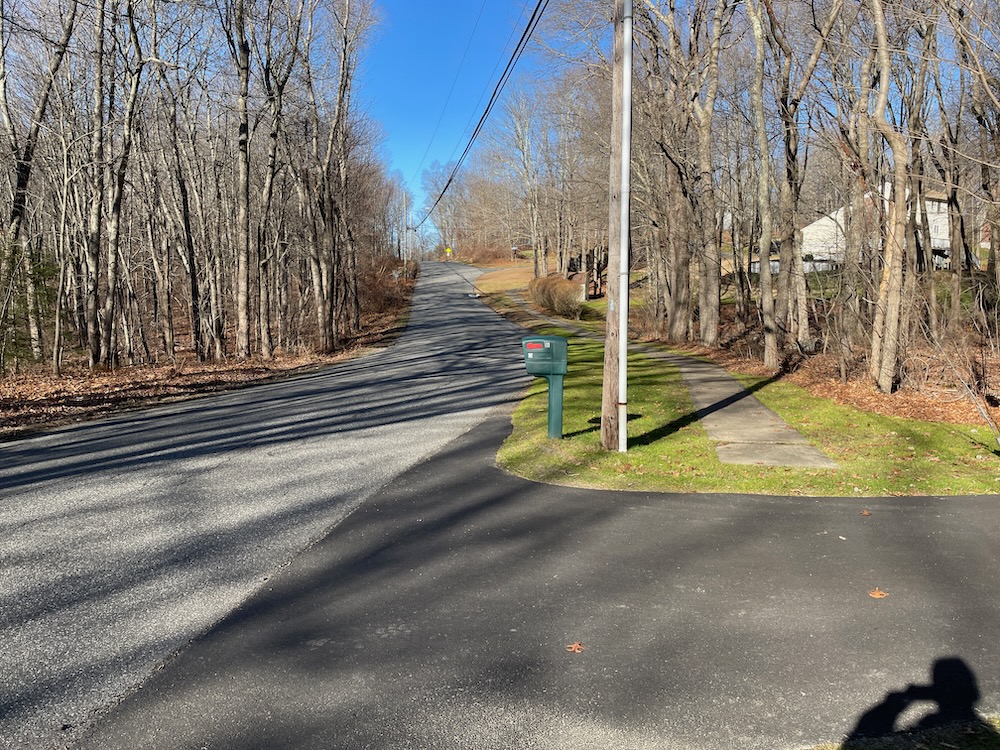 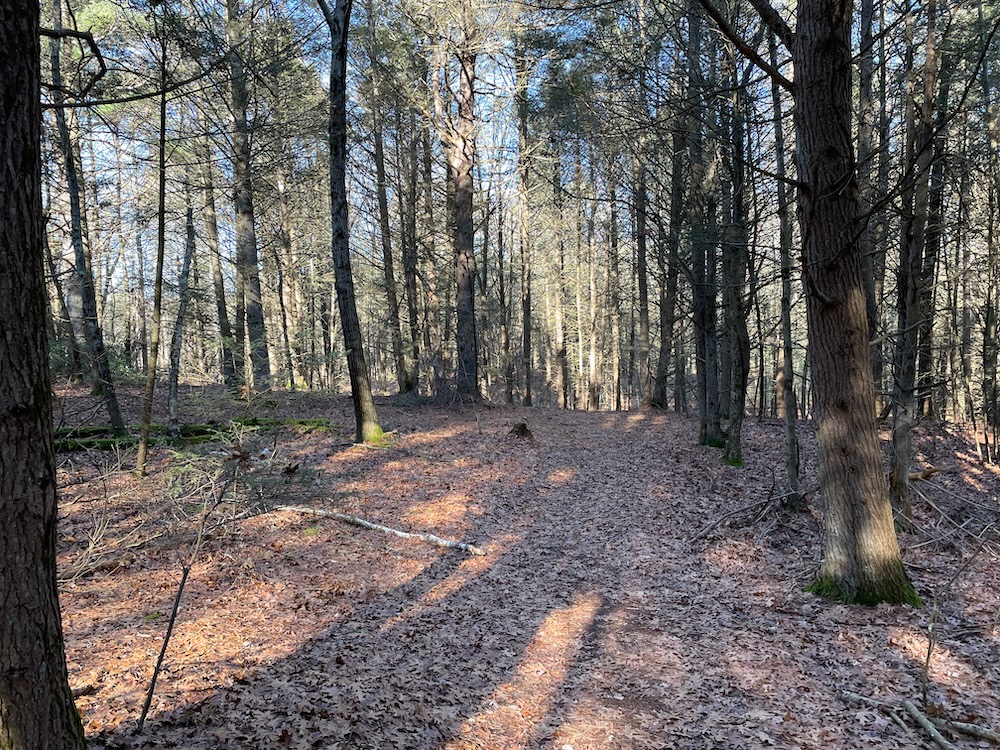 The turn off of Allentown Road took us through a skinny easement between a couple houses and into an impressive pine grove. What a cool little piece of land to have as a backyard for those people. By the way the trail makes some sharp turns, it’s clear that those property owners were sure to keep their property… theirs, but after a couple of minutes, all that was behind us and waterfalls were ahead.

“What’s the best Connecticut waterfall” is an oft-discussed topic amongst “my people.” There are several contenders, and every once in a while someone will throw in Plymouth’s Buttermilk Falls. 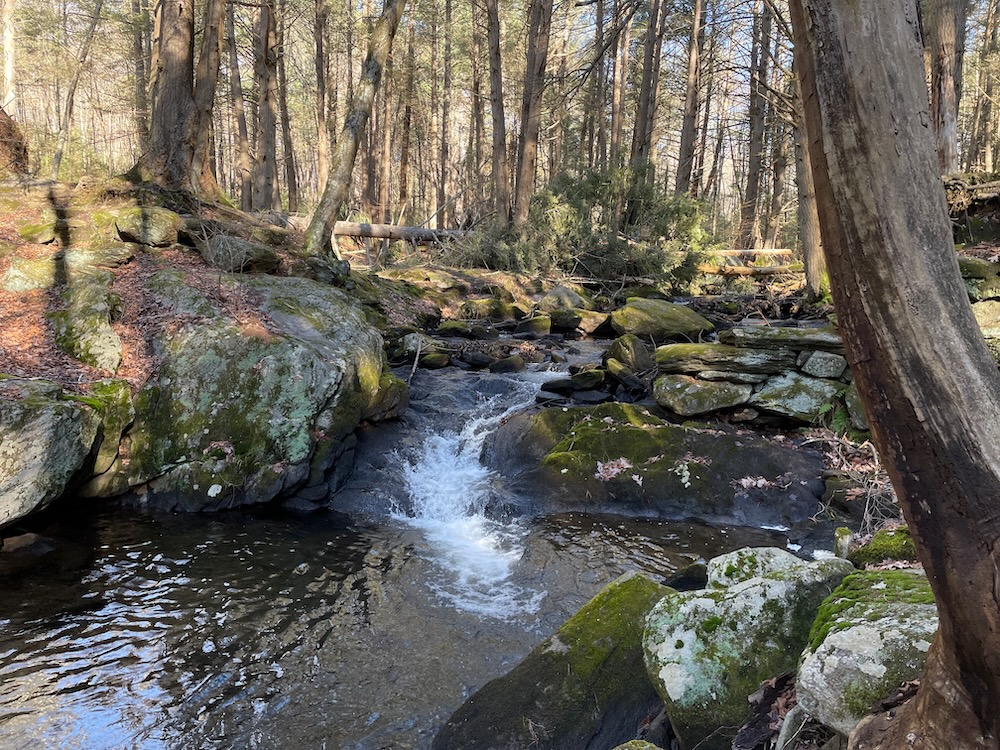 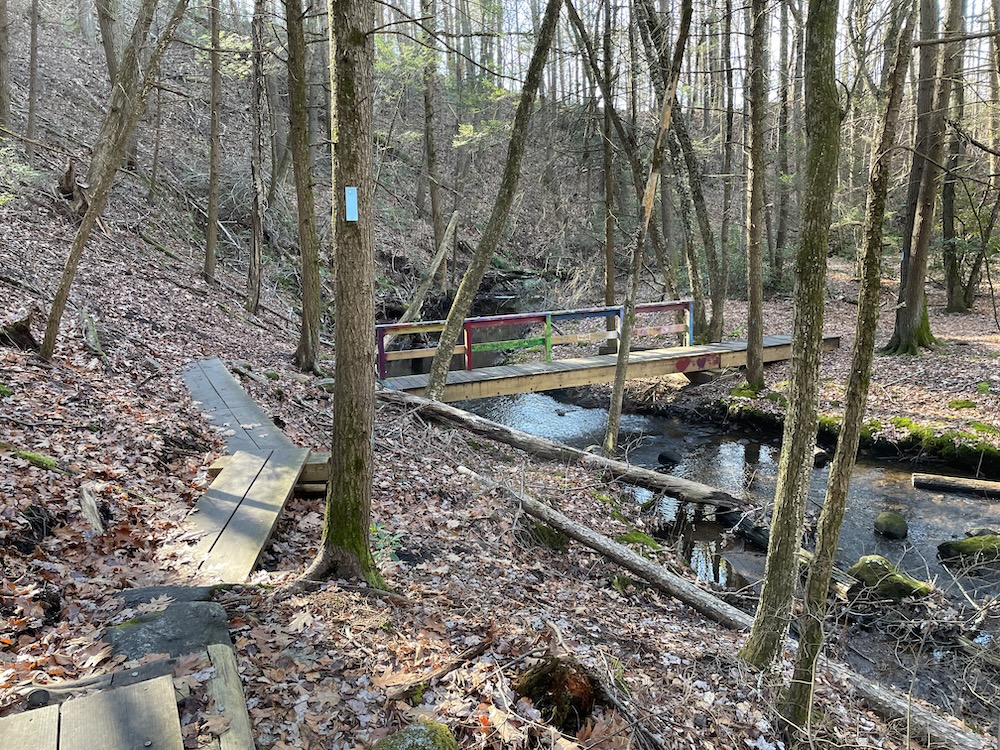 I’m here to put Plymouth’s Buttermilk Falls into that conversation. We first passed a little falls over an old dam that, while pretty, is a mere amuse bouche before the good stuff. Across a bridge and then we were staring down at several hundred feet of cascades, falls, tumbles, twists, and turns.

Wow. Stunning. And as Kev and I picked our way down the steep slope, they just kept going, and going, and going… There is parking below on Lane Hill Road and if you just want to see some cool falls, I suggest you come here, park there, and hike up. 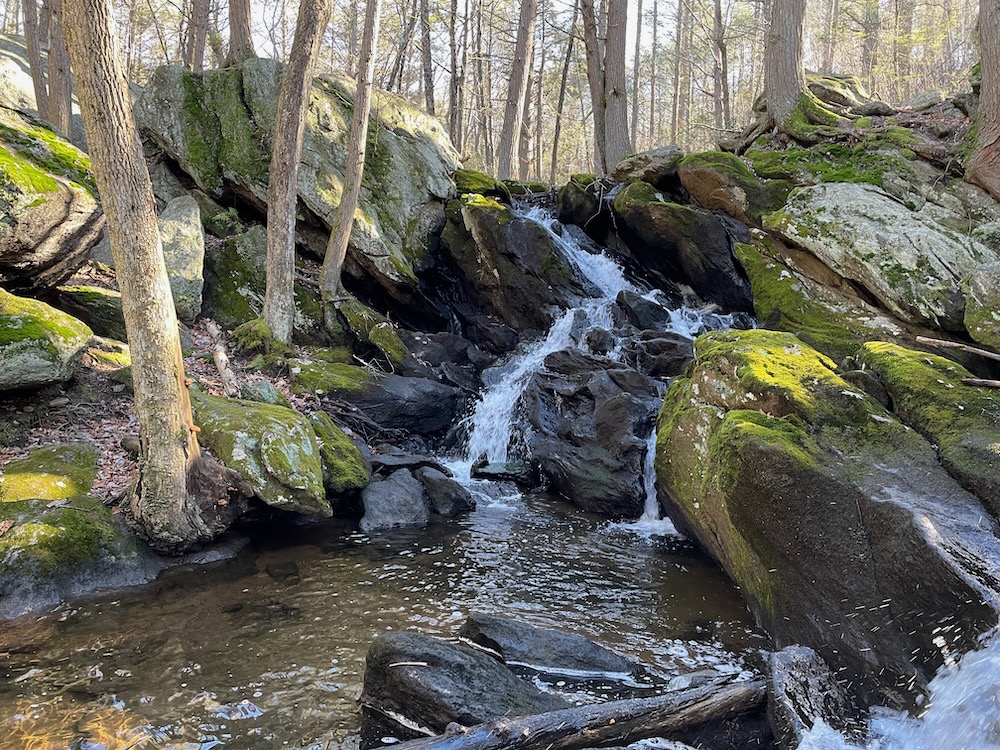 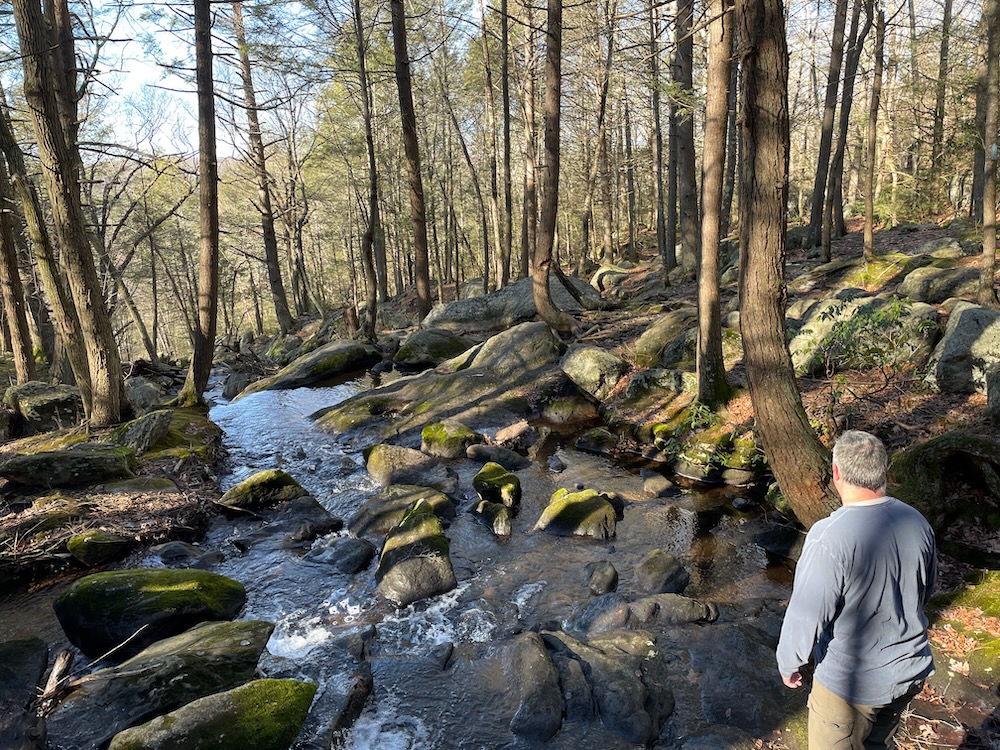 Judging by the herd paths all over the hillside, it’s clear that locals (at least) know what they’ve got here. Buttermilk Falls is beautiful.

After the falls, we were slapped back to reality with a rather dangerous road walk up South Eagle Street. I was wearing blaze orange for the obvious reason, but as we crossed Hancock Brook squeezed up against a jersey barrier around a sharp corner as an oil delivery truck barreled down the steep hill towards us, I was glad I was wearing it for an entirely different reason. 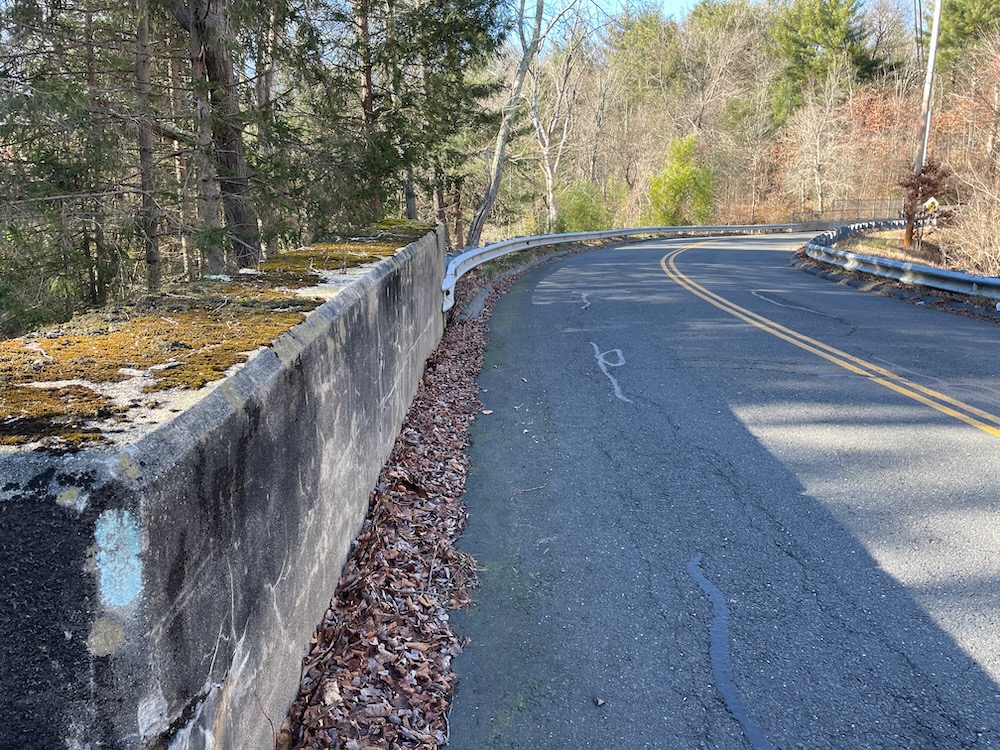 Obviously CFPA would rather put the trail anywhere else than here, but there really is no other option. Be careful and keep your head up.

We didn’t die and were back in the woods heading west once more. This last mile and a half before our car spot was fairly featureless and involved a lot of laurel and old woods roads. And it was wet – very wet. And 2022 was a dry – very dry – year. I can’t imagine what a mess this is in a wet spring. 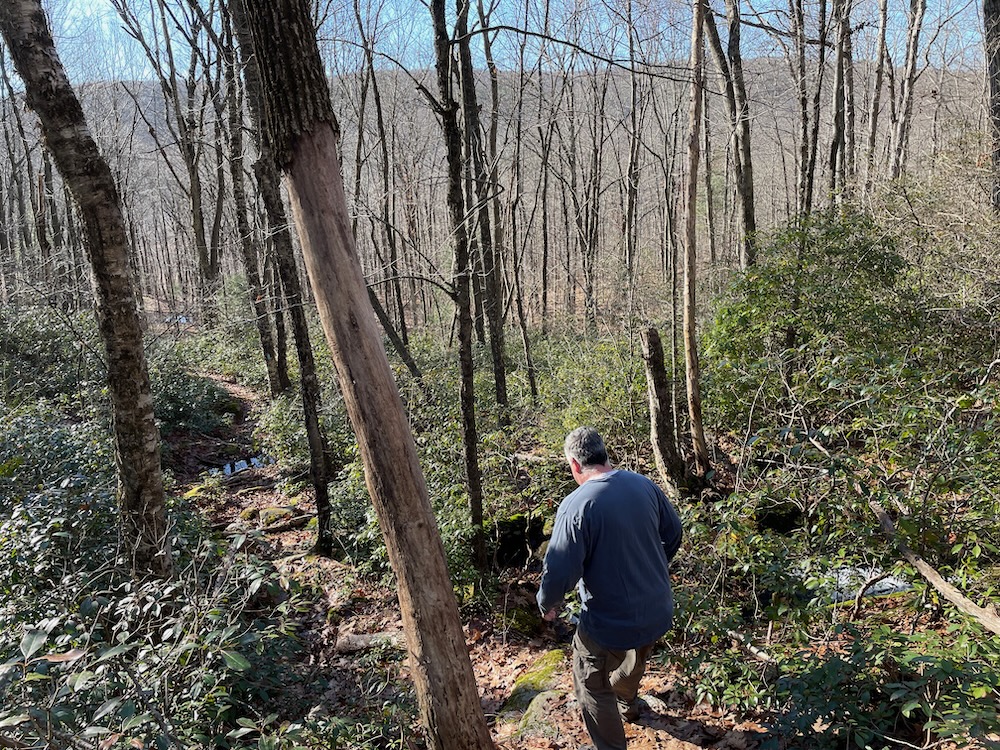 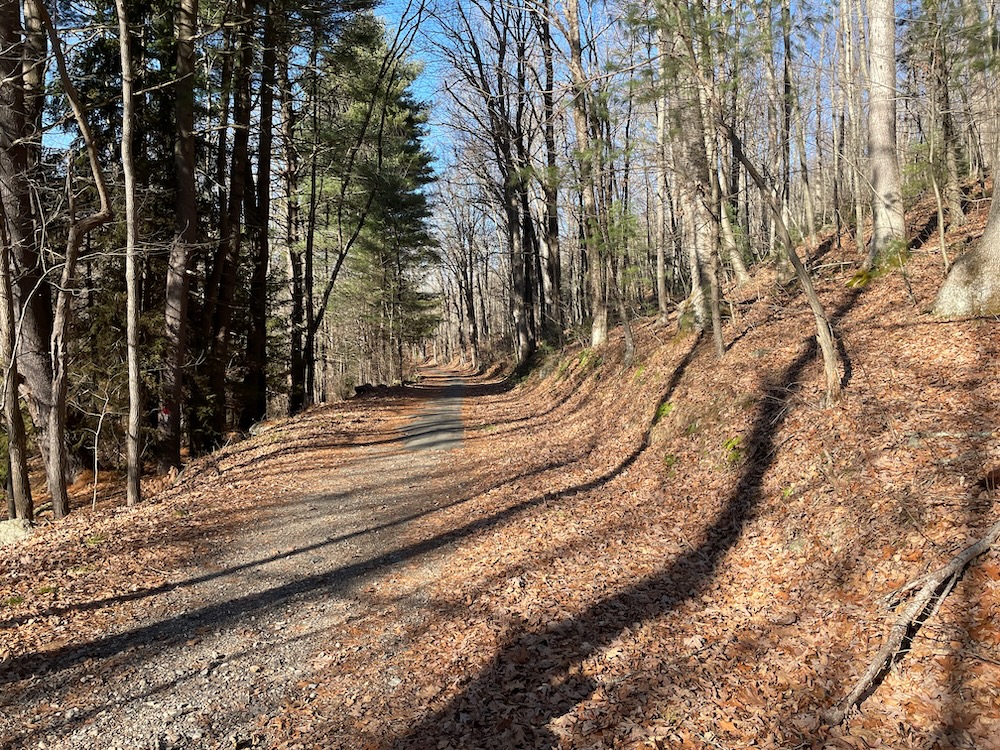 I mentioned to Kev, who was now dreading every downhill because of his knee pain, that it seemed like the trail maintainers just keep this section “as is” to get people from the awesome Buttermilk Falls westward as efficiently and quickly as possible.

We reached the final descent down to Todd Hollow Road. With the end in sight, Kevin’s knee pain was all but forgotten (not really) and we enjoyed the final half mile along a flat dirt road to the car at Keegan Road.

What a great introduction for me to the Mattatuck Trail! Kev and I made tentative plans to continue together in the future and knowing some of the highlights to come, I can’t wait.

Continue on to Section 2: TBD 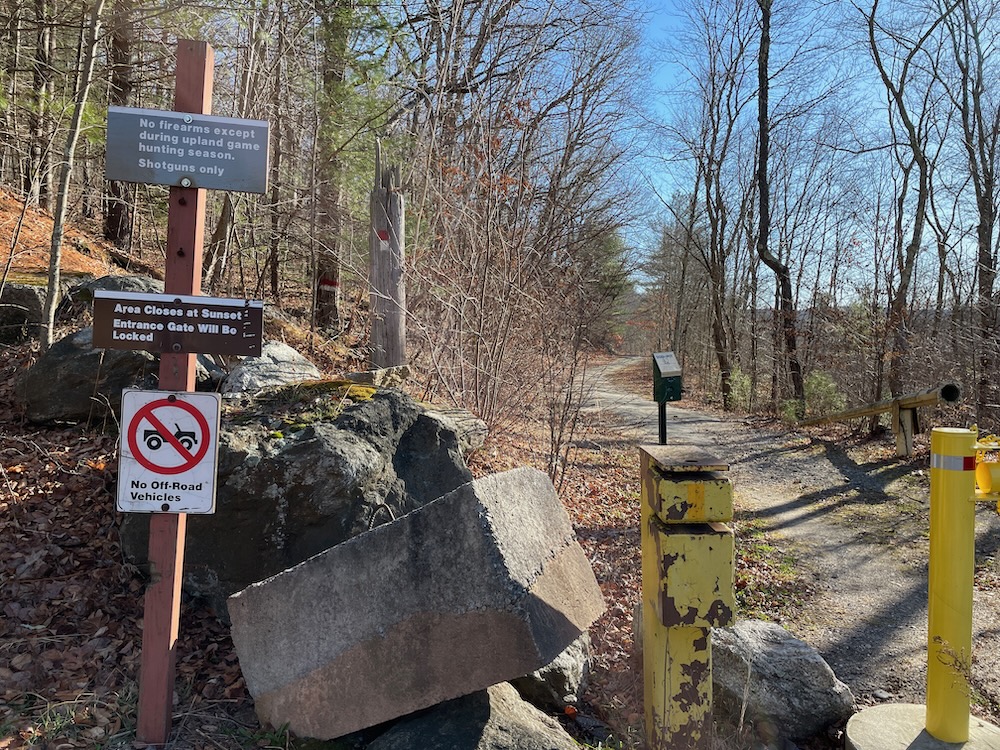