It was high time I got going on the Shenipsit. While not one of the “big three” CFPA trails (Quinnipiac, Metacomet, Mattabesett), I’ve always felt it should be included in any discussion on Connecticut’s long distance trails. The Shenipsit has one distinct disadvantage however: There is a fairly large break in its continuity at Ellington before continuing on up towards the Massachusetts border at its northern terminus in Somers. takes hikers from the Cobalt section of East Hampton up into Somers near the Massachusetts border. 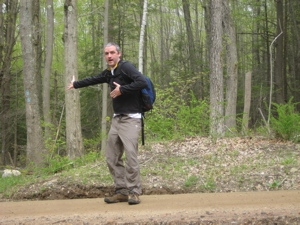 But we’ll deal with that later. For now, we’re on the western border of East Hampton – and will hike into Portland and Glastonbury.

The Shenipsit begins quietly enough along a hard-pack dirt road in extreme western East Hampton. Now, we know East Hampton isn’t exactly a one of our state’s hot spots (though it used to be, about 100 years ago) and the web of dirt backroads through the Meshomasic State Forest is really known only to trail runners, mountain bikers, and teenage drinkers.

The trailhead is fairly easy to find if one knows where to look along Gadpouch Road. 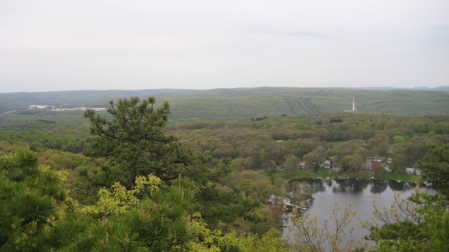 If you’re only looking for the highlights along this stretch, you needn’t go far. Park your car here past the houses at the trailhead and begin the steep half-mile trek up, up, up to the Great Hill ridgeline. This healthy effort will reward you with a rather nice view of Great Hill Pond, the Connecticut River and Portland beyond. If its views you are looking for – and nothing more – turn tail and head back to your car, because that’s it for the next several miles. 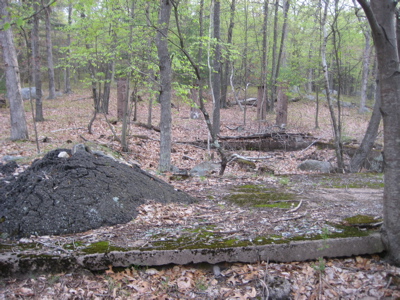 Of course, that’s not my style. After the short overlook side trail, I continued north up the Shenipsit along the ridgeline. For the next couple of miles the trail straddles the East Hampton/Portland border. It’s not exactly the most exciting stretch of trail in the state, but at one point I was startled from my inward thoughts by two very large herons flying just above the tree tops over me. I wasn’t quick enough with the camera but trust me, it was really cool.

There is an old abandoned quarry a couple miles in that deserved some exploring. This part of the state was noted for its cobalt mines back in the day. I didn’t really go poking around in any abandoned mines, but perhaps someday I will. I crossed a stream that is only interesting in that the green mosses give the small waterfall the appearance of being green. 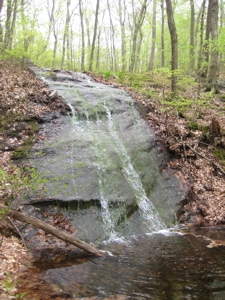 Not exactly tempting to drink, that’s for sure. Just past the green stream, the trail climbs up Bald Hill – which at 893 feet is 123 feet taller than Great Hill. Not so great after all, are you Great Hill? There may be views up there in the wintertime, but not so much with leaves on the trees.

I was about a third of the way through my hike and so far it had been quite nice. I’d read a few trail reviews that wondered why the Shenipsit bothers continuing south past Route 2. I was about to discover why. Perhaps the dead shrew along the trail was a talisman of sorts: 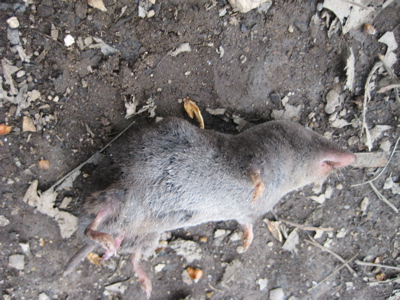 That shrew seemed pretty well “tamed.” There is a very nice bridge over a marshy area and then the trail changes to follow an old woods road for the next few miles. These are the miles that naysayers say not to bother with. Well, some of us “must” bother with every mile of every CFPA trail and quite honestly, we’re glad when we do. 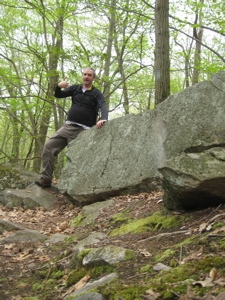 The trail is relatively flat here and there are no views at all. However, that doesn’t mean it’s not challenging. With all the rain we’d received recently in Connecticut, the southern end of the Shenipsit has become an excellent example of water erosion, ATV damage and mud.

Here, in pictures, are the various ways water makes an easy hike difficult: 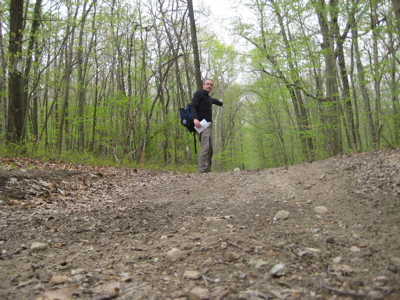 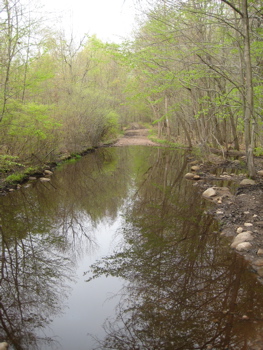 Hm. I’m sure this is a ball of fun in a Jeep. Not so much on your feet though. 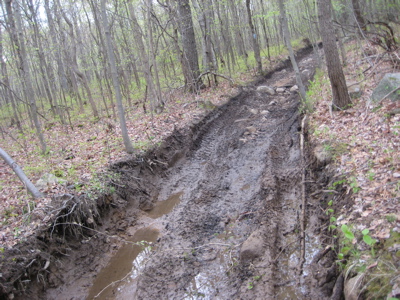 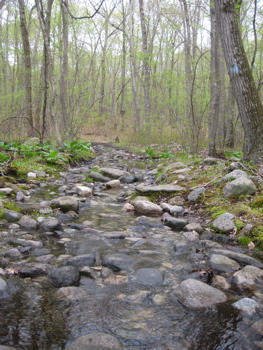 And the ol’ trail-waterfall effect

Those were four pictures in a row on my camera. I don’t mean to suggest that this is how the trail is year-round or that there aren’t pleasant sections during these miles. There are… But apparently they weren’t exciting enough for me to photograph. But that belies the fact that I was hiking through the Meshomasic State Forest – and that, my friends, IS exciting. 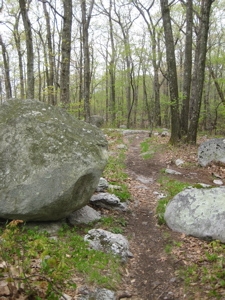 The forest was originally purchased to provide private landowners with examples of good forest management practices. During the Great Depression, two Civilian Conservation Corps (CCC) camps were located in the forest. It was the CCC who built most of the gravel roads in the forest.

Today, about 75 acres per year are harvested. This is a sustainable rate of harvest that also increases biodiversity in the forest and makes the forest more resistant to such disasters as uncontrolled wildfire and destructive insect outbreaks. 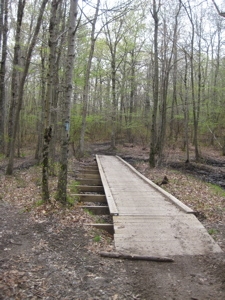 Once off of Portland Reservoir Road – which I don’t think you can drive on – the trail gets noticeably better as it becomes trail-width again and makes its way toward Route 2. There are a couple connector trails here as well – one to Mott Hill Road, which looked like it slogs right through a swamp and another one that connects with Dickinson Road. Both roads are in Glastonbury and judging by what I saw from the Shenipsit, opt for the Dickinson connector if you must.

But as long as you aren’t hiking with little kids, I suggest sticking to the Shenipsit proper and hiking through the laurel and rhododendron down the hill to Route 2. The trail is clearly blazed along this last pre-highway section and heck, there [was] a blaze right at the highway! The dangerous crossing is made easier by the swath of “forest” between the East and West highway lanes, so you get a nice break in between Frogger runs. 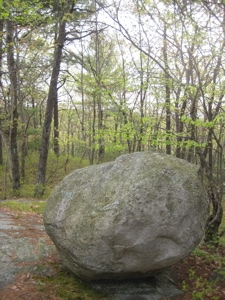 2018: The trail no longer “officially” crosses route 2 like this. It requires a circuitous roadwalk along Dickinson, Mott Hill, Country Club, and Toll Gate Roads. It is at least 2 miles and I’m glad it didn’t “officially” exist when I hiked this section in 2009. I’m not telling you to just “bushwhack” across route 2 – because it’s dangerous and no longer part of the trail – but boy oh boy, it sure is shorter. I assume all blazes to the highway are gone, and the oval sign mentioned below is no longer there. Also, commenters have noted a 5-foot high underpass that is easily navigable. The CFPA has looked into making this the official trail, but ultimately decided against it for safety reasons as well. (Psst! Do the tunnel! It’s fun.) 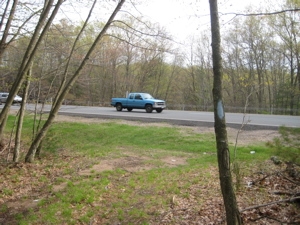 There are no blazes in the median, but there is a clear pathway and once on the other side, you’ll see the familiar blue oval sign marking the trail. Note: you will get funny looks by the people whizzing by at 80 mph, but no matter. To actually hike around via the connector trails and roads would add boring miles of road walking and as long as you have your wits about you, it’s not too insane to cross the highway.

Disclaimer: If you get hit by a car, it’s not my fault. Or the CFPA’s – the Walk Book states you should make the long walk ’round. Just don’t be stupid. 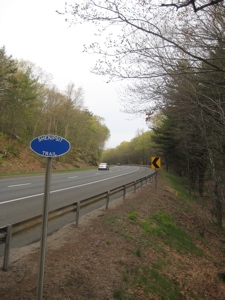 Once across the highway, I hiked the mile or so along the white-blazed connector to my car at the end of Toll Gate Road, just off of Exit 11. This little jaunt is actually fairly interesting as I passed the remains of what I can only assume was an old toll plaza. 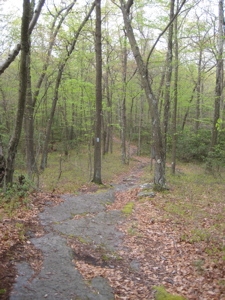 I also passed the Glastonbury shooting range which for me was a bit less interesting.

I know the remaining miles of the Shenipsit are nicer than these first eight. I know this section gets a bad rap but it’s still interesting and definitely has its highlights. Don’t tell me you’ve hiked the Shenipsit unless you’ve REALLY hiked ALL of it. And that includes these southernmost miles. 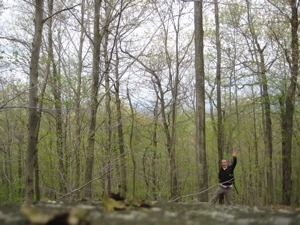 Continue on to Section 2: A Blistering Pace… A Bloody Failure