You’ll Owen Me For This One
Simsbury Land Trust’s Owen-Mortimer Trail, Simsbury
April 2020

This little blue-blazed trail could/should… will be important someday. More on that in a minute. I parked in a little pull-out on East Weatogue Street even though there’s a true hiker’s lot just south of there. 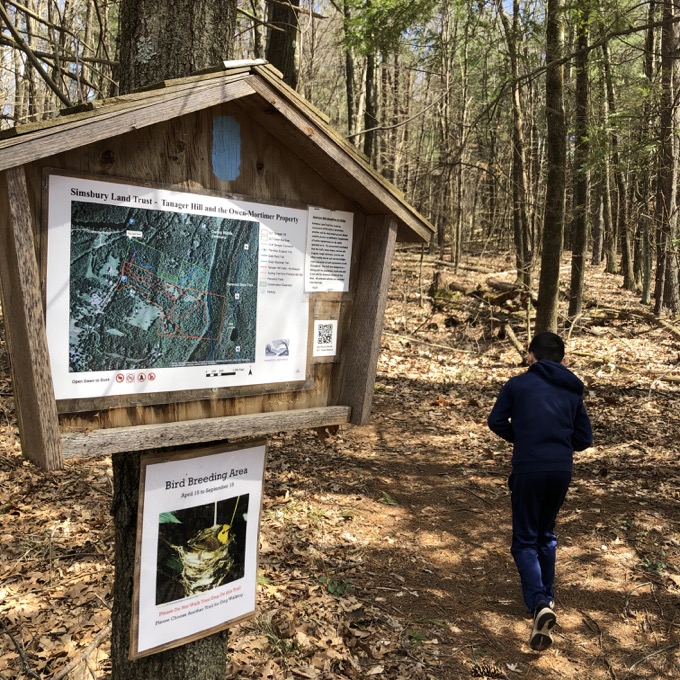 Let me explain: That lot is for the Simsbury Land Trust’s Tanager Hill property – a property that adjoins Owen-Mortimer. In fact, it’s almost impossible to hike one while avoiding the other. Both parcels contain trails that wind up at the same powerline cut and both connect to the same trail which heads steeply up to Penwood State Park. 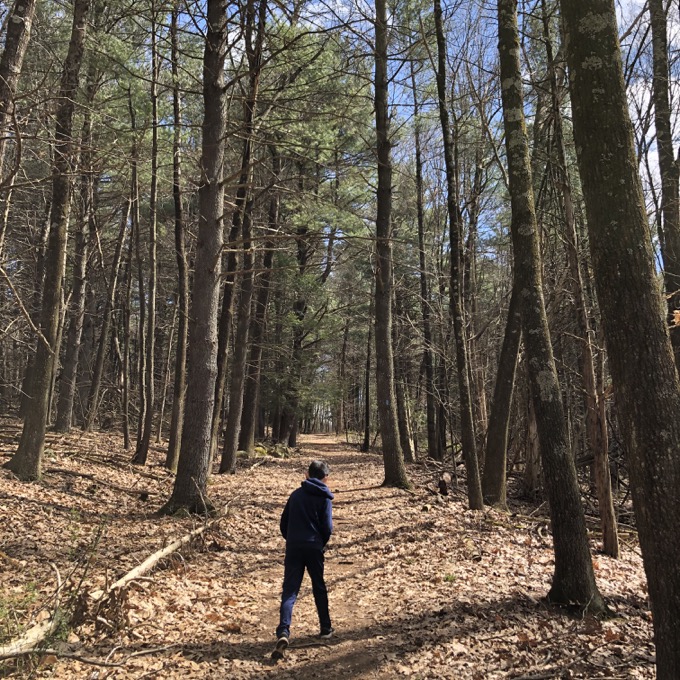 At the time of my hike, I knew the future CFPA East-West Trail would utilize either the Owen-Mortimer Trail or one of the paths at Tanager Hill on its way from Penwood west to the Appalachian Trail. Now, as I write this, all evidence points to Owen-Mortimer. That is, the East-West Trail will officially begin up on the ridge in Penwood at the Bloomfield-Simsbury border and course down through Owen-Mortimer to East Weatogue Street, leading to a roadwalk to the famous Flower Bridge.

Time will tell if this comes to fruition, but there are preliminary maps and the SLT says this:

Importantly, Owen-Mortimer has been chosen to be the first section of a future east-west trail connecting the New England Trail with the Appalachian Trail. 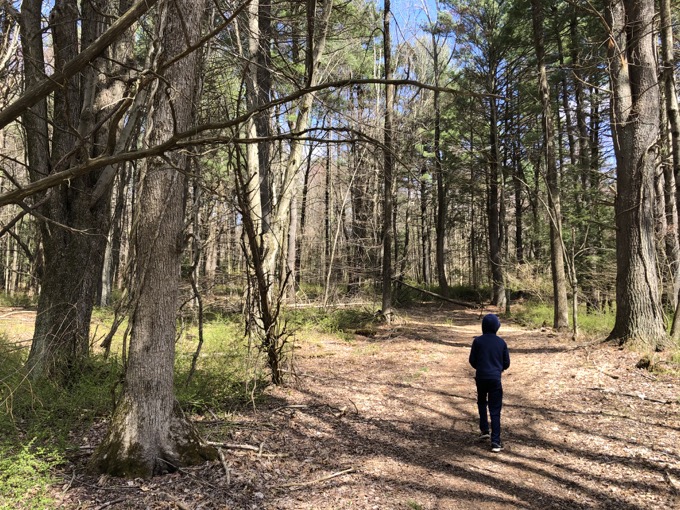 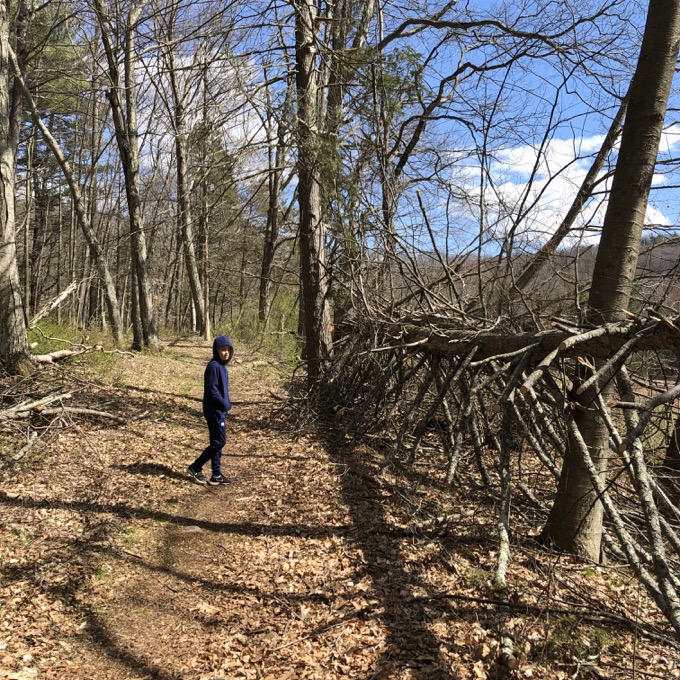 Note: I did not add the word “importantly.” That’s their word and of course I agree with it wholeheartedly. I can’t help but think the blue blazes of the trail here are an intentional nod to the CFPA’s blazing as well.

Additionally, after hiking both SLT properties, Owen-Mortimer is the clear choice anyway. It’s a really cool trail through a pretty property – and leaves East-West hikers with a slightly shorter roadwalk.

The Owen-Mortimer trail begins with an uphill section on an old farm road surrounded by numerous stone walls and cedar trees. Simsbury Land Trust has done extensive work here to remove invasive plant species. Further on you will be surrounded by mature forest with large pines and oaks. About half way up, the trail runs alongside the open fields of the Tanager Hill property. The upper third of the trail has boardwalks which take a hiker through an extensive wetland with abundant wildlife and interesting plants. 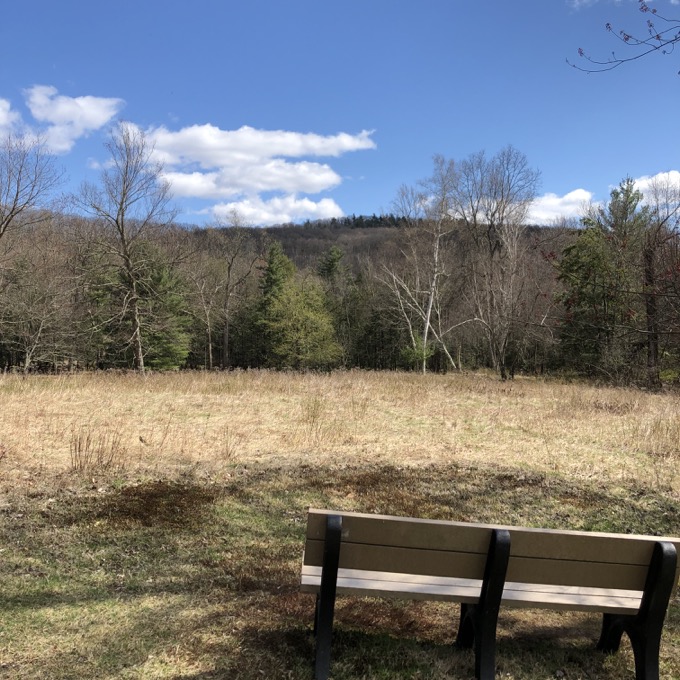 This was one of those hikes that Calvin wasn’t in the mood for for some reason. We were in COVID-19 times and I would think any opportunity to go somewhere and do something would be jumped at. He whined a bit about his shoes for the first quarter of a mile, but came around once he started noticing how majestic the woods here are.

Seriously – the deep woods here are far more enchanting than you’d expect. I also expected more of an uphill – we were headed up to the Talcott ridge at Penwood after all – but instead found flat open fields and marshes after the initial slight push uphill. 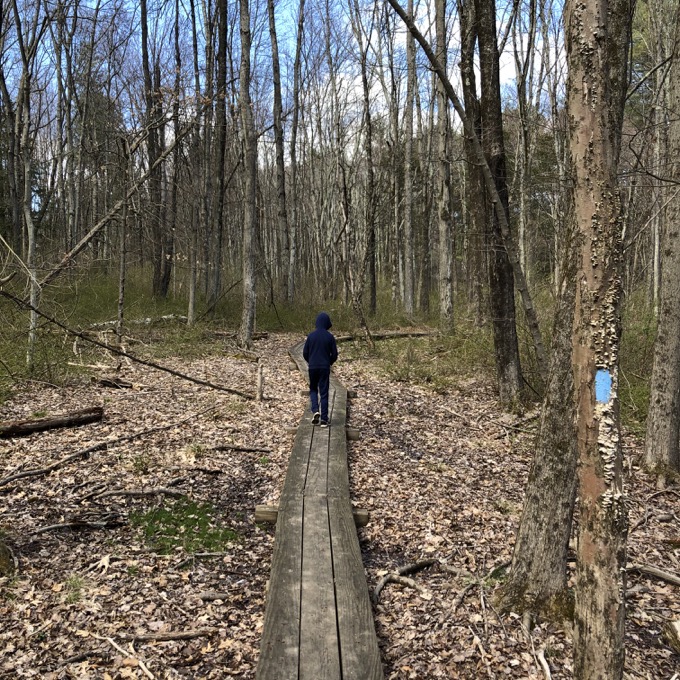 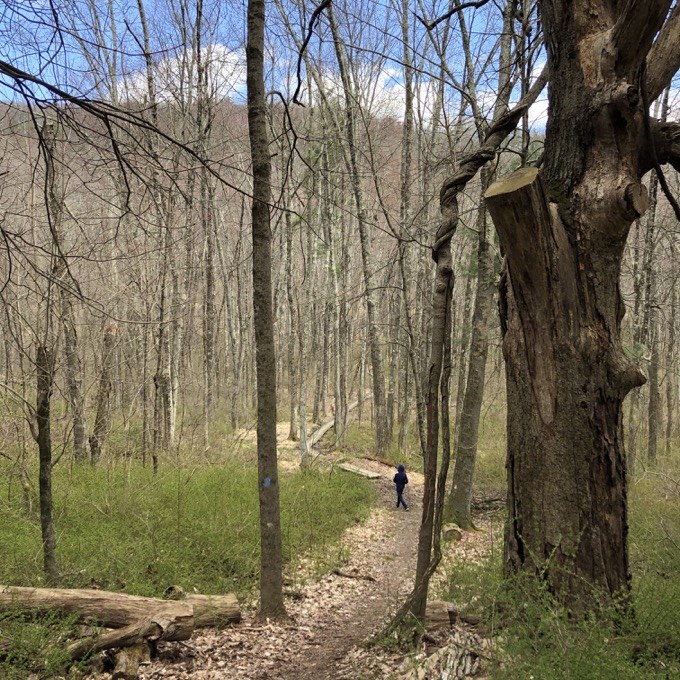 The series of boardwalks here were extensive and appreciated. There are so many trails on both sides of the ridge from Berlin to New Britain… from West Hartford to Simsbury… from Bloomfield to Granby… we are just fortunate to live so near so many of them. Heck, there’s another trail just north of Owen-Mortimer at the Darling Wildlife Sanctuary that’s owned by the town of Simsbury.

If you know what you’re doing, you can make a day connecting Darling, Tanager Hill, Penwood State Park, Wilcox Park in Bloomfield, the Stout Family Fields in Bloomfield and – hey, wait a minute! The Wintonbury Land Trust (Bloomfield) has done just that with the LaSalette Trail! It’s all coming together! My whole world! AaAIaaaAAaaA! 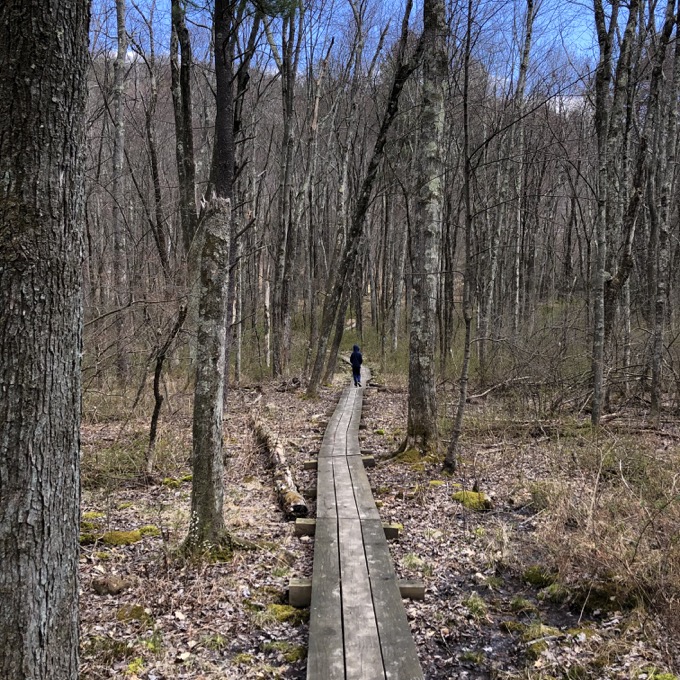 Calvin and I made it to the powerline cut which in April of 2020 is… sort of weird? Look at this path: 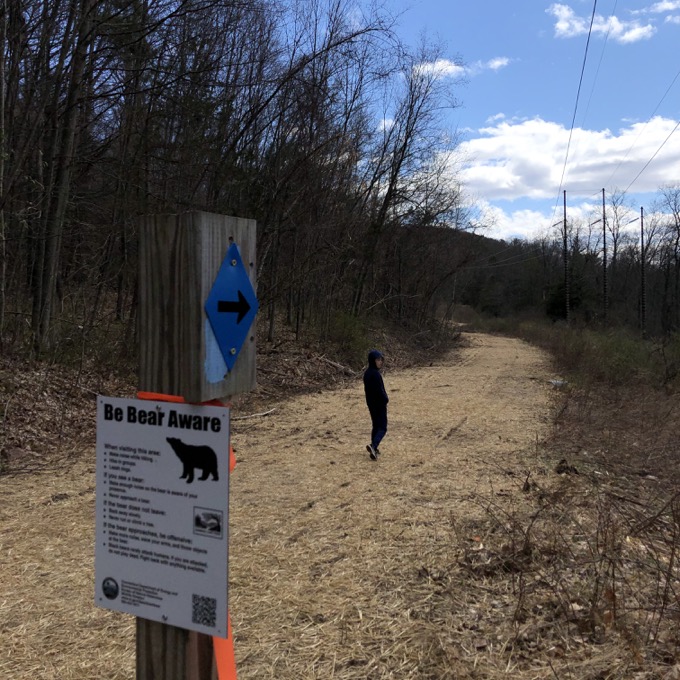 I appreciated it, but to keep it walkable is an impossible task. It will be a muddy mess 10 months a year. I assume this a temporary trail and they may move it into the woods towards Penwood a bit, but I don’t really know. At least it allows for some unique trail pictures. 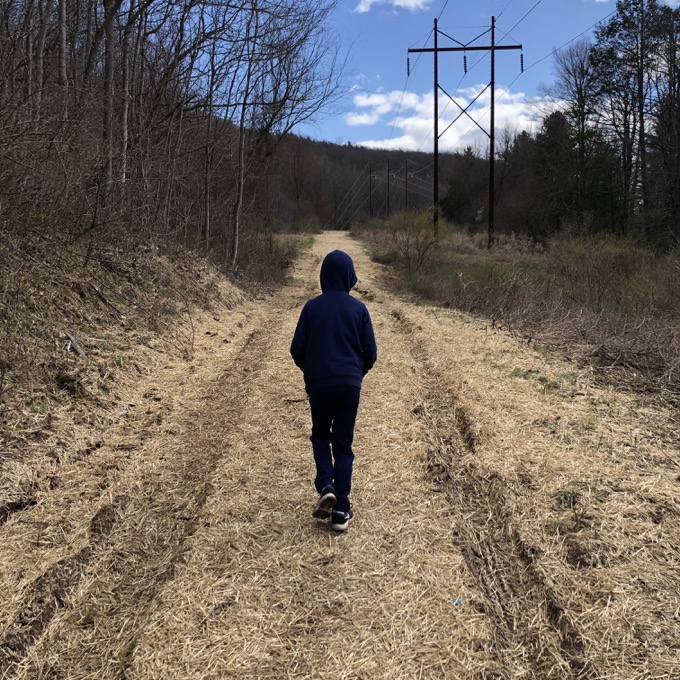 The trail is signed well, despite the difficulties here. We passed the connecting trail to the Tanager Hill property and found the blue-blazed path up to Penwood. Ah, here it is. Here’s the uphill to the ridge! 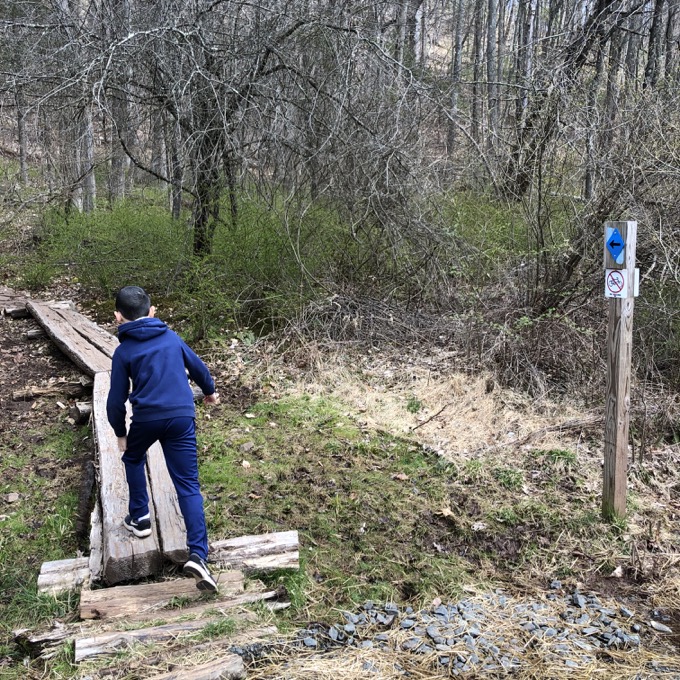 It’s not too bad, and some major trail work has been put into this section. We even passed a seasonal waterfall that’s probably fairly impressive after a major rainstorm. I think it’s overflow from Penwood’s Lake Louise. A few switchbacks and we made it to the end at the intersection with the state park’s Yellow Trail.

Yes, I find it somewhat odd that if this, right here: 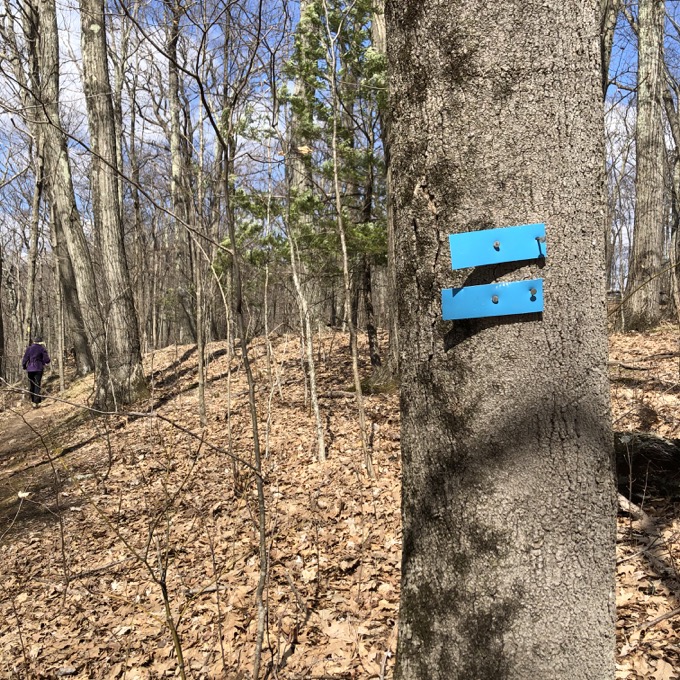 If this is the official eastern terminus of the future East-West Trail, that means hikers would need to get from the Metacomet just east of here over to the random Yellow Trail within Penwood. Why am I even thinking about this? No one cares.

There are no real views here, but that’s fine. You can get a feel for what a view would look like at least: 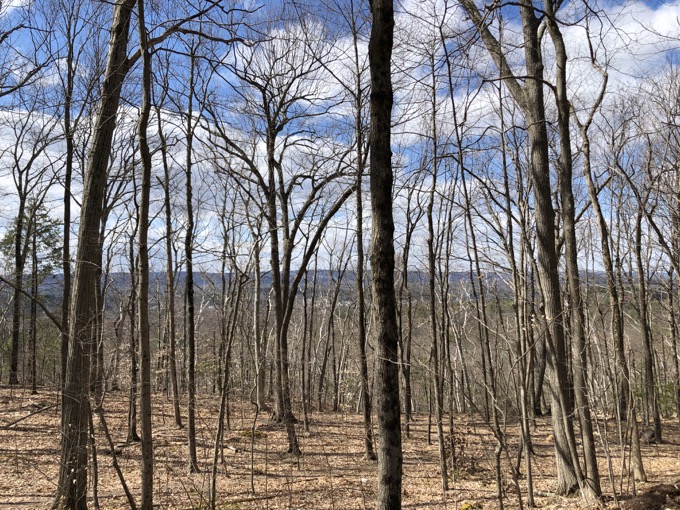 Calvin and I made our way down the same steep trail to the same powerline right-of-way and then ventured into the Tanager Hill Property – a place more different than similar to Owen-Mortimer right next door. 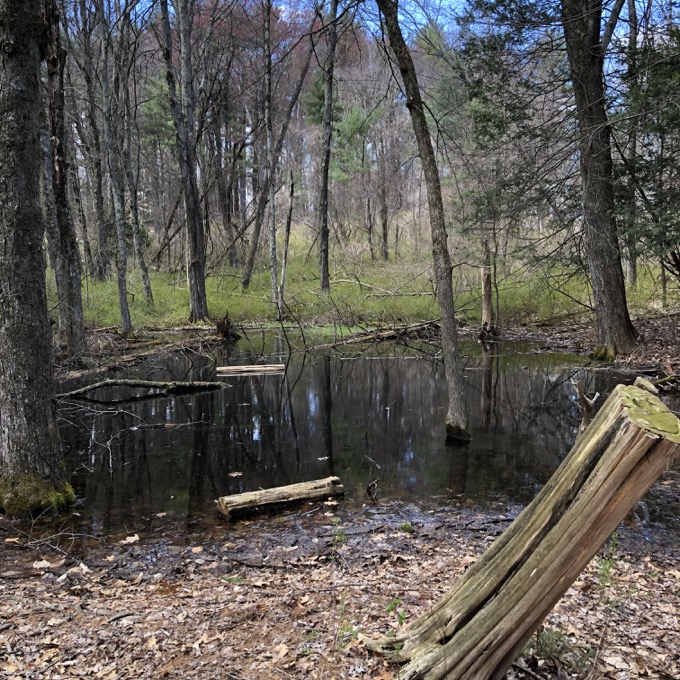