Who among you remembers Justin Wilson, the Cajun Chef, from his old PBS cooking shows? Man, that guy was great. Between his accent and Julia Child’s accent (and the foods they made), watching PBS cooking shows was great. Those shows with Yan Can Cook, and the British programming, I learned all my stereotypical accent impersonations from PBS. 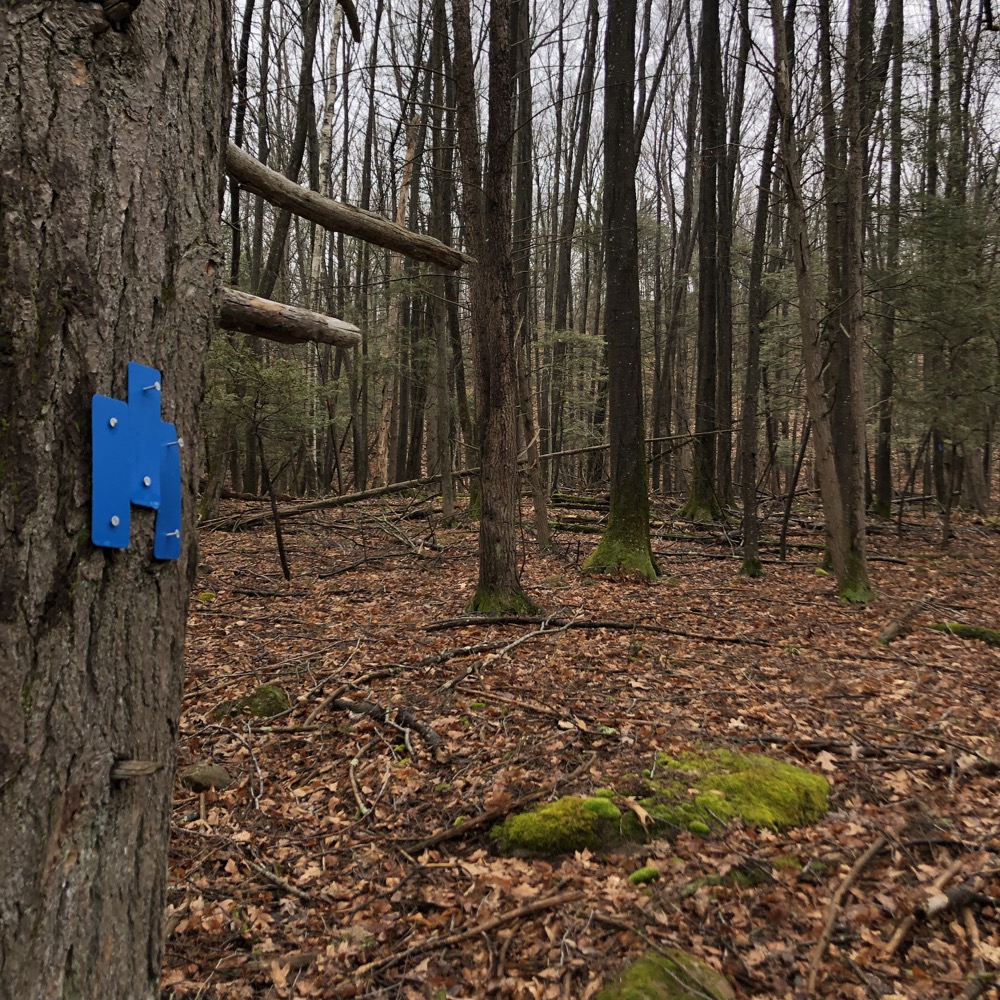 Anyway, Justin Wilson was always cooking with onions and I can still hear him in the back of my mind saying, “on-yonnn” the way that he did. (I hate linking things because links always break, but here’s a clip of Justin Wilson from his show.)

Calling this hike a “little bit of Onion” also makes sense when I tell you I didn’t hike the entirety of the Onion Mountain property. This gets a little confusing, but if you read my hiking stuff you probably expect that by now. Deep breath. Let’s go… 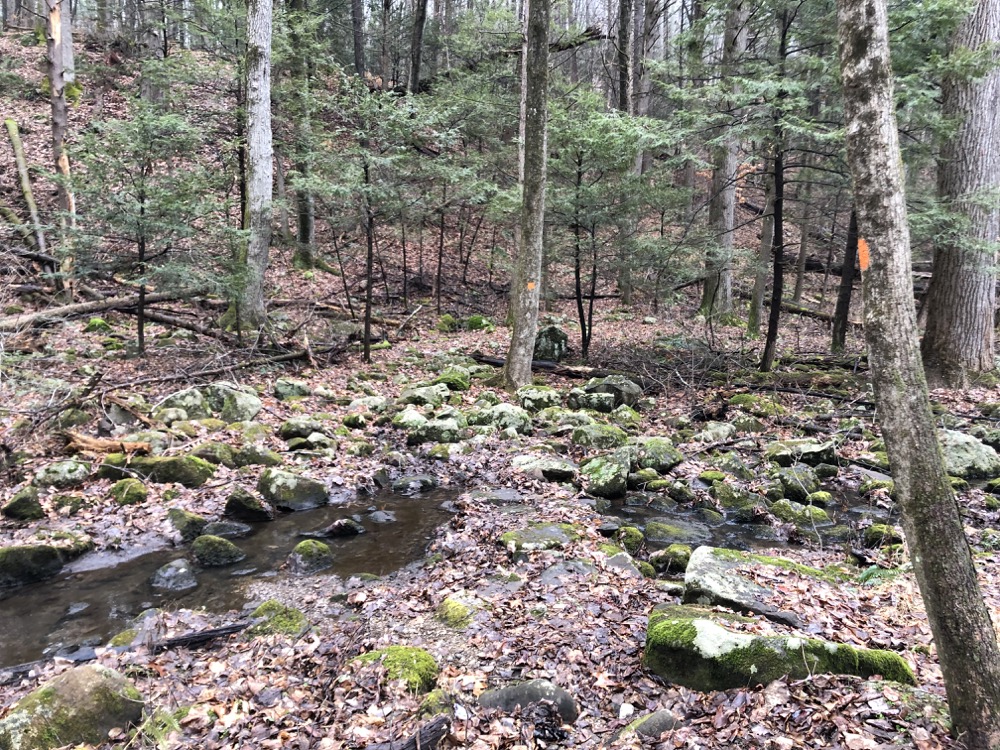 Onion Mountain straddles Canton and Simsbury. Onion Mountain Park in Simsbury has been a trailed property for many years and I hiked and wrote about it in 2013. A few miles south of that is the Roaring Brook Nature Center in Canton. Roaring Brook has its own trails, including a loop trail across the street which is in the Canton Land Conservation Trust’s Arnold Preserve. I hiked and wrote about that in 2013 as well. The Arnold Preserve is (was?) jointly managed by the CLCT and the Simsbury Land Trust. 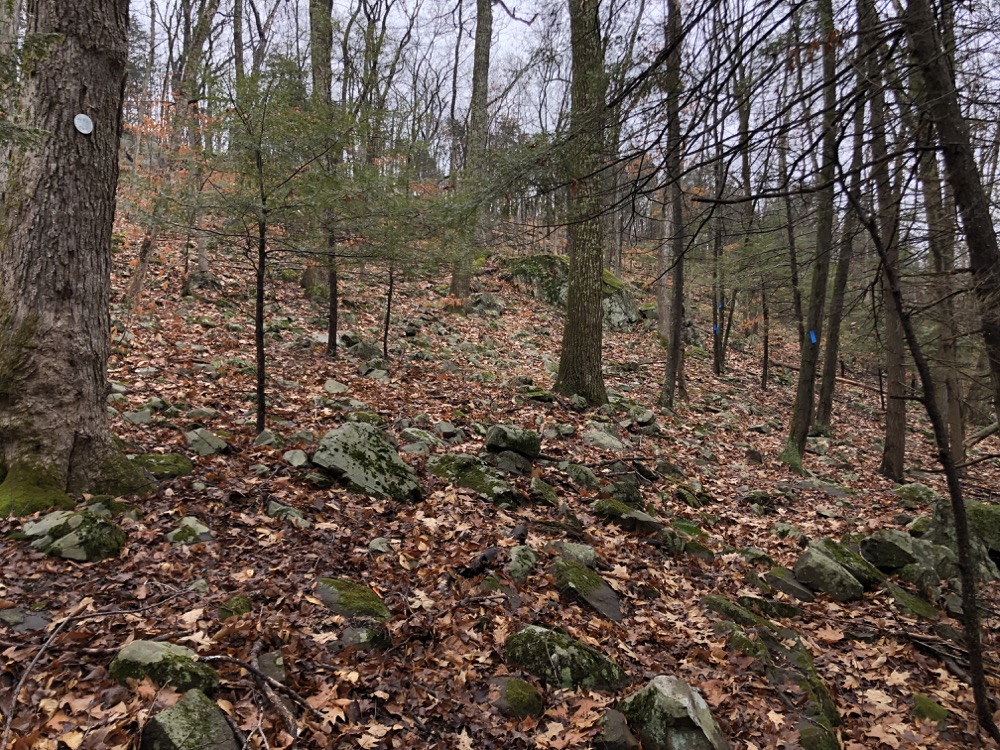 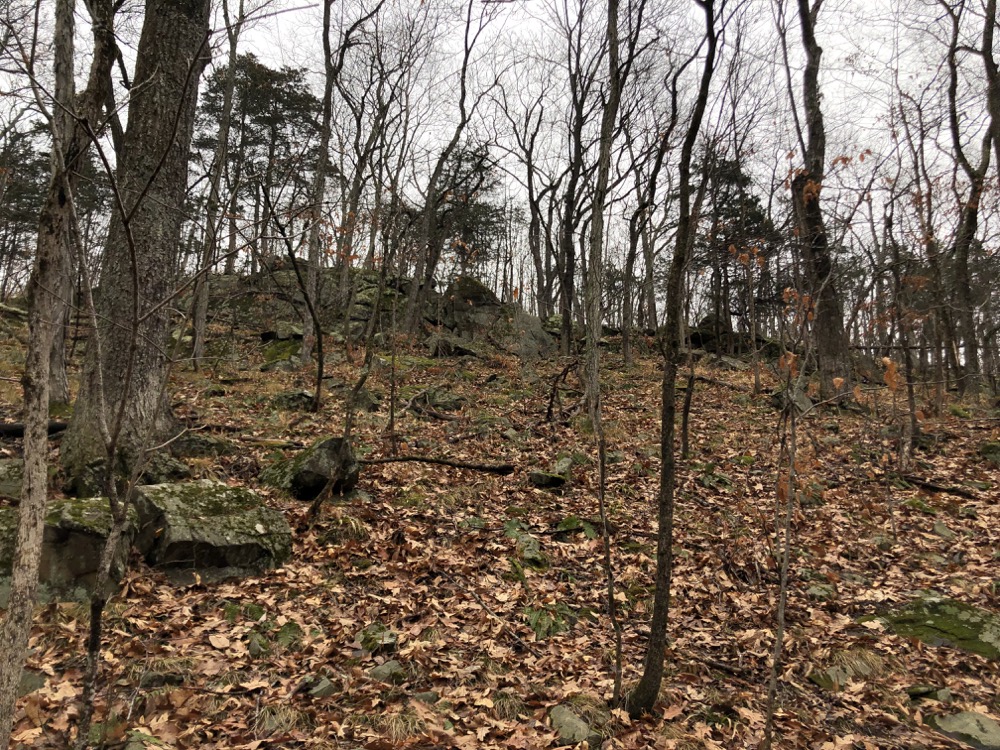 Yeah. It’s silly. But go with me here. The CLCT is clearing and blazing at least one trail connecting the southern trails to the northern Onion Mountain Park trails. I hiked most of its path, although it’s not official yet. That’s mostly what you’re ostensibly reading about right now. I’ve poked around the Onion Massif enough to call it “done” for now, even if I haven’t really “done” it all.

I will be done with it all if and when the East-West Trail makes its way through here. A few of us who like to pretend we know how that future trail will go wholeheartedly believe it will come from Stratton Brook State Park, through Town Forest using some of the Farmington River Loop Trail and then crossing West Mountain Road and taking hikers west up to Onion Mountain, then north to the Simsbury Park and onward to Tulmeadow Farm, West Mountain, McLean Game Refuge, Enders State Forest, and then west. 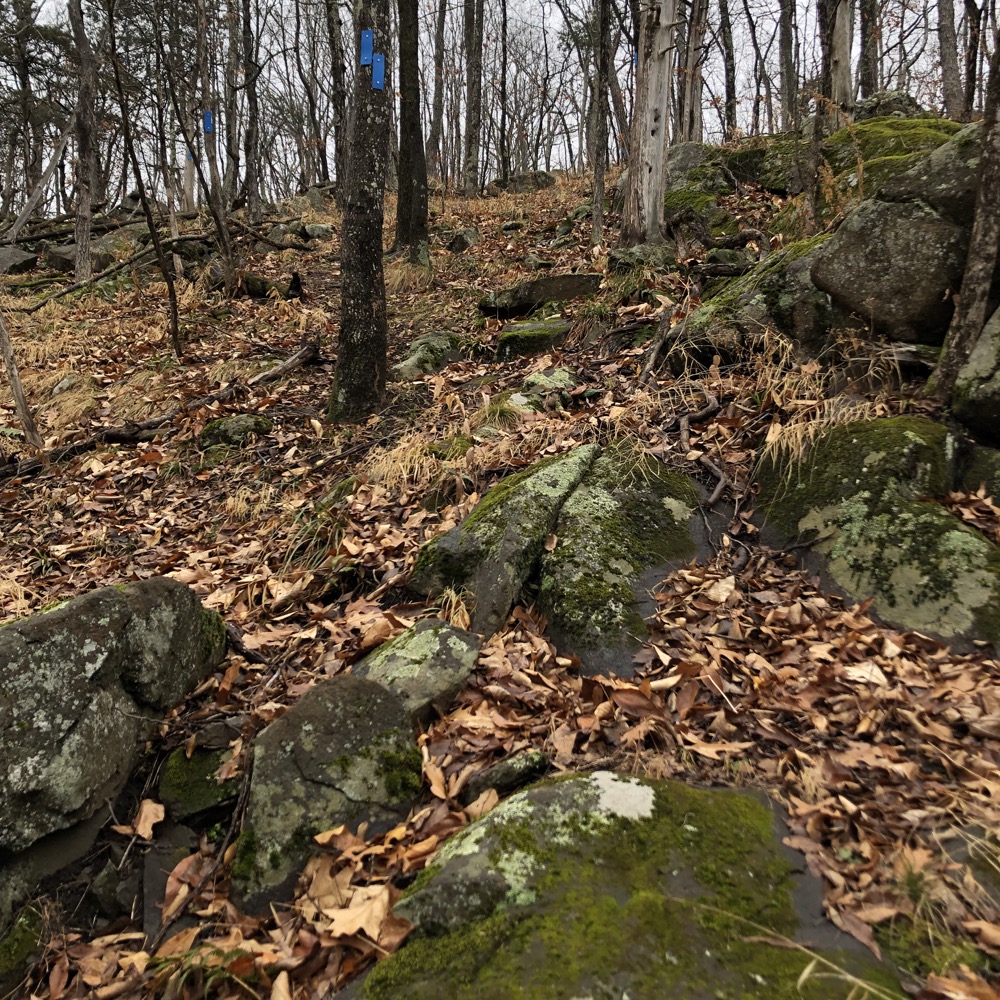 Got all that? Good. Now back to the trailhead across from Roaring Brook Nature Center. The same little orange loop is still there, down into and around a little ravine. But now on the far side of the loop, the CLCT has cleared and blazed the Onion Mountain Trail. Almost straight up the southwestern flank of the mountain.

In typical CLCT fashion, there are tiny little switchbacks that barely serve any purpose, but at least an attempt was made as this is a pretty steep grade. And it’s rocky and rugged and will surprise some Farmington River Valley folks who are more at home on our flatter and easier trails. 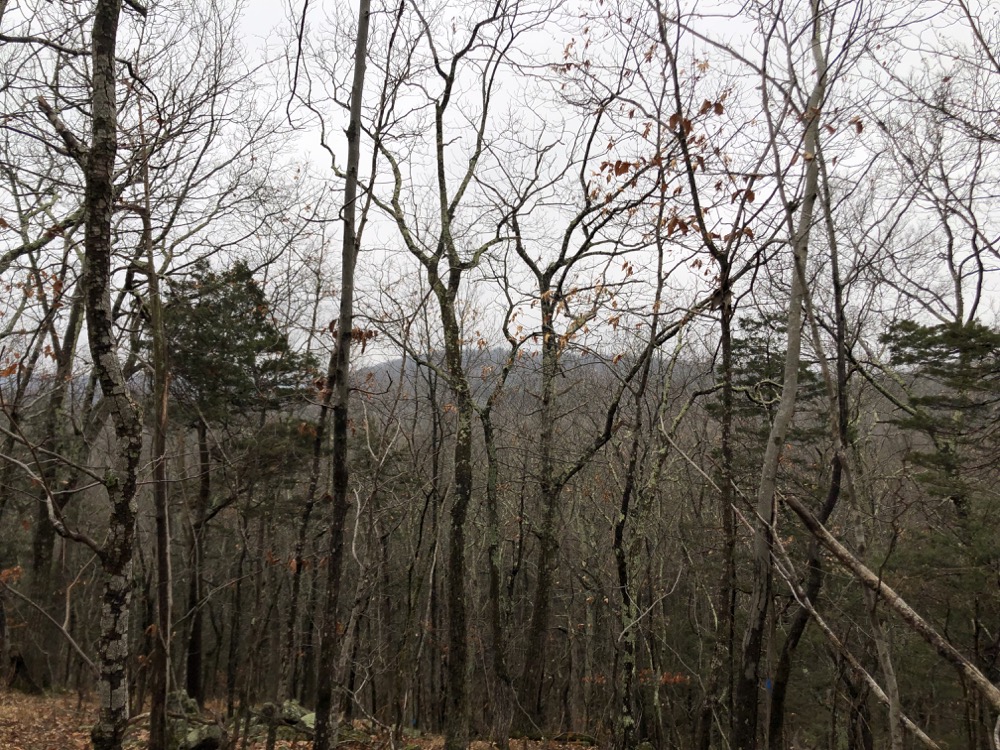 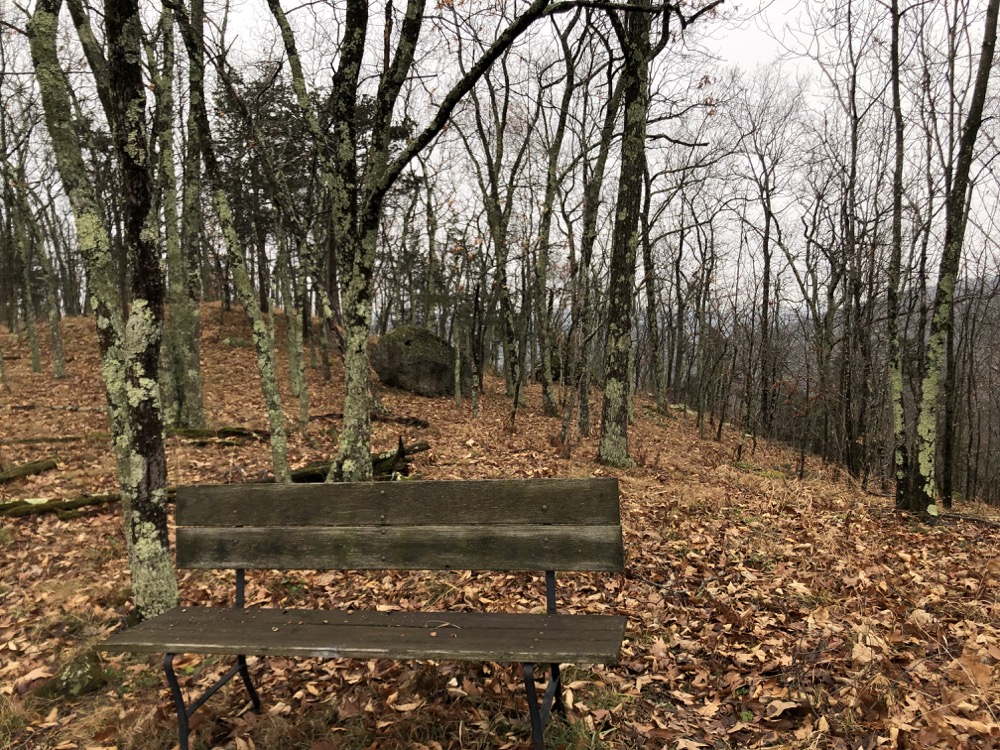 But once the trail attains the ridge, it can pretty much retain it all the way up until it comes down in the Simsbury Park. I made it to the top of this southern bump and there’s a bench up there with seasonal views both west and east. I was a bit surprised by this development, but it’ll serve some people well in the future.

Just north of this sub-summit and bench, the blazed trail ends. An old woods road heads down to a side street that will likely allow access in the future. I decided to forge ahead, as there is a pretty clear herd path along the ridgeline and I am sure the official trail will follow this before 2022 is half over. 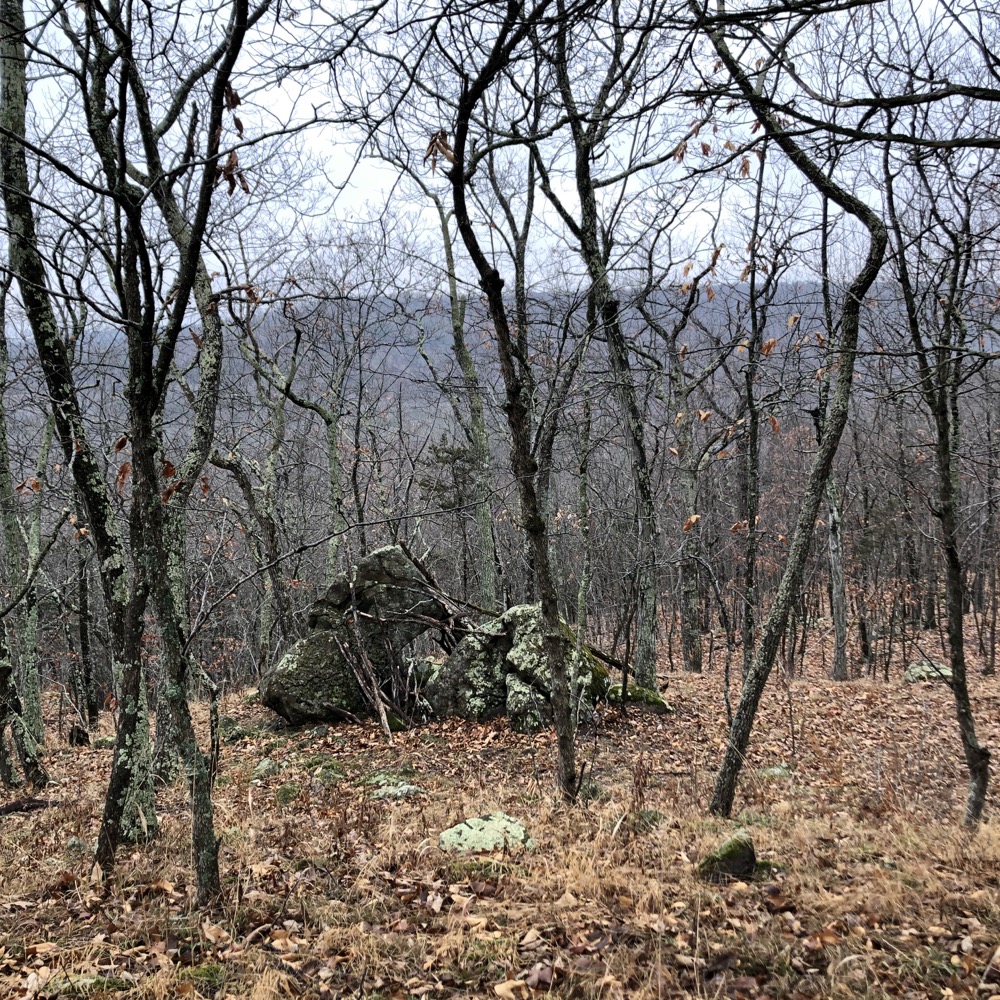 I had a few blowdowns to contend with along the way, but this ridgeline walk is no different from those along the Metacomet Ridge a dozen miles east of here. Sloped gradients to one side, sharp drops on the other with slightly stunted cedar and scrub oak trees. Classic central Connecticut basalt ridgeline stuff.

The “trail” was a typical herd path; fading and coming into focus over and over as the few people who walk this route wander and waver when the situation calls for it. I bumbled around for about 3/4 of a mile before returning to the marked route and my car. It’s at that point that a blue-blazed half-mile trail joins from the east. This will be, I believe, the East-West Trail coming up from West Mountain Road. 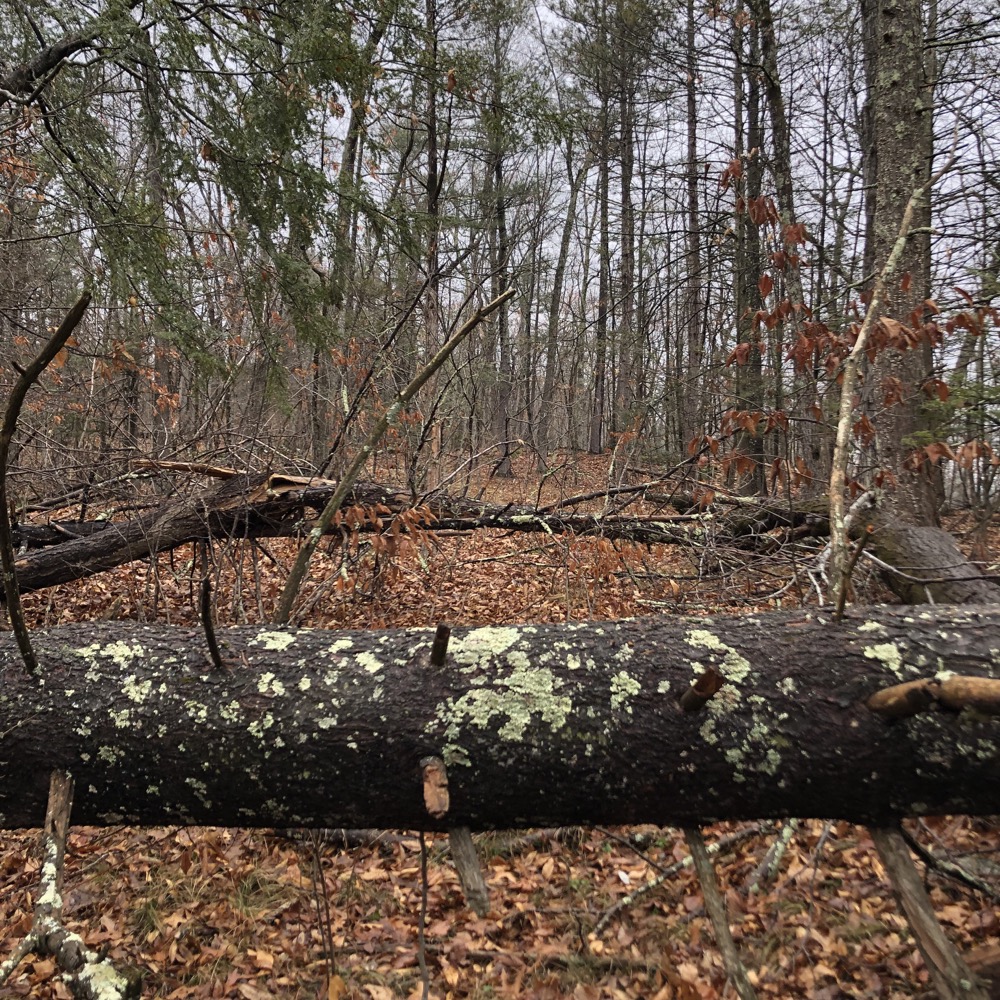 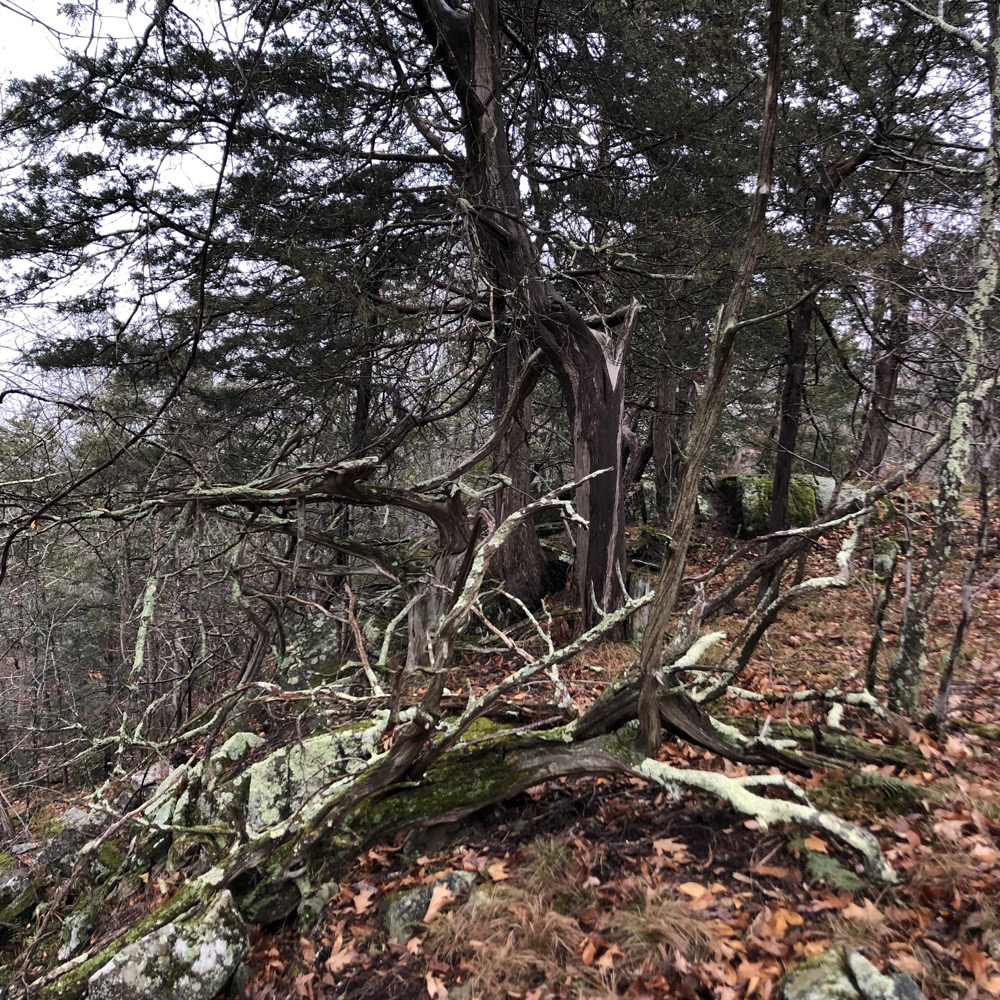 From that point, it’s not too much further to the blazed and mapped Onion Mountain Park Trails. So I decided that if and when the East-West Trail ever become official, I’ll cover the rest of Onion Mountain then, even though it will be CLCT land. Probably. Not that it matters.

At this point, I believe I can walk from Filley Park in Bloomfield to Penwood State Park and the East-West Trail trailhead, through Simsbury, to Onion Mountain, and up to Enders Falls. I’m pretty sure I’d be very close to what that trail will actually be. But by the time that trail actually is… oh who cares. It’s all in good fun.

As fun as Cajun’ Cooking with Justin Wilson. Man that guy was fun. RIP. 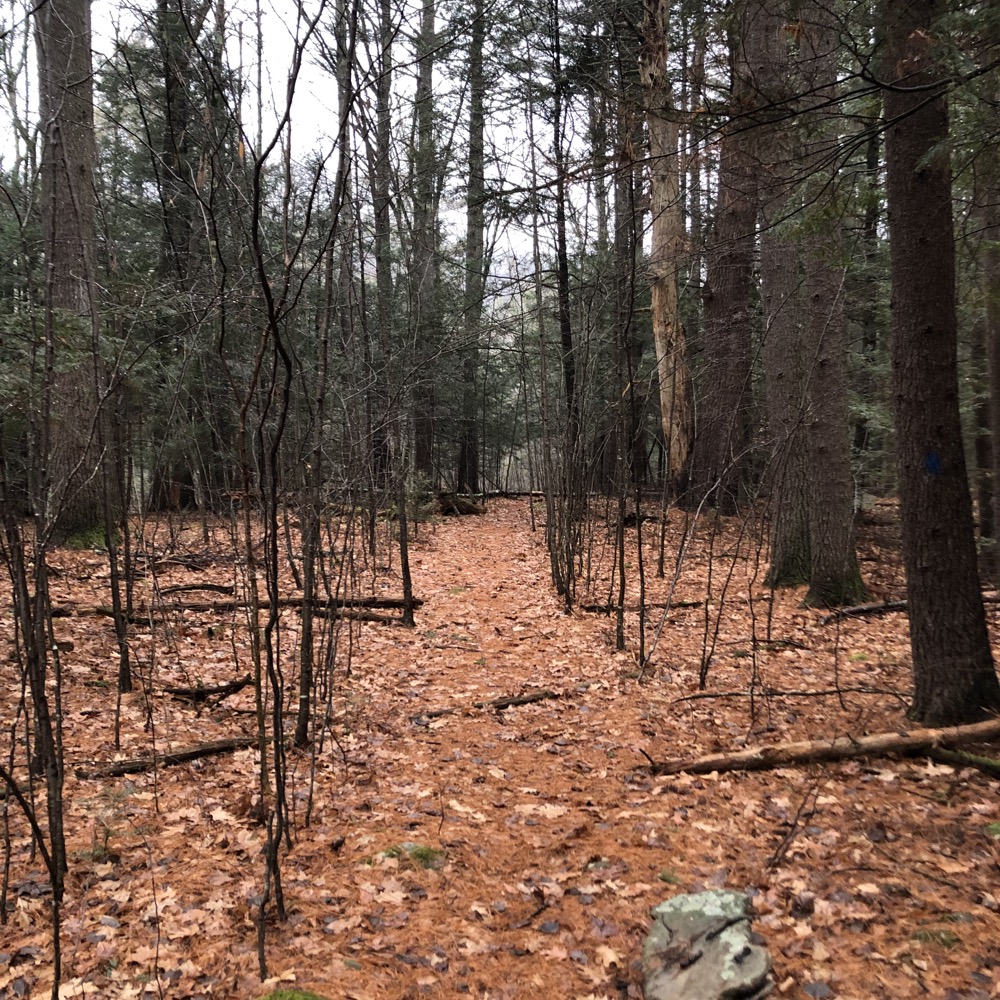 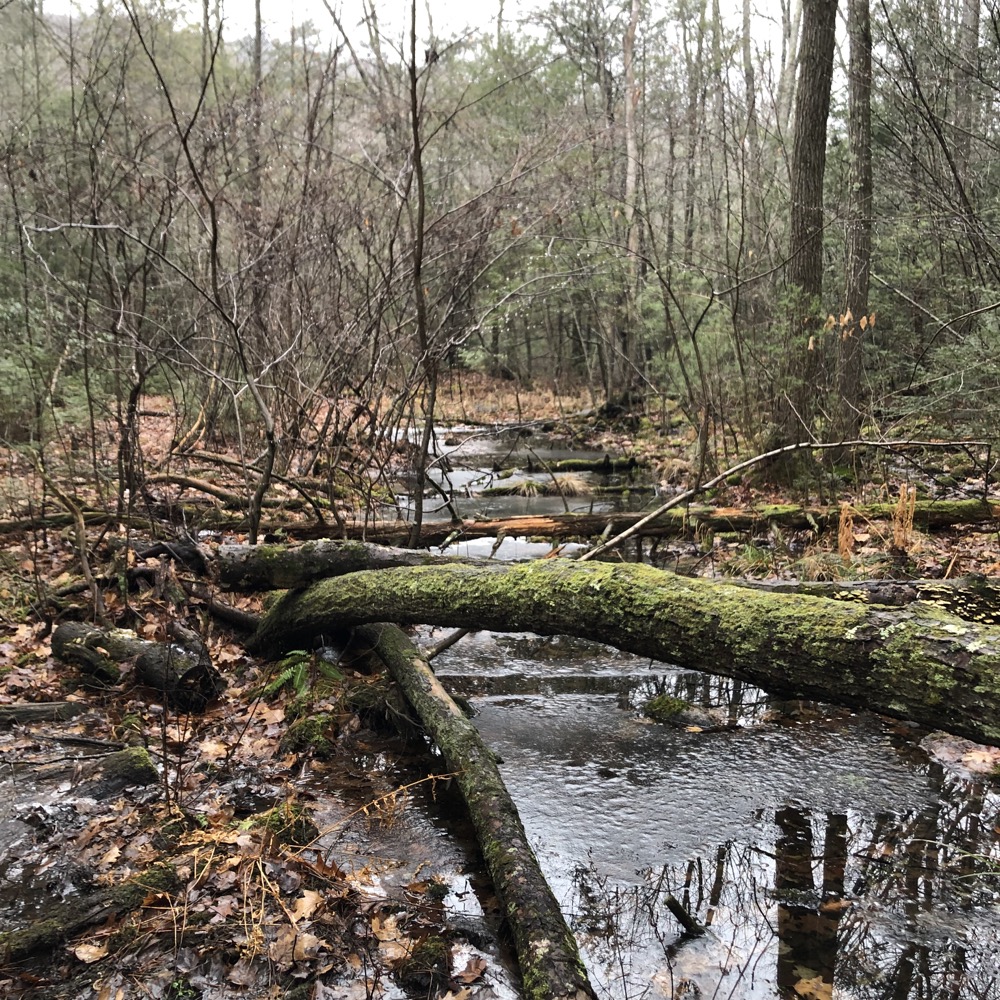 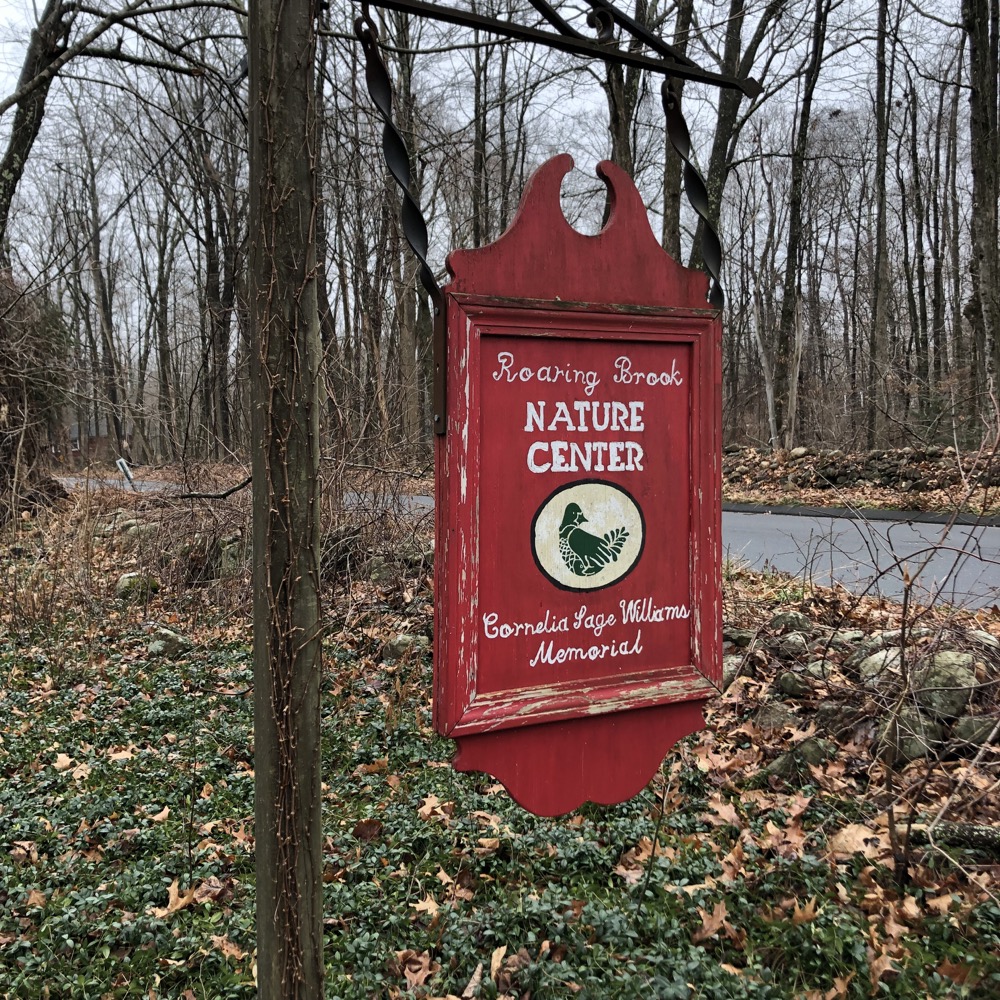