Annnnd away we go! Definitely one of Connecticut’s top few bike paths… greenways, rails-to-trails trails… whatever we call them. It bisects the state, right down the middle from Suffield to New Haven. It follows, as closely as possible, the old Farmington River Canal all the way up to Northampton, Massachusetts – by using the path created by the old railroad line that followed the Farmington Canal. More or less. 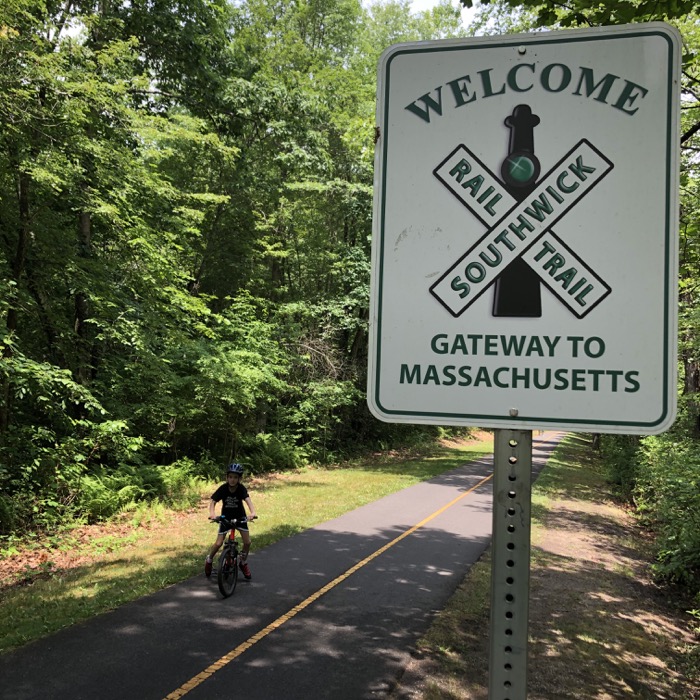 There are lots of parking lots along the whole route; giant ones even. Heck, the one up in Suffield near the border probably fits 60 cars or so. It is located at the bottom of the large cliff-out-of-nowhere that has always fascinated me for some reason.

The northern miles of the FCHT are really well maintained. It is nicely paved and someone felt the need to paint the name of every tiny rivulet that passes underneath or alongside the route. I loved that the Hop River State Park Trail posted signage at every town border, so I’m happy to report it appears the same can be said for the FCHT as well. 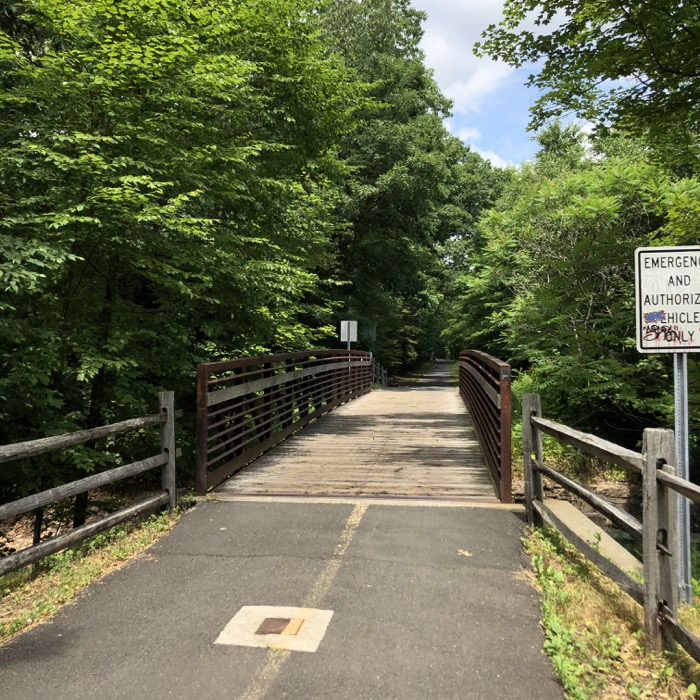 While rails-to-trails trail are usually flat and straight, that doesn’t mean they lack for scenery. I found the first miles through Suffield and East Granby to be beautiful. Rolling fields, the Metacomet Ridge to the east, tobacco barns, the Great Marsh, the stately pines of Newgate State Wildlife Area. It’s a great section to ride. 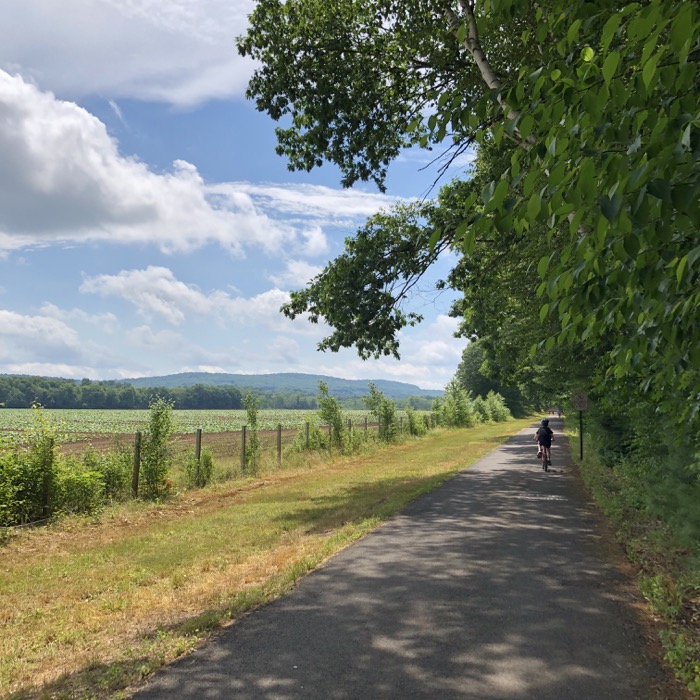 There’s no real evidence of the former canal up here in Suffield and East Granby though. But still, let’s learn a bit about this whole “canal craze” thing from the FCHT folks…

President Thomas Jefferson knew that to bind the fledgling country together a dependable national transportation system was needed. The country had doubled in size with the Louisiana Purchase in 1804. With this in mind, he turned to his Treasury Secretary Albert Gallatin and asked him to develop a plan which would connect east coast ports with farmers and merchants west of the Appalachians. Soon Gallatin presented a plan consisting of a cohesive system of waterborne transportation and turnpikes and the “canal craze” began. Throughout the United States, from Cleveland to Akron, from Richmond to the Blue Ridge Mountains, from Albany to Buffalo, canals with their sophisticated lock systems were being constructed in order to facilitate trade between the interior of the United States and its coastal ports. 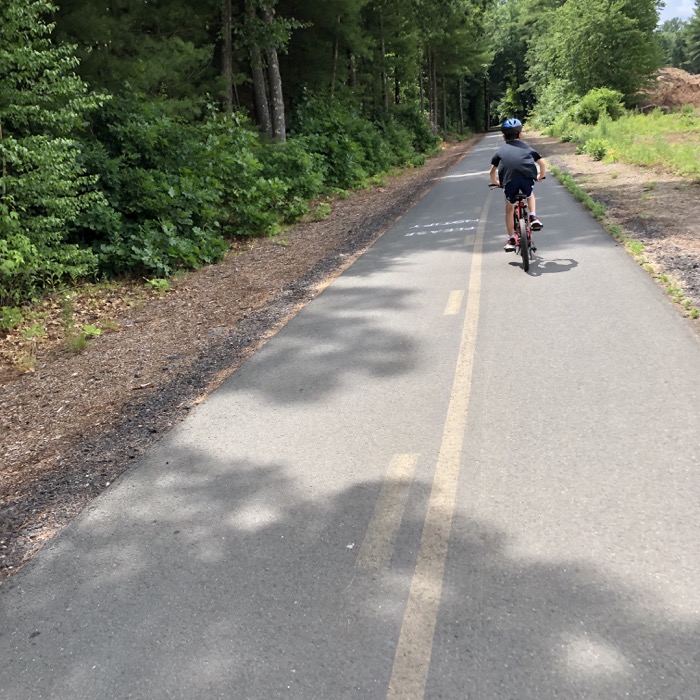 Encouraged by the success of the 363-mile Erie Canal and looking for ways to more effectively compete with the port of Hartford, a group of New Haven businessmen met to discuss the idea of a canal route from New Haven to the Massachusetts border and beyond. Led by New Haven lawyer, James Hillhouse, representatives from seventeen towns met in Farmington, CT in January 1822 and persuaded the legislature to issue a charter for the formation of the Farmington Canal Company. At about the same time the Hampshire and Hampden Canal Company was formed in Massachusetts to extend the canal from Southwick, MA north to the Connecticut River in Northampton. 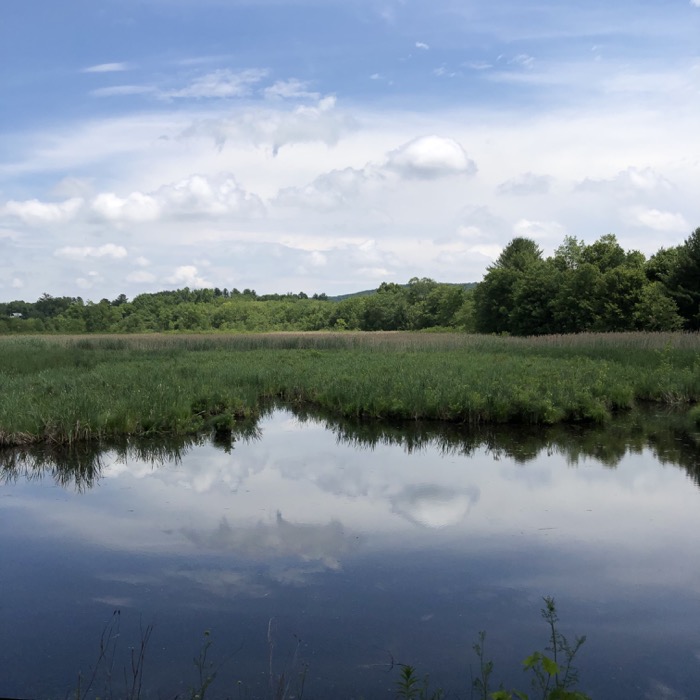 Crossing over into East Granby, the scenery changes from farmed fields to dark forests. The trail passes through the Newgate Wildlife Management Area and has a bench and pull-out at the trailhead for The East Granby Land Trust’s Great Marsh Trail.

It’s not a long trail, so I left Calvin to rest and snack at the bench while I quickly did the loop. I’m not sure how many people make the effort to do it, but the land trust puts the effort in to blaze it and keep it clear, so I was happy to check it out. 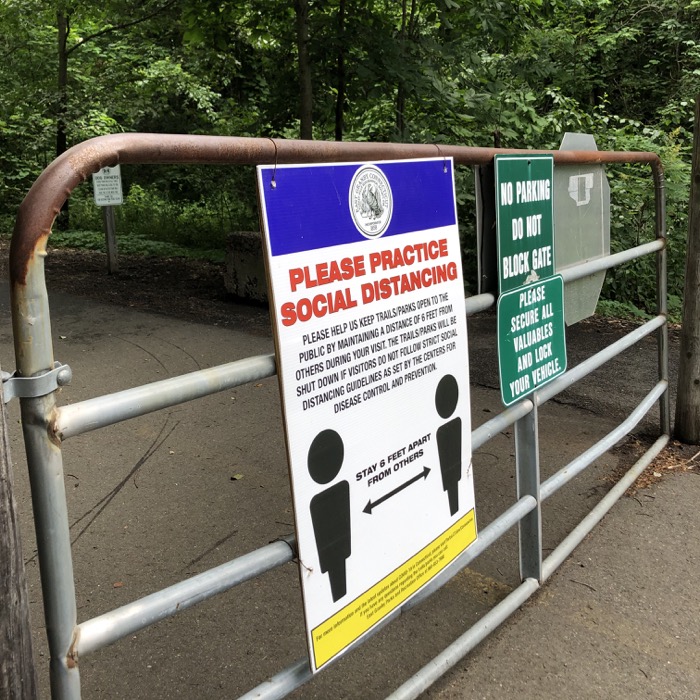 On July 4, 1825, ground breaking ceremonies were held at Salmon Brook Village in Granby, CT. Governor Oliver Wolcott had the honor of turning the first shovelful of dirt. The shovel broke – an ominous sign of things to come.

The Canal Corporation was beset by problems at the outset. Chronically under-capitalized and receiving no financial support from the State of Connecticut, the Corporation was forced to employ construction shortcuts with the predictably disastrous results. The canal leaked at many points, the banks collapsed and aqueducts were washed away. In addition, farmers, unhappy that the canal encroached on their land, sabotaged the work. 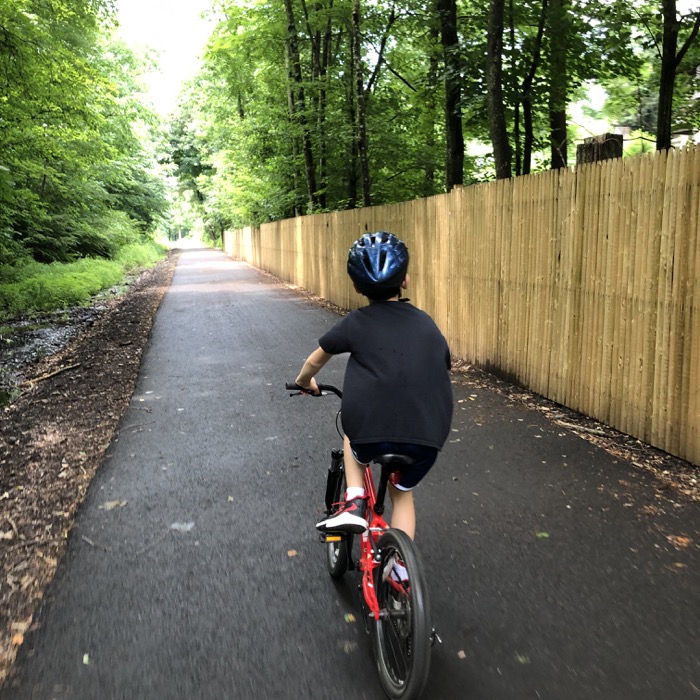 Calvin and I were having a better time riding along the trail. Although it was quite hot, we were shaded almost the entire way. I realized how much more Calvin enjoys this to hiking in the summer and I can’t say he’s wrong. Riding the paved bike trails is a very pleasant way to spend a summer afternoon. 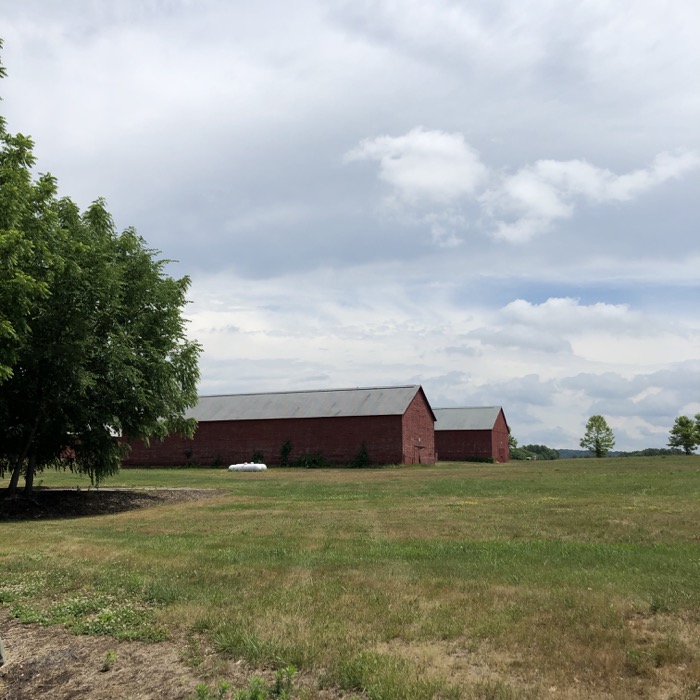 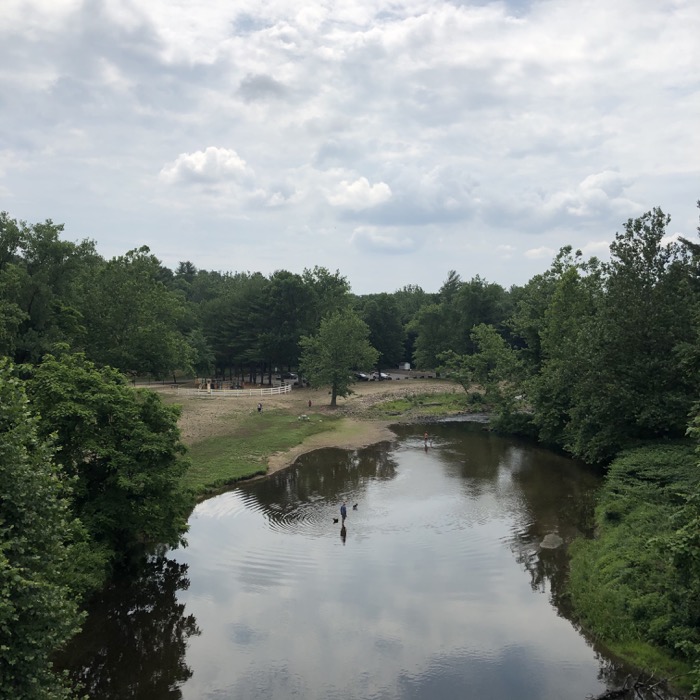 There’s another large parking lot at the route 189 crossing where the above barns still stand. Also here is the first of several old train (canal?) buildings along the route. Some towns have converted them into other uses, and some seem to have just kept them because they look sort of cute? 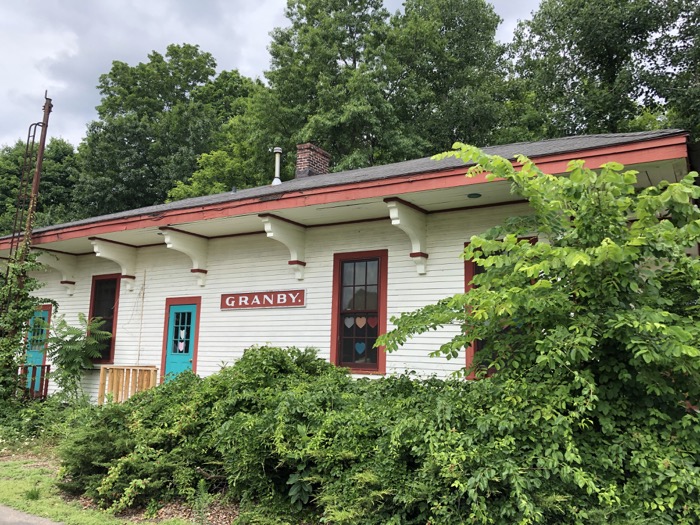 Let’s get back to the history.

Despite the setbacks, the company persevered and in 1828 the first commercial canal boat, the James Hillhouse, left New Haven bound for Simsbury, CT. In 1835, the canal was finally completed from New Haven to Northampton, a distance of 84 miles. A series of 28 locks in Connecticut provided a drop of 220 feet from the Massachusetts border to New Haven. On average the Farmington Canal was 36 feet wide and four feet deep with a 10 foot wide towpath. The canal boats themselves were 85 feet long and were pulled along by horses or mules. During its heyday the canal carried a variety of cargo through the Farmington Valley, but was never able to turn a profit. Bowing to the inevitable, the shareholders of the Farmington Canal Co. petitioned the legislature for authority to build a railroad. In 1848 commercial operations on the Canal ceased.

The trail’s journey into Granby is mildly interesting. A series of 90-degree turns to avoid the massive Monrovia Nursery makes for a fairly odd section. There are several blind curves here and please, Tour de Francers, chill out. Little kids on little bikes are taking those curves the other way and smashing into one of them isn’t worth your Farmington Canal Heritage Trail Strava speed record. 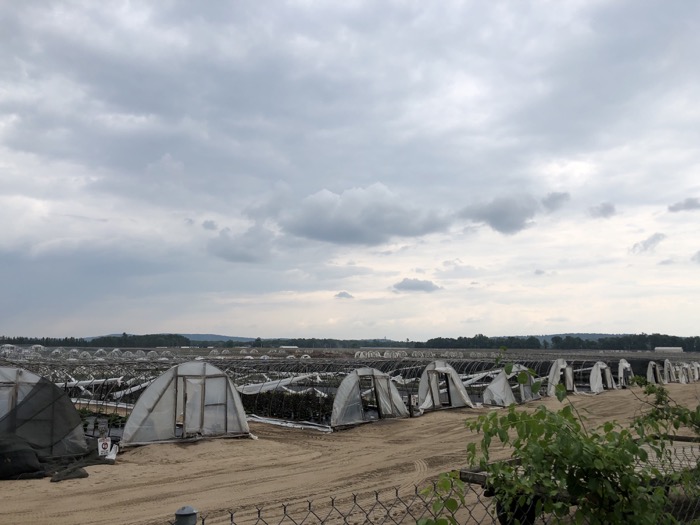 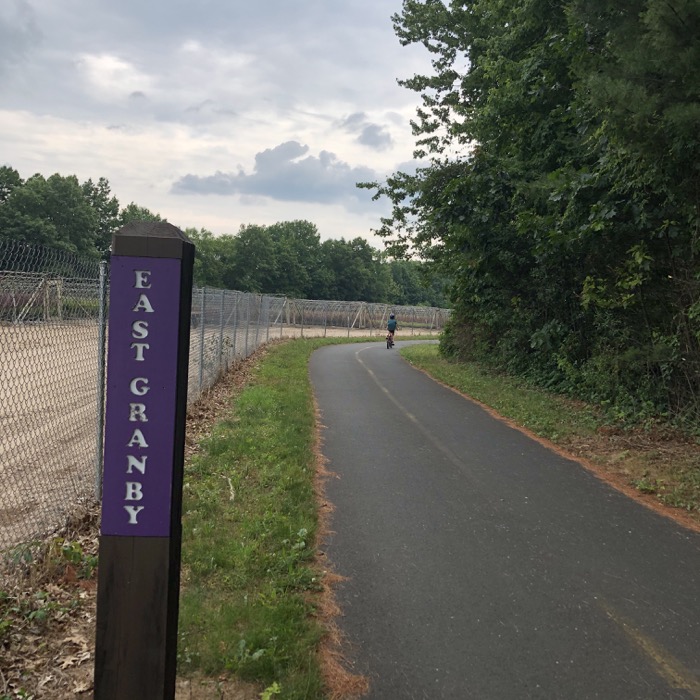 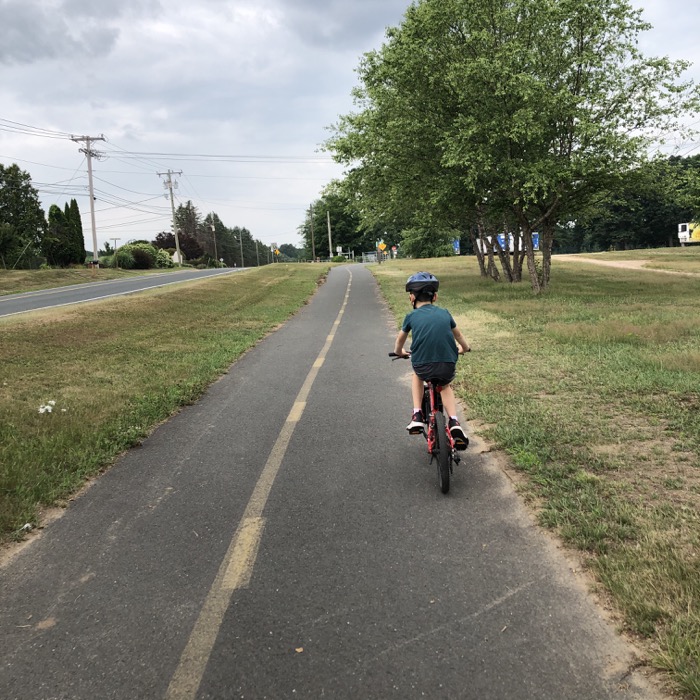 After the nursery nonsense, there is a stretch along sidewalks – to again, avoid nursery property. It’s not the worst thing in the world, and provides a bit of scenery change I guess. This stretch isn’t as dangerous as some of the previous road crossings in Granby and East Granby – be careful people! Make sure there are NO cars or that they’ve stopped before crossing routes 20 and 189.

At some points on the trail, there are some vestiges of the rail line that this trail follows. As with most canals, the one was replaced by a railroad. 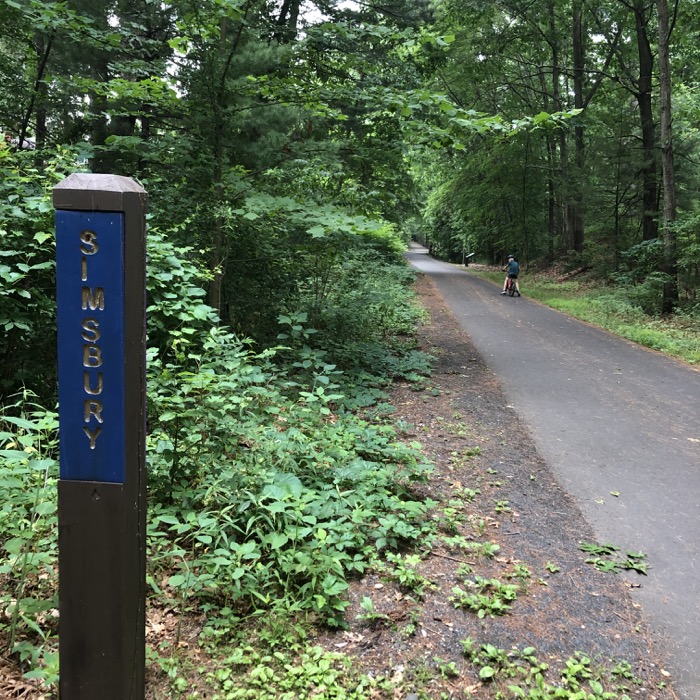 While many factors led to the demise of the Farmington Canal, none was more important than the invention of the steam engine. In 1831 an English built locomotive named the John Bull established once and for all that the steam engine would provide the next enduring development in the transportation evolution. By the mid-1800’s, more than one hundred separate railroad companies operated in Connecticut. The New Haven and Northampton Railroad Co. was chartered in 1846. Dubbed the “Canal Line”, the first section from New Haven to Plainville was completed in 1847, mostly along the route of the canal. By 1850 the line had been completed from Plainville to the Massachusetts border with branches out to Tariffville, Unionville and Collinsville. By the late 1800s, the small private lines were merging with larger companies. In 1872, the Canal Line was consolidated with the New York, New Haven & Hartford Railroad. The New York, New Haven & Hartford operated until 1969 when it was consolidated with the Penn Central. 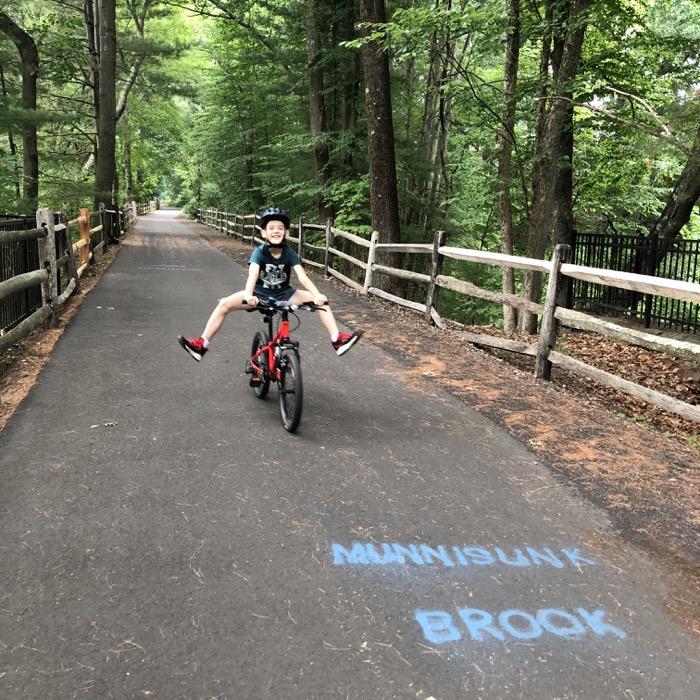 Somewhere in Simsbury, we passed by Lake Basile. While not far from my house, I’d never heard of Lake Basile, so Calvin and I detoured off the path to check it out. It’s weird. It’s just a small lake (more of a pond, really) with a large web presence and an association and everything. And now I’ve given it greater web presence, here! 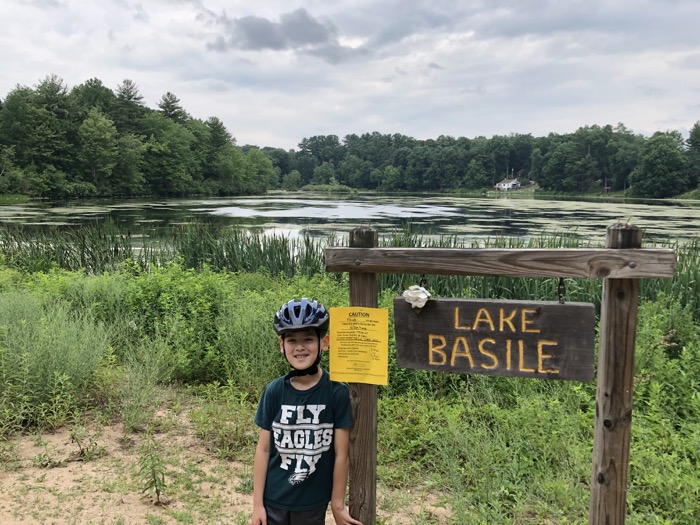 Oh the sights you’ll see along the FCHT!

As we neared Simsbury’s Center, the crowds increased as there are essentially unlimited access points and infinite parking along Iron Horse Boulevard. At one of the lots – one of the ones dedicated to FCHT access – we passed our first one of these: 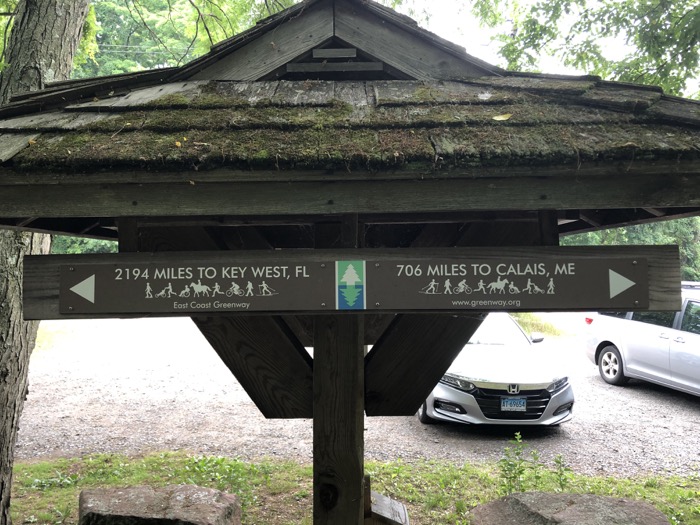 Awesome. The FCHT had joined the East Coast Greenway which, as you can see, travels from Calais, Maine to Key West in Florida. This ambitious effort is an ongoing one, with sections being completed all the time. Connecticut’s bit is pretty well completed in all but Fairfield County.

It enters the state in Sterling and follows a series of trails: Moosup Valley, Air Line, and Hop River before connecting to the FCHT in Simsbury. (If the Bloomfield Greenway expands on both ends, that will be the connecting piece.) Once in New Haven, it has some issues getting to New York, but it’s being worked on by those who do such things. 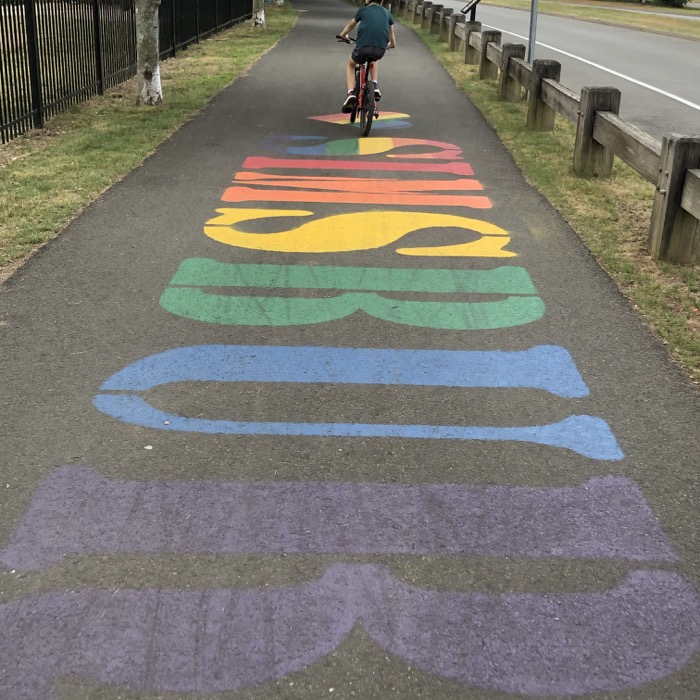 I want to assume everyone who lives anywhere near Simsbury is familiar with Iron Horse Boulevard. It’s actually kind of like a real boulevard, except for the fact that its tucked behind a long strip of businesses. But that’s what makes it great – very little traffic, long and straight.

Any long-distance cyclist can find any type of cuisine here and plenty of stellar bars at which to drink. (Yes, I’m fully aware that boozing in the middle of a long bike ride is probably a dumb idea. But if you’re dumb, hit up the Red Stone Pub. Not only does it have a good tap list, it’s historic!) 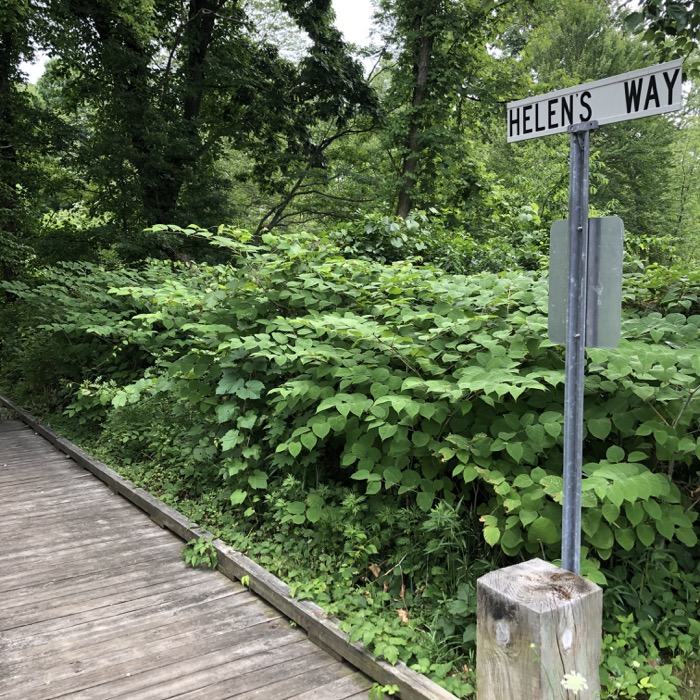 On the other side of the bike path, there are sports fields, the band shell at Simsbury Meadows, and Helen’s Way. This is a short boardwalked path that whisks walkers away from the hustle and bustle of civilization into the marshes nearer the Farmington River. At one time there was a huge heron rookery at the end of the pathway… which may or may not be active if you visit.

I’ll end this section at Drake Hill Road, but at least it ends with a bang. 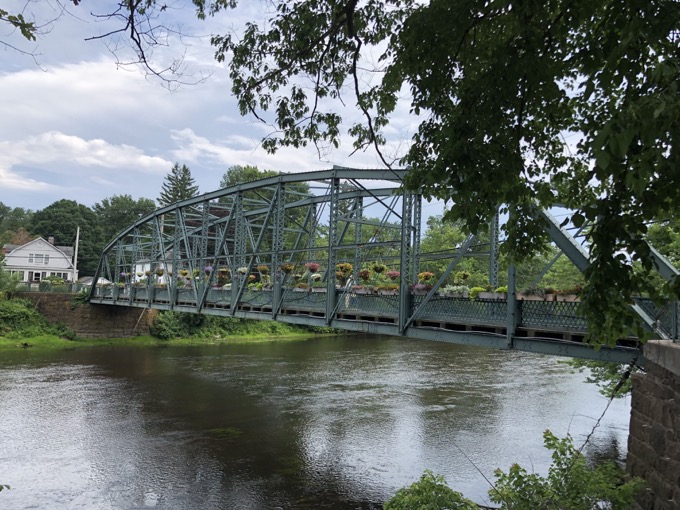 The FCHT travels only maybe one hundred yards on Drake Hill Road, but there’s a lot going on here. The trail goes right, out to Hopmeadow Street. At that point, the Farmington River Trail spokes off and heads on its 28-mile loop west, reconnecting with the FCHT down in Farmington.

Making a left turn at Drake Hill Road will take you the hundred yards to the historic and beautiful Drake Hill Flower Bridge and the new park Simsbury created there. Oh! But there’s more!

This same stretch of path, from the flower bridge to Hopmeadow Street will also be the CFPA’s East-West Trail, connecting Penwood State Park in Bloomfield to the Appalachian Trail in Cornwall. 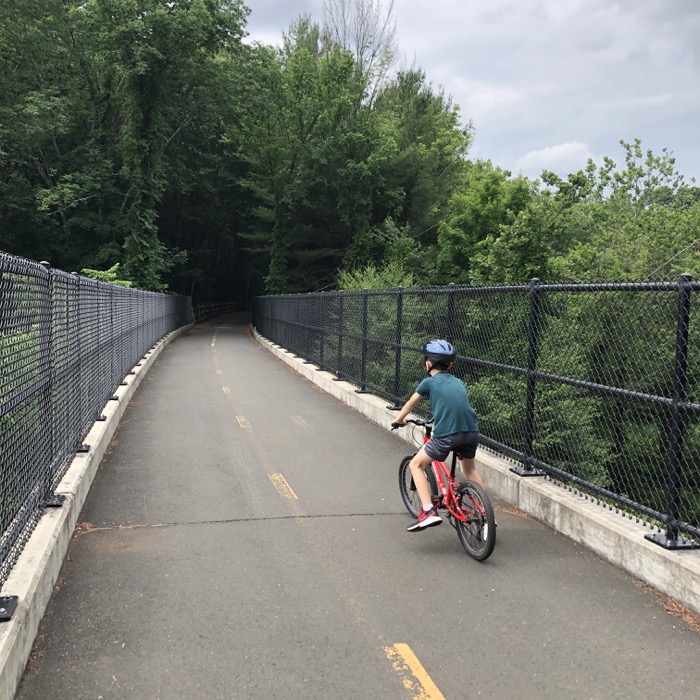